I've been tagged by Funky Doodle Donkey to take part in this meme. 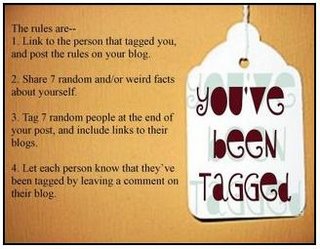 It has taken me about 10 days to respond to the tag, so we shall have to see how I go about writing up weird (as opposed to mundane) facts about myself and I'm still undecided as to whether I will tag other people. [In answer to your next question, yes. I do tend to get very tetchy and cranky when I am studying].

I am loathe to tag anyone in case everyone finds that they are too busy! Well, I'll tag here but not contact via email - how is that? No pressure then. :0)
Just A Plane Ride Away
Martin
Phoenix
Ivanhoe
Thomas
Bas
CK