Back from New York

So I’m back.  Actually, I got back on Sunday night which is two days ago but I have pretty bad jetlag and I am very, very tired on top of that.  I had ambitious ideas about spending the week blogging and finishing it all up by the end of the week but that’s unlikely to happen; I’m more likely to spend the week doing absolutely nothing instead.

To put it into perspective, when we went on our road trip in December, we would see one, maybe two attractions in a day.  I found that pretty tiring but to be fair, I was sick.  I was seeing three or four attractions a day in New York, walking three to five miles every day and I walked a record-breaking 7.8 miles in 30°c, humid conditions on Friday when I was in DC.  I sound like I’m complaining – I’m not.  I had the most amazing, wonderful trip and I saw so much.  I’m just very much in need of a mental holiday right now.  I also need to get back into Greenwich Mean Time which means I am not staying up until 3am again tonight and I am going to go to sleep shortly!  I hope.  Jetlag is meant to be worse going east to west but I’m feeling really weird at the moment.  :)

Anyway… I will start posting the photos and stories soon.  I kept a paper diary while I was in the US which I will post along with my stories.  You’ll get an insight into the things that go through my mind when I spend a week alone!  I won’t be able to upload all of my photos on this blog though.  After sifting out the blurry shots and the duplicates, I was left with 521 photos.  If you take the numerous shots I took of the Washington Monument out of the equation, I’m still left with a good 500!  (I fear some weird sort of Illuminati conspiracy because I couldn’t stop taking photos of the Washington Monument). 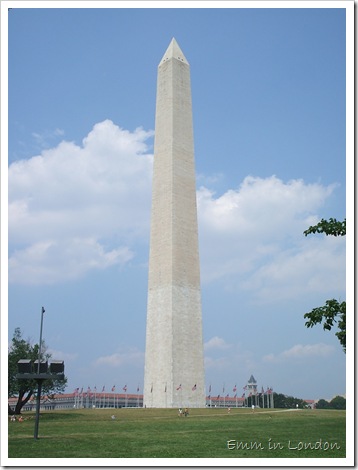 Exhibit A: one of numerous photos accused took of Washington Monument