Welcome to this edition of World Blog Surf Day: Food Edition and hi to everyone who has clicked over from DaveAvenue.  This WBSD has been organised by Sher from Czech Off The Beaten Path and is the second such event to be organised.  The idea is that each expat blogger shares some of their experience and then links to another expat blogger so that you, the reader, can take a virtual trip around the world.

Food I miss and eating like a South African in London

I’ve been an expat my whole life.  My tagline should actually be ‘professional expat’ as opposed to ‘eternal tourist’!  I was born in South Africa and we moved to England then Nigeria then back to England by the time I was five and then returned to South Africa when I was nine.  My father hailed from Liverpool though and returned there a couple of years later.  After spending 25 years in South Africa, I consider myself to be South African through and through.  I am mostly fluent in Afrikaans and my heart and soul belong to that beautiful country at the tip of Africa.

While in South Africa, I craved English sweets such as Flying Saucers and Cadbury’s Buttons.  Those are easily transported in a suitcase and for 25 years my cravings were periodically met as I visited UK or friends visited us.  If only it was that simple getting good old South African favourites over here!  The things South Africans miss the most can’t be simply put into a suitcase and up until a couple of years ago, our favourites were near impossible to get in England.

Now South African shops are opening all over England and you can buy products online too and thus it was possible for us to have a good old South African braai last weekend. 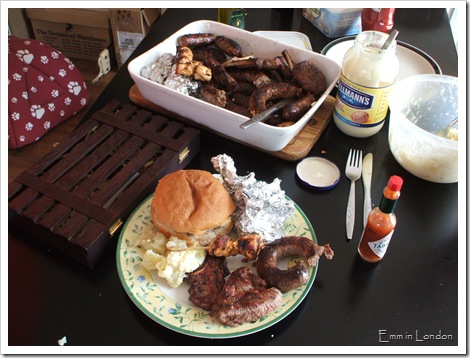 Braai is the Afrikaans word for barbeque and it is universally used in South Africa to describe the art of cooking meat outdoors on an open flame.  We use charcoal or wood and firelighters, heat the fire up to its hottest point and then cook the meat as the fire cools down.  This gives the meat a distinctive smoked taste.

We consider a braai to be very different to a traditional barbeque because of the meat we cook on it.  No cheap hamburgers or sausages for us.  There are a couple of vital items in a good South African braai experience:

Boerewors is a very long, pure beef sausage that is presented as a coil in a tray.  The word boerewors is an Afrikaans word that is literally translated as “farmer’s sausage”.

One of the guests at our braai last Saturday told how he used to take his grandmother’s secret mix of herbs and spices to a butcher in north London to get them to make up boerewors for him.  It took a couple of tries for him to convince them not to bulk up the recipe with cereal but eventually the butcher must have tasted the sausages because he has made them to order ever since.

Sosatie is a skewer with chunks of chicken or lamb on.  The important thing is to marinate the meat for at least a couple of hours or overnight so that it absorbs the tasty flavour.

Another vital ingredient in a braai is marinated chops, steaks or chicken pieces.  The meat drips with marinate as it is moved onto the braai and is usually really tender and succulent.

As you can see from Stephen’s plate above, the meat is the focus of the plate but most people also pile their plates high with salads.  Salads are  a central part of the braai experience.  Apart from your standard greens and coleslaw, potato salad made with mayonnaise and egg is also a firm favourite.

There is one other traditional part of a braai that English-speaking South Africans like us aren’t as keen on and that is mieliepap.  This is a porridge made with maize meal and it is served with a tomato and onion relish.  It is most popular amongst the Afrikaner or black populations in South Africa.

There are a couple of other items that we love to get at the South African shop.  I usually go to the SAvanna shop in the Vaults at London Bridge. 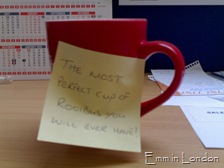 I love my colleagues. One of the biggest things I miss from South Africa is rooibos tea. Pronounced roy-boss (not ruby bush like my colleagues say) rooibos is literally translated as ‘red bush’.   It is naturally caffeine-free and full of anti-oxidants and can be enjoyed with milk and sugar or black, with lemon and honey.  I found this cup on my desk the other day and it truly cheered me up!

Caramello Bears are chocolate bears with caramel inside.  I eat the heads off first and then the bodies.  They look just like koala bears and are most likely an Australian import.

Milo bars are chocolate bars made from Milo.  Milo is a Nestlé chocolate drink that is available just about everywhere in the world except for Europe and the US.

And last, but certainly not least, we have biltong and droëwors.  Biltong is a dried, cured beef that is similar to beef jerky.  I like very dry, lean biltong and I don’t like the biltong in London as it tastes like dried British beef to me which is exactly what it is!  Droëwors is literally translated as ‘dry sausage’.  I have never been a fan of droëwors as it has a faintly alcoholic taste.  Stephen and my brother love the stuff though so I usually buy them £15 biltong and £10 droëwors at a time.

You can imagine that shops and butchers selling boerewors, biltong and droëwors are making a roaring trade in England as it is not legal to bring these items into the country and they must be made here.

Please click through now to Emmanuelle at Winning Away.  Emmanuelle is a French expat living in Vancouver, BC and she has a wonderful, professional blog on how to ‘Live Your Expat Life to the Fullest’.  Have a wonderful World Blog Surf Day!