Last Tuesday my colleague Marilyn and I went along to a Pizza Express Spring Social to launch their new Spring menu.  They apparently often do events like this with all of the foodie bloggers but on this occasion, they decided to invite a whole bunch of London bloggers. 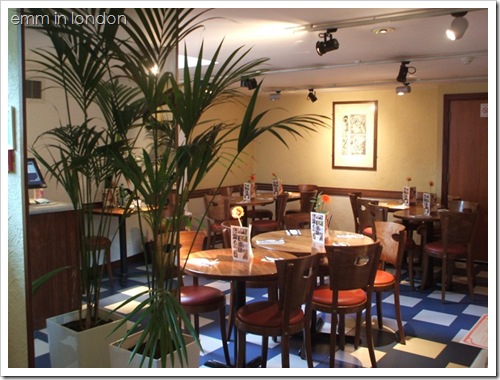 The evening was hosted at the Pizza Express just off Old Street in EC2A.  On arrival, we were each given a goodie bag which included a bottle of their very own red wine, Sangiovese, a Pizza Express light salad dressing and a Pizza Express apron.  It seems that they had a good idea of just how much mess a bunch of bloggers would make when we got hold of some flour and dough!

It was the first event of its kind that I have been invited to and I must say, I felt right at home! 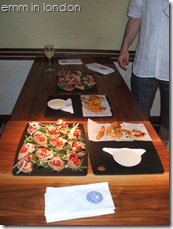 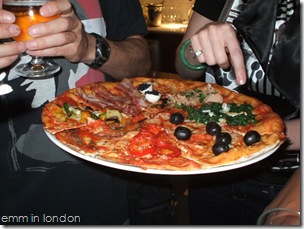 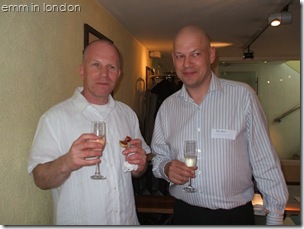 The sparkling wine flowed freely while we helped ourselves to some hors d’oeuvres and chatted to other bloggers.  We ate some of the Election Pizza where different ingredients represented some of the biggest issues of the day including money, education and healthcare (see their YouTube channel for an explanation).  It was great to meet some of the people I have known for ages in the blogosphere too!  Above from left to right is William Wallace from London Is Cool, Pete from The Londoneer and me. 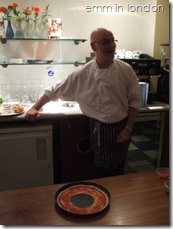 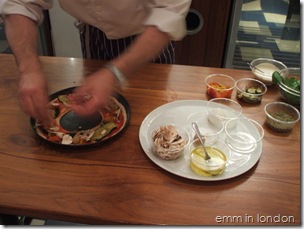 Pizza Express executive development chef Antonio Romani was there to teach us how to make the Leggera Pizzas.  Now, for the longest time, Stephen and I have visited Pizza Express whenever we go to the theatre because I simply love the Leggera Pizzas.  The word “leggera” derives from the Italian word for light and the idea is that they take the doughy middle out of the pizzas and replace it with a salad.  I think the nice PR ladies at the event were quite surprised to hear me gushing about the pizzas before they even began their presentation! 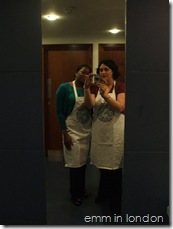 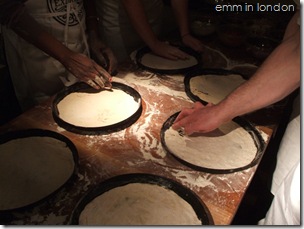 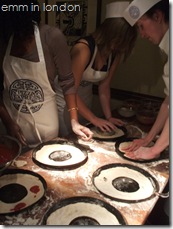 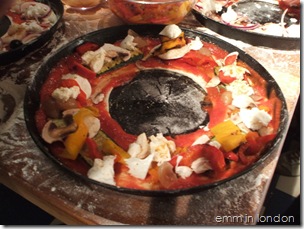 Soon, it was our time to make some pizzas and after rushing off to the the ladies’ for some hand washing and silly-photo-taking, we settled down to work.  We were given a ball of dough and then we pulled and kneaded and rolled it until it was time to stretch it into our pans.  Then we took out the doughy middles and had to choose between the Mare E Monti or the Verdure toppings.  The former has prawns in and I think I might be developing an intolerance for prawns so I chose the latter instead which is a vegetarian option.  First I spread a tomato base, then I put rosemary, courgettes, mushrooms, red and yellow peppers, sweet baby onions and some mozzarella cheese before finishing with a light drizzle of garlic oil.  Oh, and I, um, accidentally put some chilli powder on too but thankfully did not ruin it! 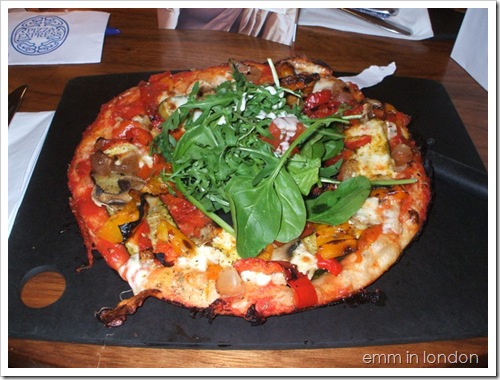 This was the end product and it was absolutely yummy!  I could not taste the chilli powder, thankfully, but I could taste the rosemary and it made such a lovely difference! I would definitely recommend using rosemary in vegetarian recipes!

It was a lovely evening and I was glad to meet so many interesting bloggers.  I am sad that I did not take her photo but I also met the lovely Mo from Fresh Eyes on London.  I remember finding Mo’s blog a couple of years ago when I was just starting out my blog and she had just got Blog of Note.  The people from the PR company and from Pizza Express were all really lovely and welcoming too, which was great.

It would be nice to go to an event like this again but that would entail me being less of a hermit and actually going out in the evenings!  Don’t say you didn’t notice that most of my photos are taken during the day!!  I really do need my beauty sleep and am not too good at going out on school nights.  [Oh, just let me feel old on this one day of the year…]