What is the name of your website?
Johannesburg Daily Photo

Whereabouts in South Africa are you?
Johannesburg

What do you do?
I’m in an IT industry, working on electronic image processing, for one of South Africa’s major financial institution.  I’m also an amateur “entry-level” photographer who enjoys capturing buildings especially the historically significant buildings and public art. I’m the author of Johannesburg Daily Photo blog.

The Big question: Are you a rugby, cricket or football fan?
All of them but like cricket and Rugby on the national level.  I’m looking at Lions and Vodacom Cheetahs in Rugby and maybe soon I will be one of their supporter.

Which team will you be supporting?
In football I support Bloemfontein Celtic FC , I’m a former Kaizer Chiefs FC supporter.  As a patriot, I also support South African National Football team know as Bafana Bafana.

Which is the nearest football stadium to your home and work?
Soccer City

Will you be attending any games?
Greece vs Argentina, 22-June-2010 at Peter Mokaba Stadium in Polokwane and Algeria vs Slovenia in the same venue on the 13th . Pity I didn’t have enough funds to book a tickets when they were released in previous phases as I wanted to attend all Bafana Bafana games. (Wow!! That is amazing!!!)

How would you describe South Africa to someone who has never been there before?
South Africa is a an unpolished diamond in which all of us have to do whatever, positive, we can to make it shine. It’s not a place for quitters nor  the faint hearted. It brings joy to one yet it can be cruel at some point but it’s desperately seeking all of us to embrace it so that it can take care of all of us. From the Mapungubwe to the stormy Cape we blessed with the beauty of nature. By me saying South Africa is heaven on earth, I will receive a round of applause from the ancestors of Hyena, the Lion, Leopards and the flourishing flowers of the Namaqualand. You have to be here to see what it means to be in heaven.

What would you say is the single best thing about South Africa?
Positive people who are embracing diversity…

Are you near to any historical places or places of interest?
Maropeng, the Cradle of Human Kind

What is the number one attraction that tourists must visit in South Africa?
So far I’m in love with Magoebaskloof, that’s one place were I found peace driving at around 40km/h

Where in South Africa do you go on holiday?
The last place I went to was Mpumalanga after spending 2 days in Magoebaskloof…I can’t wait to go to the Karoo and Namaqualand.

Do you have any advice for tourists and visitors?
Be free and enjoy the beauty of nature but be careful of people who might want to take advantage of you… Visit as many places as you can…

What can South Africans do to make the country a better place?
Work together as a collective and be able to deal with racial diversity in a positive way…

What is your dream or vision for the future of your city and country?
Joburg has got so much history especially the Inner City, it’s a melting pot of many cultures. I have a dream of Johannesburg being one of the World best Cities in the next decade and all that will be achieved if the youth of this city are being taken on board to participate on high level in decision making, after all we are the future. As for South Africa, we heading in the right direction but again it’s up to all of us to work together to make sure the dream of a better South Africa is realised. Billions of rands is being invested by the government in infrastructure development and government funded projects like Pebble Bed Modular Reactor, MeerKAT, Electricity powered car, Joule, Sumbandila Satellite etc and I hope that the private sector, some companies are already playing their role, would play a significant role in assisting the government in it’s endeavours to serve South Africans.

The last thing I demanded asked of Pule was to send me a couple of photographs so that I could see South Africa through his eyes. 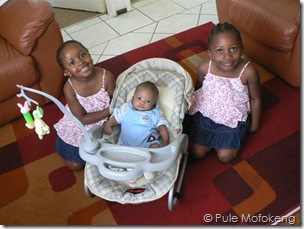 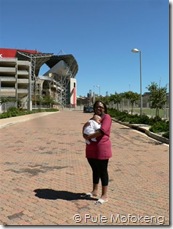 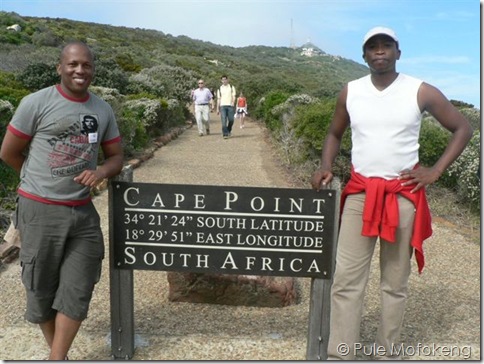 Pule (left) with a friend in Cape Town 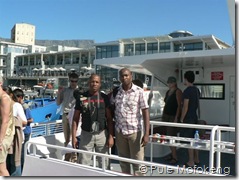 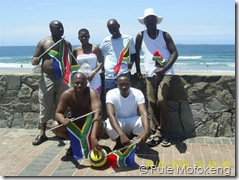 Pule with friends in Durban

It was a great treat to see photos of Pule as like any photographer, he is more often behind the camera than in front of it!  Thanks for taking part Pule!