Weekend Snapshots ~ 6: A Balmy Sunday in the West End

I usually try to do these ‘Weekend Snapshots’ posts on the actual weekend but I wanted to write up my review of the play that we saw last Sunday first.  Some of you might have noticed that posting the review didn’t go too well and I had to delete and repost it more than once on Sunday and Tuesday.  Sorry, I was just having a momentary case of the blogging blues!!

The West End is what most of you will know as the Centre of London and it has all the shops, theatres and major tourist attractions.  It includes Oxford Street, Leicester Square and Covent Garden.  I tend to hang out more in the City or Bankside near London Bridge and Waterloo but the area I really want to spend more time in is the Marylebone and Mayfair areas.  Because 36 hours a week is evidently not enough, my colleagues and I decided to meet up in Leicester Square last Sunday to watch the football and attend a play. 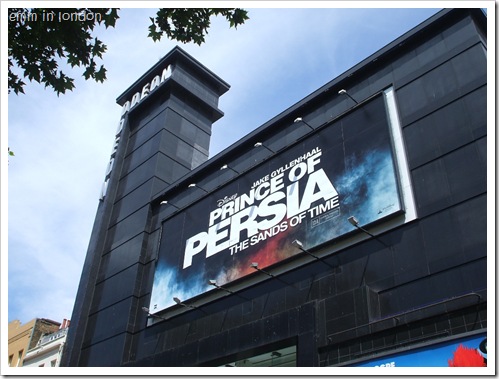 One of my favourite places on Leicester Square is the huge Odeon cinema.  You see, that is where it all began as that is where I watched Harry Potter and the Goblet of Fire which was so good that I rushed out and bought the Harry Potter books and that is what started me reading again after about 15 years of nothing but academic texts.  I digress… 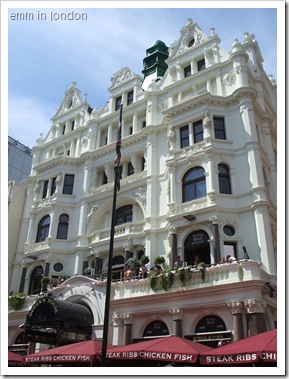 I met my colleagues at the Ruby Blue Bar in Leicester Square.  We had made a booking during the week and were intrigued that they had not asked us for the standard £25 holding deposit so it was no surprise to arrive and find out that not only was there no booking but the restaurant was closed too.  Thankfully they were serving bar snacks in the main bar which were so good that we forgave them for their booking mistake.

We all watched the England game and we were one sorry bunch of co-workers when we left the pub after England were slaughtered by Germany.  Well, to be honest, they were sorry – I was gleeful!  I’m not an England sports fan but I’m sure you won’t hold that against me!! 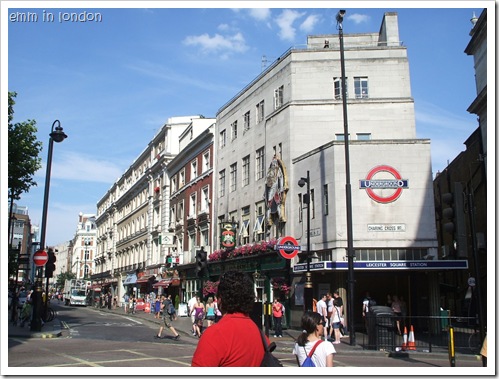 After the game, we walked on down to St Martins Lane to the Duke of York's Theatre to watch the play Ghost Stories.  If you click on the photo above, you can see why I liked that scene so much.  I loved the old-fashioned London Underground roundel with the old looking Charing Cross Road sign too. 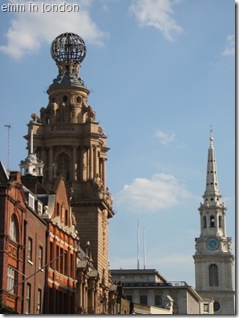 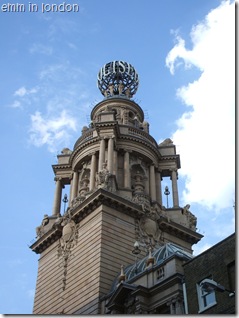 Opposite the Duke of York’s Theatre is the London Coliseum which is the home of English National Opera.  I just love that globe at the top!

After the play, we made our way down to Trafalgar Square.  I’m not sure how evident it is from the photos above but it was hot on Sunday.  Nevertheless, my long suffering husband and one of my colleagues indulged me while I took photos of Yinka Shonibare’s “Nelson’s Ship in a Bottle”. 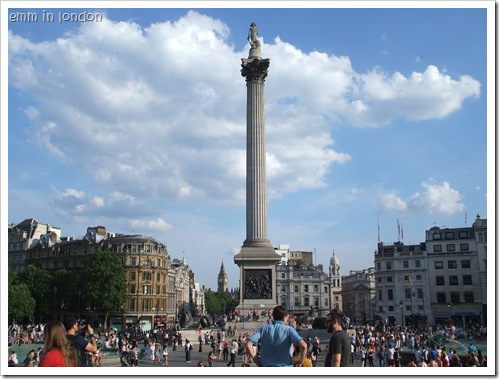 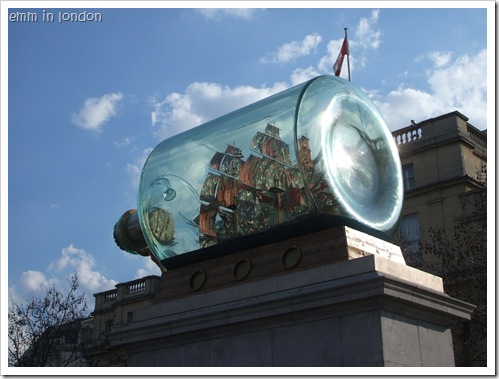 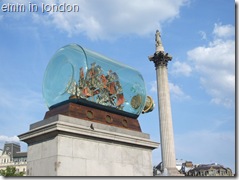 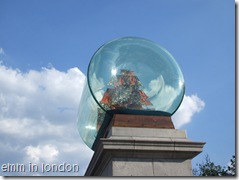 It was really very hot indeed and there were a lot of really drunk football fans all over the place. 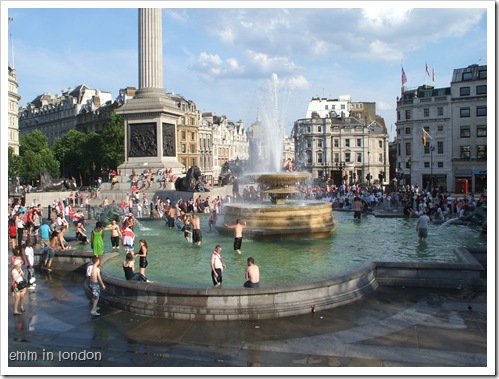 Fans in the Fountain at Trafalgar Square

That included, of course, in the fountains at Trafalgar Square.  The police were Not Amused™ but they also seemed a bit scary so I decided against taking their photo!