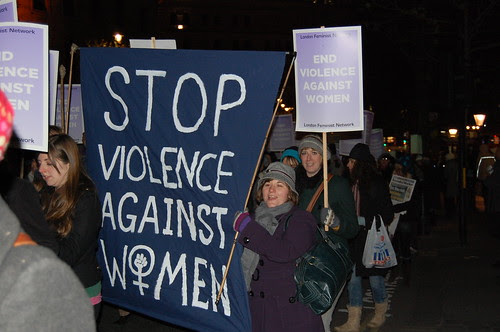 On 27 November 2010 at 6pm, the annual Reclaim the Night march will embark from Whitehall Place, central London.  Women will march to Camden Centre, Euston where they will hold a mixed rally and party.

Why Reclaim the Night?

According to the British Crime Survey (2001) there are an estimated 47,000 rapes every year, around 40,000 attempted rapes and over 300,000 sexual assaults. Yet our conviction rate is the lowest it has ever been, one of the lowest in Europe, at only 5.3%. This means that more rapists were convicted in the 1970s when Reclaim The Night marches first started than they are now. Did you know that the maximum sentence possible for rape is life imprisonment? Probably not, because rarely are rapists even reported or convicted, let alone with a realistic sentence. This situation has to change.

We march to demand justice for rape survivors.

I will be taking part in the Reclaim the Night march this year and if you would like to join me, please don’t hesitate to get in touch.  It is a women-only march but there will be a Pro-Feminist Men’s Group solidarity demonstration meeting by the Edith Cavell statue, opposite the National Portrait Gallery, also at 6pm.