I fell in love with Serbia earlier this year and cannot wait to explore more of the Balkans and Eastern Europe.  Of course, I have to convince my rather reluctant husband that Eastern Europe is the place to go.  To help me out, the kind people at HostelBookers.com agreed to write a guest post on Eastern Europe. 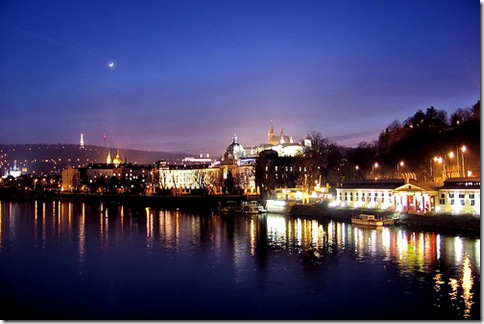 Prague Castle by Night (uploaded on Flickr.com by vlastula)

Eastern Europe is a popular backpacker’s destination. Not only is it often cheaper than the rest of Europe, it has plenty of up and coming cities that everyone is talking about. Check out our route from Prague to Krakow, Vienna, Budapest and Dubrovnik on a map of Eastern Europe. You can travel in either direction, but we’ll be going north to south – somehow it feels like going downhill. And of course, if you are visiting in the summer months Dubrovnik makes an ideal last stop where you can relax on the beautiful beaches for a few days. You might want to put aside a few weeks to do this trip. Why not get an InterRail pass and travel by train? To save money en route book hostels in Eastern Europe. 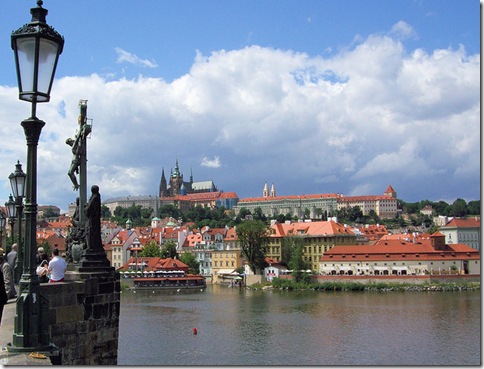 Prague Castle From The Charles Bridge (uploaded on Flickr.com by Jim Linwood)

For an alternative sightseeing tour with a local spin, hop on tram 14. You’ll have great views of Prague castle when you cross Štefánik’s Bridge, a vista across the water as you ride alongside the Vltava river and past a Gothic church before climbing a steep (steep!) hill. For a mere €1, this is a bargain. Browsing is a particularly cheap thing to do on holiday – in bookshops especially. Anagram Books (Tyn 4) is close to Old Town Square and has plenty of English titles to peruse. Prague has many teashops; in fact it claims to have the biggest number of them per capita in the world! Čajovna Jedna Báseň (Pod Zvonařkou 14) has that little something extra, it’s cosy, has two cats padding around the place and also hold little concerts on their small wooden stage so check out what’s going on and time your visit. Don’t think you’ll end up in the sticks as a backpacker on a low budget. You can find a Prague youth hostel right in the historic centre close to all the nightlife. 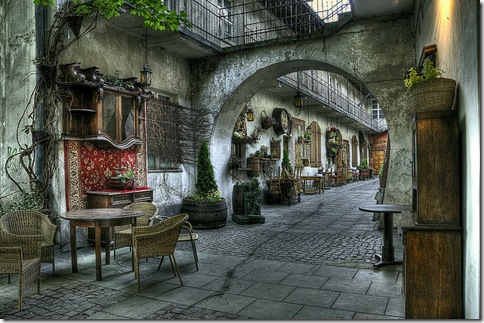 It’s easy to find green space in this city. Once you’ve explored the picturesque old town, head in any direction and you’ll hit one of the parks that surround the centre. You can track down some of the film scenes from Schindler’s List in the Jewish quarter of Kazimierz. The area is also the place to grab a huge open sandwich, called zapiekanke, for as little as €3. Here, the queues speak for themselves. You could certainly wile away an afternoon exploring some of Krakow’s beautiful Baroque churches but people also visit Krakow to make the most of the cheap drinks on offer. If you’re looking for a hostel Krakow boasts some stunning properties. 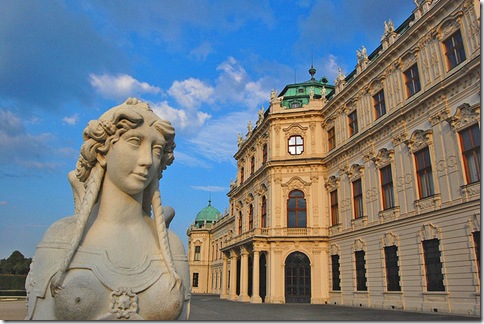 Belvedere Palace in Vienna (uploaded on Flickr.com by Tobi_2008)

A good place to mingle with students is to head to the university neighbourhood. Not only will you pick up a few tips of upcoming gigs and events but the University of Vienna (Dr. Karl Lueger Ring 1) is a particularly beautiful building with a pretty park in the centre and a good value cafe. For old-Austrian charm, head to the famous Café Hawelka (Dorotheergasse 6). Furnishings and customs have hardly changed – they even continue to sell single cigarettes out of a glass on the counter. Visit on an evening and order Buchteln, a delightful dessert. The heated open-air pool on the Danube is the perfect place to cool off in summer months and it’s open until midnight! You can continue the party at Badeschiff Wien both a bar and dance floor playing electro, and your favourite indie tracks. You can book a Vienna youth hostel or cheap hotel close to the river, train station or the city’s buzzing nightlife. 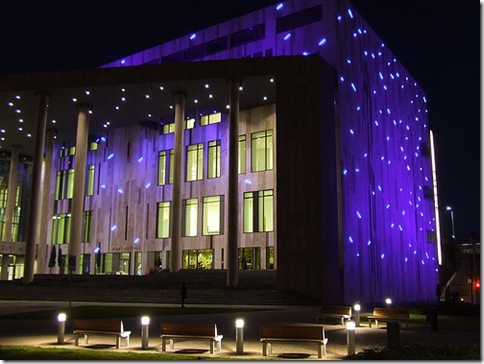 Everybody wants to find something special off the tourist track. Gerlóczy Étterem is not far from Deák Ter but it is located in a small square nearby. Don’t be put off by the well-dressed waiters, for as little as €5 you can enjoy a delicious breakfast, lunch or dinner in this quaint spot with outdoor seating. If you have the midnight munchies after a night on the town, head to Szeraj (Szent István körút 13). This Turkish eatery which serves warming Turkish tea and hearty fast-food is popular with locals and is open 9am until 4am. Művészetek Palotája, MűPa (Komor marcell utca 1) is a centre for culture and because it is not located right in the city centre, it is often overlooked by visitors. Take tram 2 for a 15-minute ride to Millenáris Kulturális Központ. You’ll find a contemporary art gallery, concert halls and the national theatre all housed in the spectacularly modern building. Don’t forget to visit one of the beautiful bath houses such as Gellert or Szechenyi, as much for the architecture as for the relaxation. You can find a Budapest hostel in a historic building with plenty of character. 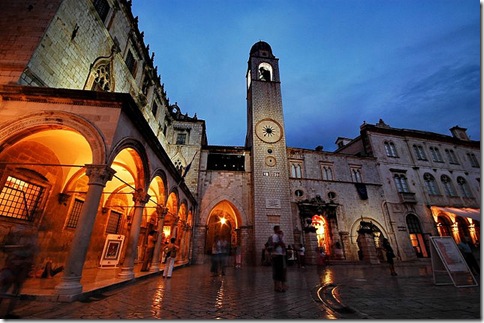 Saturday in Dubrovnik (uploaded on Flickr.com by dediva)

There are lots of lovely nooks and crannies to explore in this beautiful walled town on the gloriously blue Adriatic coast. Days on the beach are always cheap so pick up picnic treats from the market on Gunducileva Square. To escape the city, you can make a day trip to Locrum for a spot of peace and quiet, and yet more lazing on beach. The ride will cost you less than €5. If you are looking to stay in a youth hostel Dubrovnik offers limited choice inside the city walls, it will also be more expensive.

Madeleine Wilson is a travel writer for the budget accommodation website, HostelBookers. She specializes in guides and low-cost travel solutions for destinations around the world.