A short while ago, David from CabbieBlog ask me to take part in the London Grill, a series of interviews where Londoners are asked to reply to ten questions about their life in London.  In return, I asked David to contribute a guest post on an aspect of London, anything from a snapshot to a photo essay.  This is what he had to say. 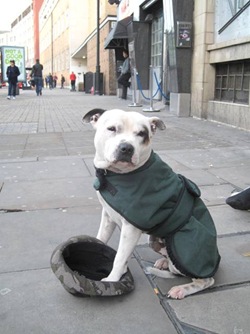 London is a competitive place, even if you have to live from what you can get on the street you need that edge. One entrepreneur seems to have the right business plan.

The owner of George can be found most days on Shoreditch High Street sketching to make a living, while his dog has to pay for his keep.

George sits patiently with his paw resting on the peak of an upturned cap expecting the odd small change to be dropped into it. Not surprisingly George is the most successful in the area at obtaining donations. 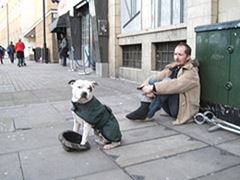 David is a Licensed Black London Cabbie since 1997 and over that time and the five years that it took to gain “The Knowledge”, he has grown to love and despair of London in equal measure. Why spend money sitting in a cab listening to whingeing from your cabbie, when you can sit in comfort at home and read it for free?

David blogs at CabbieBlog and you can catch up with him on Facebook or  Twitter: @CabbieBlog & @LondonCabbie.