Cotton, Steam and the Inn That Moved

There is no doubt about it, Manchester is a great destination for shopping, football and night clubs but I have to remind myself that there is so much more to this city. Once a small and unimportant town in the Lancashire countryside, Manchester exploded during the Industrial Revolution to become one of the most important cities in the United Kingdom.

They say that cotton was the cloth that cut Manchester and it all began in the 14th century when Flemish weavers moved to Manchester and began a long tradition of cloth manufacture. It was not until the 18th century that cotton mills were built all over Lancashire and the surrounding counties and linked to Manchester via a series of canals. To this day you can take Cotton Walks around surviving city centre mills and canals. 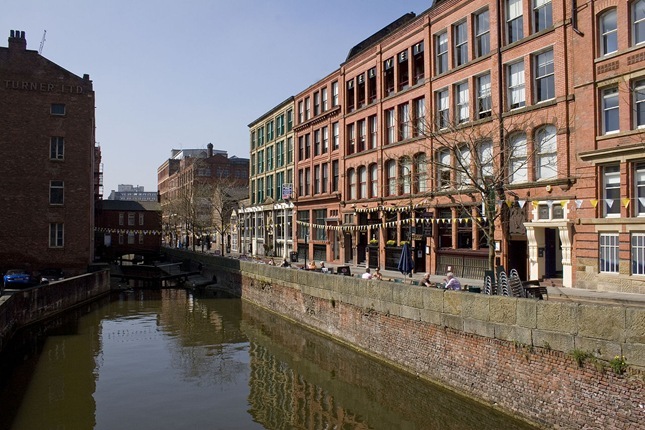 Canal Street, Manchester uploaded by Parrot of Doom on Wikipedia

It was in 1781 that the first steam-driven textile mill was built on Miller Street for Richard Arkwright, heralding the introduction of mechanisation that saw Manchester and surrounding towns become responsible for 32% of the world’s cotton production by by 1871. In just 90 years, Manchester became known as Cottonopolis and the face of the North West was changed forever.

There is one pub that has stood since the very beginning of Manchester’s history, albeit not in the same place, and that is the Wellington Inn. This half-timbered building was built in 1552 in the Shambles next to the market square. In 1830 it became a public house and by 1865 it became known as the Wellington Inn.

It was in 1970 that Manchester was experiencing another boom and space was needed to build The Arndale Centre in the city centre. Recognising that the Wellington Inn was of significant cultural and historical importance to the city, it was painstakingly disassembled and relocated to the Shambles, a strange location in the shadow of the imposing Arndale. Reopened in 1981, it was always such a surprise to happen upon this medieval pub, tucked away as it was in the midst of the steel and chrome of the Arndale. 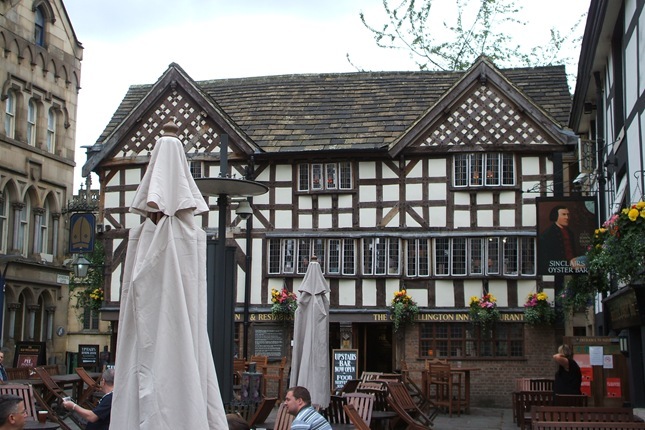 On 15 June 1996, the Wellington suffered extensive damage in the Manchester Bombing. It was refurbished and reopened in 1997 but in the wake of the bombing and subsequent redevelopments, the decision was taken to move both the Wellington Inn and neighbouring Sinclair’s Oyster Bar to a location 300 metres away. Now located in Shambles Square, the Wellington Inn was reopened in 1999 and remains a welcome respite from the shopping madness in the city centre.

There is so much that Manchester has to offer and it is just a short three hour train ride away from London Euston. Rail fares start at £12.50 if you book in advance. While there, you can visit Old Trafford and Etihad Stadiums, go on Cotton Walks and tours through the old canals and WWII air-raid shelters, eat the best Chinese food in the North West in China Town, club at some of the best clubs in the country and yes, shop until you never want to see the inside of a shopping mall again. Most importantly, make sure that you stop off for a pint in the Wellington Inn and definitely try their fish and chips.