Ancient Treasures of the Turkish Riviera

It is strange how quickly travel plans can morph and change. No sooner had I published my travel plans and aspirations for 2014, when my attention was drawn once again to the Turkish Riviera. My friend Sarah moved to Fethiye on the Turkish Riviera a couple of years ago. Like any good friend, she sent photos of sunsets over the Mediterranean and cocktails on the balcony in mid-winter when the temperatures can rise as high as 25°c. Suffice to say, I have always wanted to visit Sarah but I was often discouraged by the cost of flights from London. Confoundingly, flights from from Birmingham or Bournemouth seemed rather more reasonable!

So what sparked my interest again this week? I spotted some pretty reasonable flights to Dalaman flying out of London airports including Gatwick and Stansted. Now I love Turkish cuisine but I’m not sure I could take another week of meals in a Turkish hotel (if you’ve ever done it, you’ll know exactly what I’m talking about), so I’m planning a week in an apartment on the beach.

One thing you need to know about Turkey is that the history of this region is truly ancient. Johannesburg was only founded in 1886 and South Africa colonised in 1652, so I am already in a perpetual state of amazement in London with its Roman ruins dating back 2,000 years. In Turkey, you come face to face with great civilisations dating even further back in time and I’m really keen to investigate the ancient treasures of the Turkish Riviera. 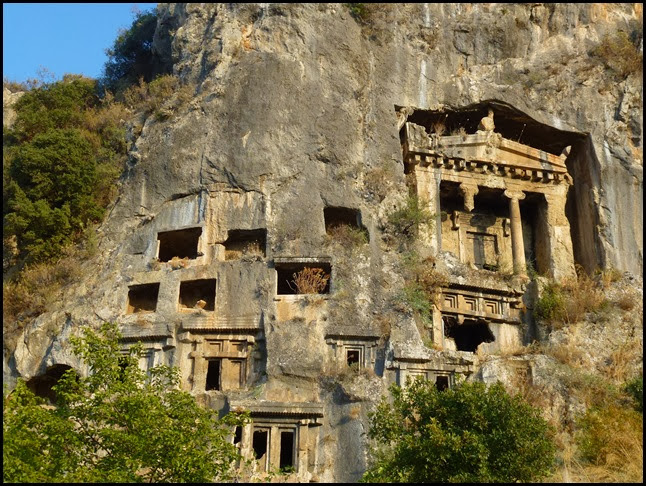 Fethiye will be naturally be our base as I want to spend as much time with Sarah as possible. Fethiye is built on the ancient Lycian city of Telmessos, whose origins date back to the 5th century BC and the ruins of the Telmessos Theatre (which were excavated in the mid-90s) are currently being restored.

What I really want to see is the Tomb of Amyntas. This beautiful Lycian tomb was built in 350 BC for Amyntas, son of Hermagios. The Lycians carved many tombs into mountainsides but the Tomb of Amyntas was carved in the form of an Ionic temple complete with pediment, architrave and two Ionic columns. As you can see from the photo above, the Tomb of Amyntas is especially large inside and larger than the surrounding tombs. 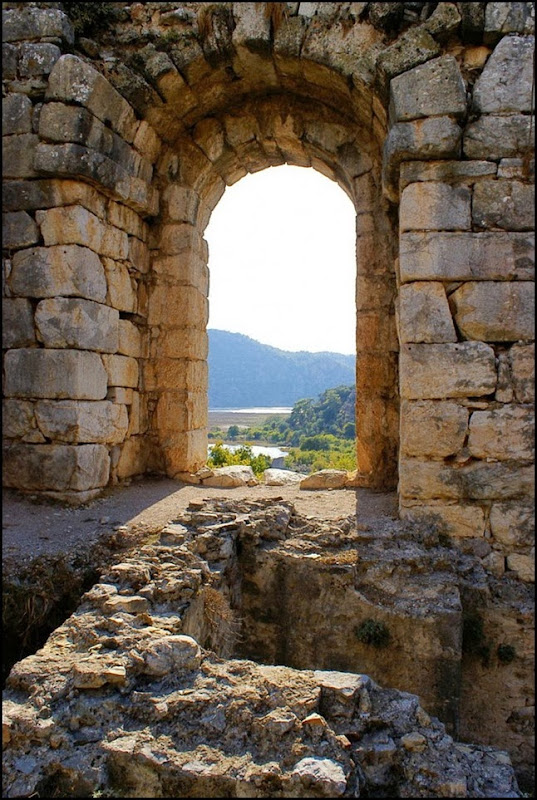 Dalyan is equally well known for its Lycian tombs, in some way grander but less accessible than the Tomb of Amyntas. But it is the ruins of Kaunos that really attract me. These sprawling ruins are located high on a hillside overlooking the Dalyan river. What is most interesting about these ruins is that Kaunos thrived right up to the 15th century when it was abandoned so there are Lycian, Hellenistic, Roman and Byzantine ruins. 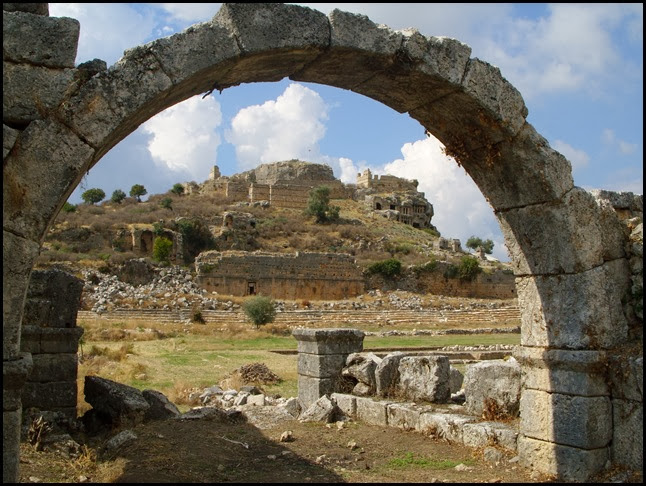 Not wanted to impose complete ruin fatigue on Stephen (you may recall castle and church fatigue), I had to make a choice between the ruins of Knidos on the Datça Peninsula or Tlos near Kalkan.

I chose the ruins of Tlos because in many ways they are simply more interesting. Settlement in Tlos began an incredible 4,000 years ago and this was the largest and most important of the Lycian settlements.  Like Kaunos, it was inhabited by Romans and Byzantines but it was the arrival of the Ottoman Turks that saw this region being inhabited right up to the 19th century.

Tlos really has it all and here you can find the ruins of Lycian rock tombs, a Roman amphitheatre, a Byzantine church and an Ottoman castle.

I can see that I’m going to have to spend some time in the British Museum to learn more about the Lycians! If you’re interested, the flights that I found were through flythomascook and start from £42.99 one way.

Do you think there is a special place where discarded travel plans go to hide? Have you made any great changes in your plans this year so far?