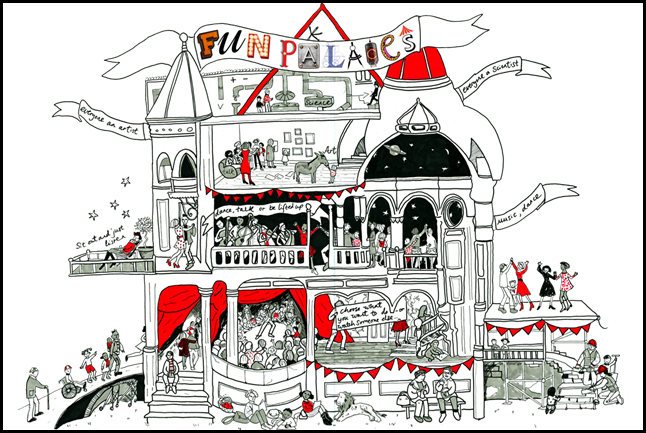 One of the recurring themes that I see across social media and other blogs is how often my friends express a desire to get back in touch with their creative side. Very occasionally, but certainly not often enough, we’ll actually make a plan to do something fun and creative, like when we went to the Biscuit Café in Greenwich to paint our own ceramic plates and vases. If you’re one of those people who is just itching to get paint on your hands (or preferably on a canvas in a flawless interpretation of your artistic abilities) then you’re going to love Fun Palaces.

On the weekend of 4 and 5 October 2014, venues across the country are planning a weekend of free, local, educational arts and cultural events. You can build a bridge with the Royal Engineers in Medway, become a mad scientist on the streets of Deptford or learn to play violin in the Barbican Music Library!

I caught up with Stella Duffy, co-director of Fun Palaces to find out a little more about the event.

Hi Stella, thank you very much for agreeing to interview with us today.

Can you tell us a little bit about the origin of the Fun Palace concept?

In the late 1950s and early 1960s, theatre director Joan Littlewood and architect Cedric Price (along with cybernetician Gordon Pask, and many others) began considering a different kind of venue – somewhere that would bring modern technological innovations to bear on the arts and sciences, a venue that was malleable and temporary, a venue that would change as the people needed it to change, it would be possible to hold vast events there or many tiny talks. It would be a space that would feel welcoming to all people, that wouldn’t feel as daunting as some of our big institutions did then (and many still do). Somewhere where people wouldn’t have to worry about the cost of entry (it would be free), or what to wear when they got there (anything they wanted), or if there would be something they wanted to see or do when they were there – the range would be so wide and so eclectic, from lectures on mechanics to learning to play an instrument to maths games or the chance simply to have a drink and take it all in – that that everyone, of every age, would feel – and be – welcome. Unfortunately that space was never built, although they very nearly got the money and the location right, al the necessary things never came together in the end, and so the plan, but not the idea, was shelved. We’ve seen other incarnations, some successful some not, since then – InterAction in Camden, the Millennium Dome, the Southbank Centre in London now is very much a successful modern version of the Fun Palace, as are dozens of community-oriented Arts Centres across the country. So the Fun Palace idea has never really gone away, but it was never built to Cedric Price’s amazing designs, nor in the place – east London, and for the people of east London – that Joan Littlewood envisioned.

You have been instrumental in bringing this seemingly impossible concept to life. Can you tell us a little bit about that?

I thought I was suggesting a good idea – let’s do something for Joan Littlewood’s centenary that isn’t another revival (of one of her plays). I had no idea it would blossom into this. I’m delighted it has. It shows we were ready, even if we didn’t know we were. There’s a lengthier explanation of how that all happened here.

Are the events really free?

Yes, they are really free. Many events across the UK and internationally are being created by volunteer groups, some have funding from local councils, some have small amounts of funding from the Arts Council, some have sponsorship from local shops. Where they are being run by already-established arts organisations they’re usually being funded, to some extent, by already-existing budgets. All arts organisations need to do a certain amount of local/community work and ‘public engagement’ every year. The Fun Palaces Campaign is a great way for them to do that.

Where did the Fun Palaces get their funding?

Fun Palaces HQ – 9 people, all working part-time to hold the whole together with Comms, PR and marketing, evaluation, online and digital support, access engagement (and a ton of admin!) – is funded by an Arts Council England Exceptional Award. Our website and Digital Fun Palace, entitled Everyone an Artist, Everyone a Scientist, was co-commissioned by us and The Space. The Albany have provided us with an office to work from, infrastructure support, advice and expertise in many areas we didn’t have ourselves. All three of ACE, The Space and The Albany took a chance on an idea that had no proveable outcomes, that was merely a dream, that we had no evidence for and nothing but goodwill towards. I hope the 130 Fun Palaces in the UK internationally can now show them how right they were to support us and how grateful we are for their bravery in coming along with us.

Is this a one-off event or will we see more Fun Palace weekend in future years?

We already have people across the UK and internationally signing up for 2015, so this is definitely not just a one-off. It’s also not a one-off in intent either – Fun Palaces are actively NOT fetes or fairs. They’re not just about the weekend itself, but about the planning and the preparation the communities that come together to make this happen and how the communities then grow and benefit from that coming together. They’re about what comes after this year’s Fun Palace weekend and how we build on that to make a difference in our communities and lives between now and then next one. And the next. And the next.

Is the Fun Palace weekend just for children?

Absolutely not. The Fun Palaces are for everyone. In fact, I spoke to a Fun Palace makers last week, a mother with small children, who said she is “tired of everything having to be for the children” – she actively wants their Fun Palace to have elements that are specifically for adults, she WANTS parts of it to be aimed at her interests and not those of her children. I think this is a very fair desire and that if we have events that are planned solely for children then we’re doing a disservice to their parents and guardians who also need engagement, entertainment, something to make them think, get them interested. We want Fun Palaces to appeal to everyone – that’s not the same as saying everything that’s in a Fun palace has to appeal to everyone. It’s ok to be interested in some of what is on offer, and not in other parts.

Are the Fun Palaces only in London and the south east?

No. They’re everywhere across the UK, and we also have two in the USA, one in Canada, one in Australia, two in Germany, one in France, and one in Iceland. And more are always welcome.

Thank you for taking the time to answer my questions Stella!

Enter your postcode at the Discover page on the Fun Palaces website to find an event near you. I’m thinking of visit the Deptford Fun Palaces on Saturday 4 October because I’ve simply not spent enough time in Deptford and the fun will be taking place all over the neighbourhood from the Market to Griffin Square and Deptford Lounge and everywhere in between.

Please do get in touch if you’d like to join me. I aim to arrive in Deptford at about 2pm!