London at Dawn: The Golden Hour

We knew the precise moment when dawn broke during our London at Dawn workshop in April.  One moment the world was exquisitely hued in blue, pink and light grey and the next minute, there was golden light covering every surface.  It was simply magical. 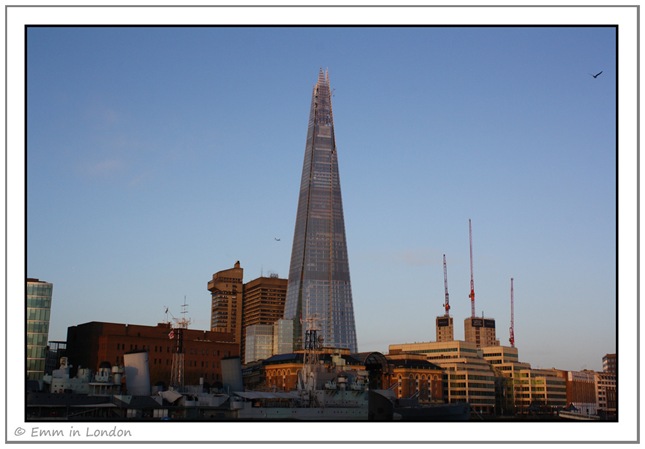 This marked the end of the first hour of our workshop and the beginning of what is known in photographic circles as the golden hour. The golden hour is the first and last hour of daylight in a day where the light is softer, more diffuse and it has a specifically golden hue.  It was lovely to behold. 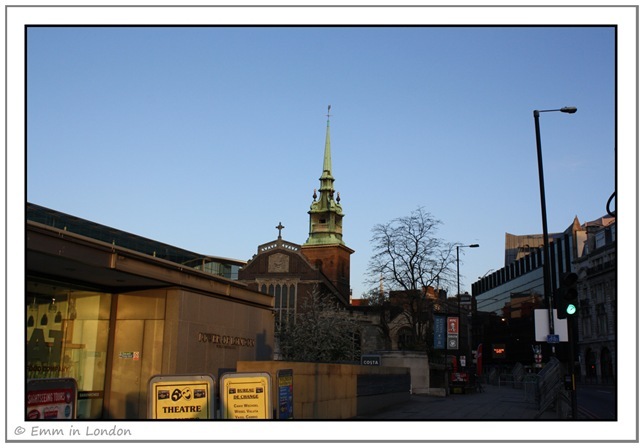 6.23am All Hallows by the Tower 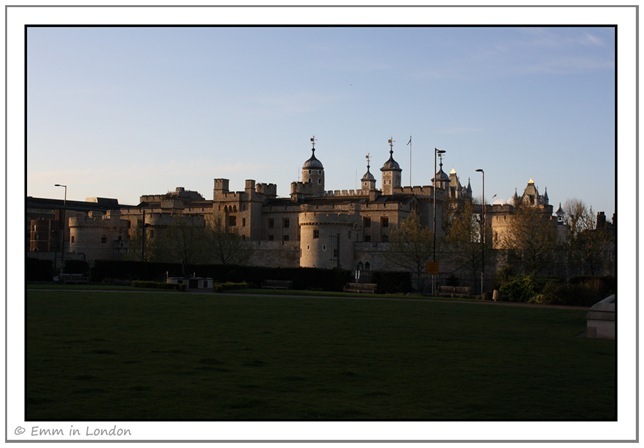 Is it just me, or is the Tower of London a specifically difficult complex to photograph?  I never seem to do it any justice. 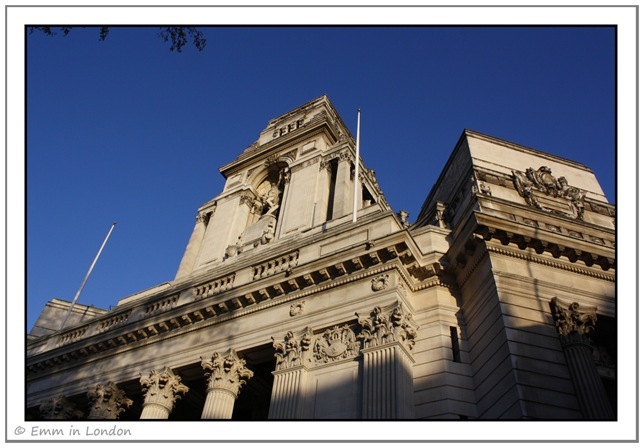 6.46am Neptune at Ten Trinity Square

I was quite enamoured by the building above, known as Ten Trinity Square.  Built in 1922 as the headquarters of the Port London Authority, this is where the inaugural meeting of the General Assembly of the United Nations took place in 1946.  That is Neptune you can see ruling the building and the seas from his high perch.

While Neptune was certainly impressive, I was far more impressed by the grace and beauty of Britannia, the goddess and embodiment of Great Britain, who sat on her throne on the eastern side of the building. 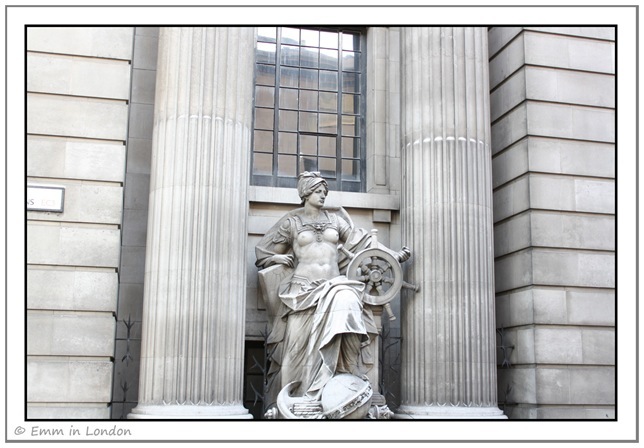 6.47am Britannia at Ten Trinity Square

Something about the tiny medieval St Olave’s Church appealed to me.  Perhaps it was the ghoulish skulls above the gate?  St Olave’s is known for being one of the few medieval churches to escape the Great Fire of London in 1666. 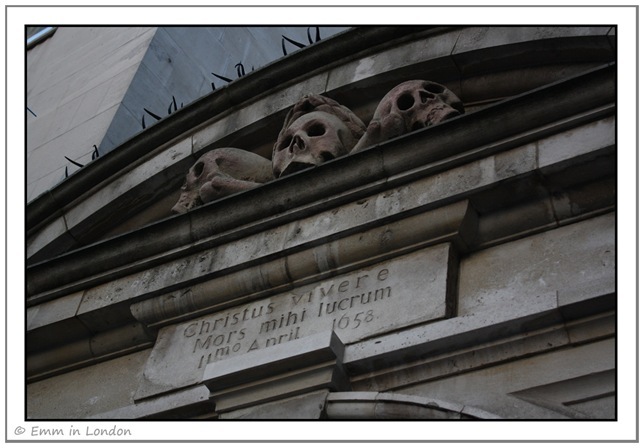 6.50am Skulls at St Olaves Church

Samuel Pepys is buried here.  He deemed St Olave’s “our own church” and it is noted on a sign beside the gate that Pepys “came through this gate from the Navy Office and his home in Seething Lane to worship here”.  The Perpendicular Gothic style of the church must have impressed Charles Dickens for the sign goes on to state that he included it in his short story collection The Uncommercial Traveller, renaming it The Churchyard of St Ghastly Grim.

As we began walking the streets of the City of London, I thought that we were noticing more people out and about.  Well, that was until I realised they were pouring out of a nightclub and were still awake from the night before! They certainly weren’t fit to publish on this site!

Instead, I looked the other way and noticed this monument to the Crutched Friars (see below).  The monument adorns the corner of the building at 6 Crutched Friars at the intersection with Rangoon Street.  The term does not imply that the friars depended on staff but is a corruption of the word “crossed”. 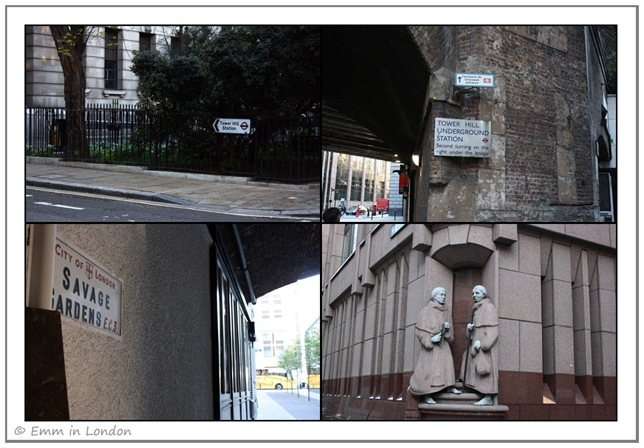 Before long, we arrived at Aldgate and could see the beautiful 30 St Mary Axe (commonly known as The Gherkin).  I must admit that it was a beautiful day to photograph this modern architectural masterpiece (I might be biased – did I mention I love this building?) and boy, did I photograph it. 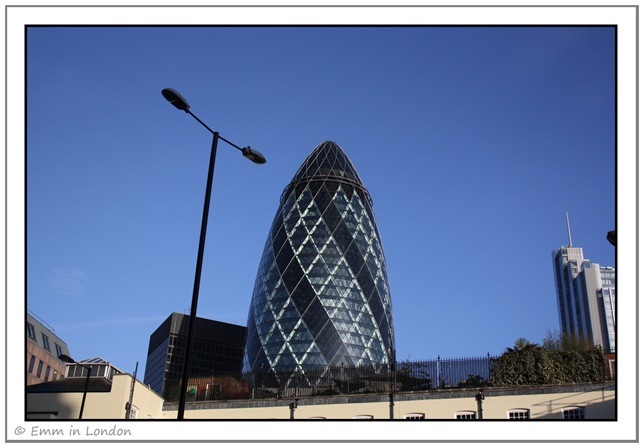 We were standing at the original site of Aldgate which was demolished in 1760.  Aldgate was the eastern entrance into the City of London through the old London Wall leading to the East End.  While there is little evidence of the existence of the gate, St Botolph without Aldgate, built in 1744, stands to this day.  The “without” part of the name refers to the fact that it stood just outside the city walls and there is a St Botolph without Bishopsgate too.

7.04am St Botolph's without Aldgate

In 1976, the Lesbian and Gay Christian Movement was founded at this church and the church still welcomes LGBT members.  The church is close to where the Aldgate Bell Foundry once stood, the home of the Bells of Aldgate. 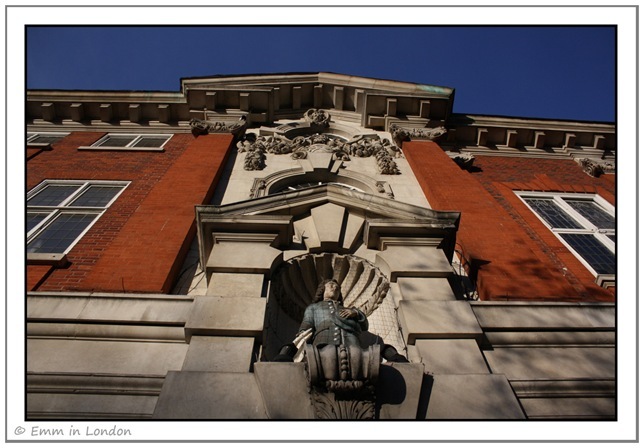 By the time we reached the Sir John Cass Foundation Primary School, the sky had turned a bright blue and we realised that the golden hour had passed.  There were still plenty of photographic opportunities to come, of course, as the sun rose high into the sky.

Disclaimer: My attendance on the workshop was kindly sponsored by London at Dawn but you can still book places on their two day photography master classes taking place on June 30th & July 1st and August 4th & 5th. I simply cannot recommend these workshops enough. The knowledge and technical skills imparted by Anthony Epes and Nick Mortimer have proved invaluable and I am still shooting on manual to this day.