At sparrow's fart, Ste and I trotted off to Carol O'Leary, an animal behaviourist in Fourways. It was a really good meeting and she was able to point out to us that Molly often struggles to settle down and she was quite a highly strung dog. She explained the whole thing about dogs being pack animals and how they are chancers - they will always test you and take a chance, no matter how well trained they are. The bad news is that Josey is probably still going to try eat my kittens (haar haar haar - she wishes she were fast enough); but the excellent news is that we have now been suitably trained and the dogs aren't continually fighting for our attention. We've become a lot stricter and our dogs don't lie on the sofas any more (scandal) but Molly is quite a serene little thing now and I can see the difference in her. Josey's position as top dog has been respected, and in fact all dogs are now fed alone. They also eat their food now instead of attempting to play us. Verdict: we did the right thing, and our dogs are much more settled for it.

Later on that day I went for a very much needed massage and pedicure at Virgin Spa in Randburg. If you play it right, their treatments can really be reasonable. The masseur is really skilled and I actually had small bruises the next day in the small of the back. I know that doesn't sound good, but I'm one of those that needs a very hard massage.

Second day of holiday, and once again we were up at 5am or something ridiculous. The reason was that my cousin Michael was arriving from England. He arrived just after a plane from Brazil landed (never seen so many people taken off for searching). We settled him in, and then we went off to Nelson Mandela Square for lunch. We went to the Butcher Shop which I seemed to be going to a lot at that time. Thank the lord the Christmas eating season is over. 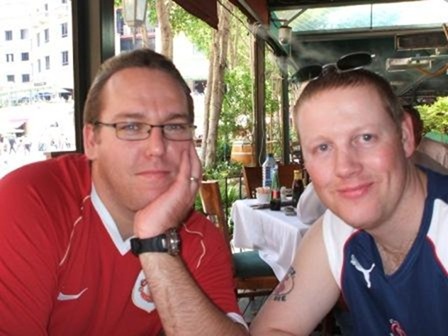 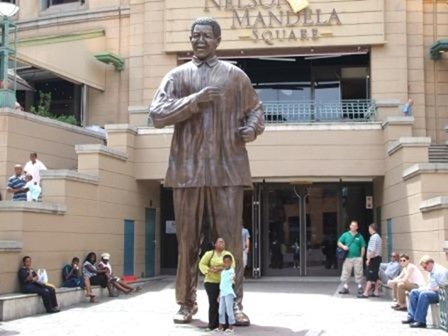 We got up early and went for a breakfast at Wimpy. Michael was pleasantly surprised to discover that our Wimpy is nothing like the ones overseas. We had bacon, eggs and sausages, and then we trotted off to The Lion Park. I could honestly go to the Lion Park five times a year - it is so awesome and exhilarating. We drove in and did our usual circle around the main reserve, where all sorts of antelopes and other animals stay. One of the highlights of this experience was getting this shot. 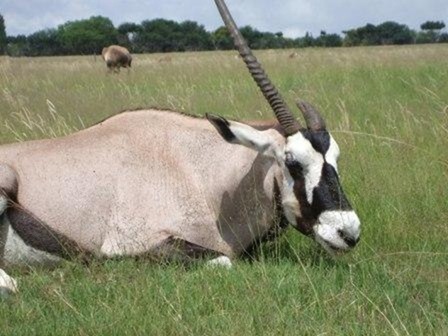 This is a gemsbok. He was a lone male and you can see from his broken horn that he has been fighting for territory. I absolutely love the grey fur of gemsboks, I think they look absolutely majestic. In any event, I was about one to two metres away from this lovely young man and the picture was shot through an open window. There were lots and lots of impala out on this day, but they were just too far away to get a decent picture. It's a pity, as impala are one of my favourite antelope. Who am I kidding? I have severe Bambi Complex. I love all of them. 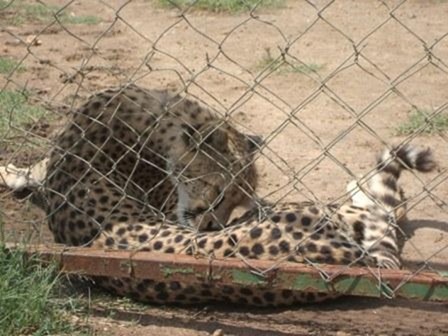 This picture was taken before we went into the big cat enclosure, so once again it was through an open window. This is a young cheetah and I imagine it was a male if he separated himself from the rest of his family who were lying in the shade. Obviously, the picture was taken from inside of my car - I'm not thick enough to get out for a closer picture - there are animals that climb to the very top of trees for a little shade and comfort. There are five lion enclosures at the Lion Park, and so once we'd driven around the reserve, we headed off to the lions. One of the things I love most about the Lion Park, is that the lions are really beautiful and well kept. Drought and fighting for resources can often lead to scraggly and emaciated lions in the wild and anyway... you'll never get this close to lions in the wild (and I don't mean through David Attenborough either):

This is a white lioness. White lions are more rare than normal lions and their appearance is a rare genetic anomaly. I think they are absolutely amazing and my heart fills with joy when I see them. Judging from the age of this lioness (I estimate 5 years), this is probably one of the lions I held as a cub when I was on my honeymoon in 2002. Amazing. Oh, and this little girl is yawning not roaring, although you would be forgiven for thinking otherwise if your car is parked next to a yawning lion! 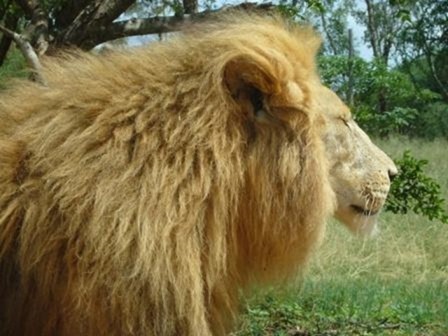 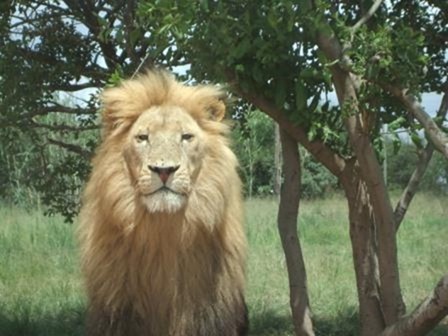 This absolutely majestic male is obviously an alpha male. He is a little bit older and is quite confident and self-assured. We were pleased to actually see a lion standing and walking as it was an absolute scorcher of a day. This male is in a wonderful condition, his mane looks like it has been washed and combed out (I promise it hasn't) and his body and fur is in a beautiful state. I wanted to take him home with me, but Michael wouldn't get out of the car. (Edit: these pictures have not been enlarged - I really was this close to the lion, but it was taken through a window of course!) 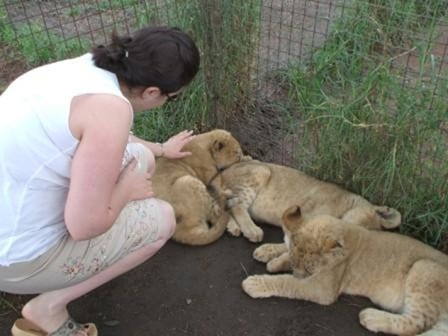 And of course, Mandy's favourite. I got to stroke the lion cubs and chat to them for a while. The lion park finally figured out that the cubs don't like thirty million tourists holding them a day, so while I'm sad that I wasn't able to pick them up, I am more then happy that they'll get some peace and quiet now. Don't you love their spots? Apparently the Rhino and Lion Park has cheetah cubs, so I want to go there really soon. I've not mauled played with cheetah cubs before. Meeps! Look at their white lion webcam!!! *faints* These things must be five or six months old. So pretty.

Michael and I got up early on Saturday morning and trotted off to Maropeng in the Cradle of Humankind. Maropeng is a discovery centre, which takes you through the birth of the world and of humankind. The most interesting things I learned was that all of humankind today descends from the Australopithecus africanus that hailed from Southern Africa. We are in fact not descendant from Neanderthal man at all. Neanderthal man occupied what would today be Europe, Asia and the polar regions, I think. At some stage, Australopithecus africanus (or descendants thereof) moved north and met up with the Neanderthals. Despite them both being hominid creatures, the two species were unable to procreate. Over time, the Australopithecus africanus became dominant and the Neanderthals became extinct. Very interesting in light of certain racist doctrines, which say that interracial procreation is not natural. If it weren't natural, it wouldn't be possible. No pictures I'm afraid - they weren't allowed inside and it was too damn hot outside to stand taking pictures.

Once again, Michael and I trotted off early and this time we went to Constitution Hill on the boundary between Braamfontein and Hillbrow. I think I'm going to cheat a little, and copy and paste what this place is about: "Constitution Hill is the new home of the Constitutional Court, the protector of our basic rights and freedoms. Constitution Hill is also the site of Johannesburg’s notorious Old Fort Prison Complex, commonly known as Number Four, where thousands of ordinary people were brutally punished before the dawn of democracy in 1994. Many of South Africa’s leading political activists, including Mahatma Gandhi and Nelson Mandela, were detained here."

I cannot begin to explain how awesome this place is. You get to walk through the cells and the complex of what was once one of the most over-crowded and squalid prisons in South Africa. Hundreds of activists were held without a trial and many were imprisoned under evil, inhumane and arbitrary laws. We were in quite a hurry, so I only managed two photos: 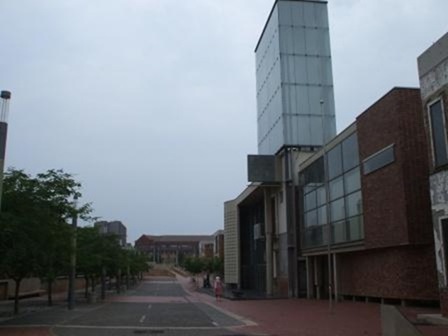 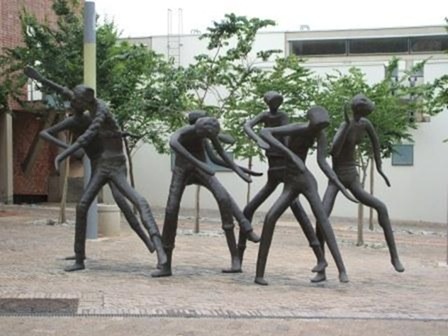 Christmas Eve and Christmas Day were held at Ste's parents house. It was nice to see the whole family, and I managed to avoid being in any photos :0). Boxing Day was held at my house. We had our usual brunch and were all passed out by 2pm. The thing I miss MOST about holidays is my daily afternoon nap.

Once again, we headed off early and met up at the Apartheid Museum with Caryl, Boris, Sara, Donovan, Keira, Michael, Stephen and I. The Apartheid Museum is a phenomenal place and is a comprehensive and astonishing collection of over 40 years of Apartheid. Unfortunately, photos are not permitted inside the museum, but these are the pictures we took approaching the entrance: 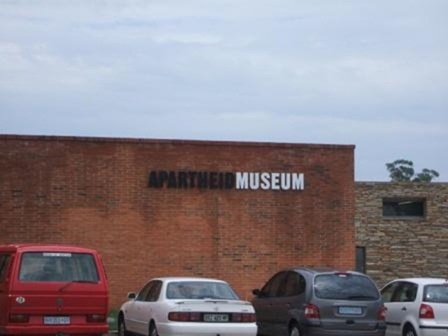 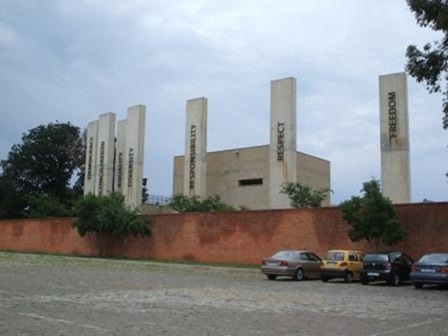