Turkey: at the hotel and into Gümbet

The one thing you'll notice in Turkey if you vacation in the middle of summer is that it is hot and we chose to vacation in July! Therefore a mixture of heat, fatigue and steam resulted in us not taking any pictures on the second day of our vacation. In fact, I totally neglected to take any pictures of the pool area at all during our entire holiday!

Nevertheless, Tuesday was quite eventful.

The hotel had a hair and beauty salon and so Stephen and I went down on Tuesday morning for some treatments. I got a pedicure and a face mask. I was really happy with the pedicure as it was the first proper pedicure I have had in ages whereby they use a razor to remove dead skin from your heels. My feet were very happy afterwards that's for sure! The whole time my pedicure was being done, I wore a face mask made of completely natural products. It was blue and Stephen laughed at me for a short while until they slapped his on! It left my face feeling really smooth and detoxed - it was great. One thing you'll notice about some Turkish merchants (although many are the exact opposite) is that they are really pushy and won't discuss price with you when negotiating services. So, Stephen went down for a shave and landed up getting a face mask and hair cut. It was probably the best hair cut he has ever had though - I was watching the hairdresser and he made sure that every single hair was in the right place (or so it seemed). By the way - all of the staff in the salon and the spa were male, which I found interesting. The shave was done with a traditional cut-throat razor and the guy even went so far as to singe the hair off Stephen's ears!!! Add tot hat the face mask and by the end of the appointment, my normally clean-shaved and well-presented husband looked really, really neat (in more than one sense of the word)!!!

The only down-side of the appointment was that it cost YTL60 (that's Turkish Lira) and we'd already spent YTL60 on another Turkish-shopping experience (as mentioned above whereby you are pushed to buy things without being clear on how much they are costing) earlier that day when we bought flip flops for Stephen and beach towels. That meant that our holiday cash reserve of YTL120 (which is €60) was gone by the end of the first day! Being in an all-inclusive hotel we had figured we'd pay for tours by credit card and need very little other cash. Suffice to say, we were sorely mistaken.

We spent the rest of the day by the pool. These aren't my pictures, but they come from marketing sites for Grand Newport Hotel and I wanted to give you an idea of just how beautiful the pool area by the hotel is: 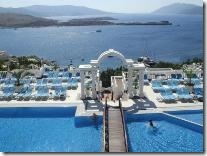 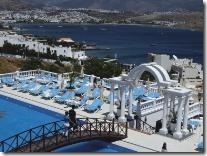 That is the Aegean Sea you can see in the background and our room was actually situated right under the line of pool chairs. There is a steep decline once you have walked through that arch and the rooms are all cut into that decline allowing the rooms some great views.

We had a fabulously relaxing first day of holiday by the pool. We don't really count being passed out in our room as the first day of our holiday! All we did was lounge under the pool umbrellas reading and take the occasional dip in the pool. I've always been a bit of a slow reader but I devoured four books on holiday: Shade's Children

, The Lion, the Witch and the Wardrobe (Chronicles of Narnia)

and Raven's Gate (Power of Five)

. (Yes, those are children's books - all four of them - but I still consider it a reading victory).

We quickly took a trip into Gümbet as we had some time to spare. Gümbet is a lovely little resort town with loads and loads of restaurants and bars. There are also loads of shops with "genuine fake" goods in (if that appeals to you) with fake Prada, Gucci and other designer goods. Had I known that Prada handbags cost over £1,000 then I might have spent €30 on an excellent fake, but how was I to know? I did manage to get quite a nice bikini so that was good.

That evening,we went down to the Turkish bath and spa in the basement of the hotel. If our morning buying experiences were difficult, this was just the opposite. The nice proprietor took us around his baths to explain the treatment in full and how much we would be paying. In short, it was absolutely amazing. Once again, I didn't take any pictures of the baths but there is a picture on Bodrum Resorts:

The room appears to be all marble with the raised section in the middle and sinks all around the edge. There is under floor heating and so the room is almost as a hot as a sauna or steam room. The treatment started with you lying on the raised section and them dousing you alternatively with hot and cold water. Then you are giving a full body exfoliation with an exfoliation glove. They then mix a lavender treatment which is applied to your body with a cloth sack. The effect is that the sack fills with bubbles and the effect on your body is almost effervescent and gives you a feeling of slight buoyancy. The treatment continues with a full body massage and finally you are doused in more much needed cold water.

Well, given the day's activities, by the end of the massage we were absolutely relaxed and glowing from head to toe. We certainly slept well that night!