Well, it is almost two weeks since we got back from our short South African holiday and it already seems a distant memory.  We had a lovely, low-key time and I spent nearly every day sun tanning and we visited friends and family in the evenings. Unfortunately, I inherited my Dad’s English Rose complexion and I don’t even have tan lines to show for my time in the sun!  I took loads and loads of photos in SA but had to delete most of them at the wedding – my camera ran out of memory at the moment the bride arrived!!!  So this is a bit of a compacted version of our week.

We arrived in OR Tambo International airport after a pleasant Air France flight in which I managed a whopping 5 hours of sleep.  I was very pleased with that.  The hosts on the flight were predominantly male and good looking, which I was quite satisfied with and the food was really good!  We left from London City Airport which is totally convenient to get to from our house (only 25 minutes) and I just caught the DLR straight from work.  The only downside was that we had a very short stopover in CDG in Paris and they made us go through security again and wait in lines!

We arrived in South Africa to unseasonably warm 25°c weather which is about 80°c.  I was silly enough to fall asleep that afternoon and only woke up at 11pm that night!!  I couldn’t get back to sleep and so managed to get jet lag even though there is only a 1 – 2 hour time difference (depending on daylight savings).

On Sunday, we had the most awesome day as all of our friends and family came over for a braai (pronounced like rye with a ‘b’).  This is a barbeque but differs from the UK and Australian versions because we heat up the wood and charcoal fire until it is white hot and then we cook as it cools down.  I was so happy to be seeing my friends and family that I didn’t take any photos at all.  I wish I had but then again, it was such an awesome day that I don’t mind. 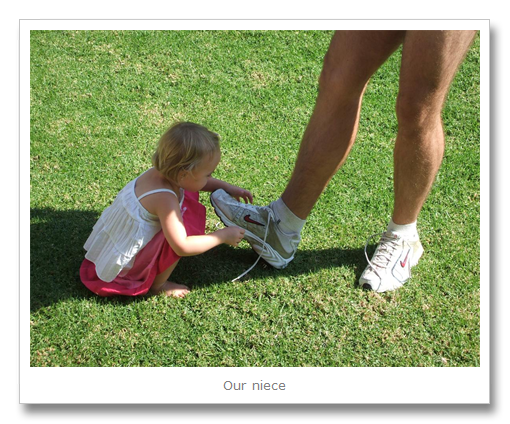 The best thing about the day was that we asked everyone to bring there babies so I got to see my 13-year-old godchild Kayla as well as many babies we hadn’t even met yet!  I last saw our niece when she was only 5 months old.

Being the complete girl that I am, the first thing I did was head off to the salon for some of the treatments I can’t afford or find in London.  We also went shoe shopping and had a full English breakfast at Wimpy.  Wimpy in SA used to serve really good breakfasts but we were disappointed with this breakfast and we were scandalised that it cost R170 for three of us!!  That is only approximately £4 per person but still – it was expensive for South Africa.

Monday night I went to my friend Vanessa and her family for a lovely dinner.  It was great seeing them!

We spent most of Tuesday snoozing and tanning and went for dinner at Stephen’s brother Donald and our sister-in-law Sandra.  Our niece was so cute and it was nice spending time with them. Sandra is pregnant and the baby is due in mid-May.

On Wednesday we went to the World Wear Centre which is a “lifestyle fashion centre” near our old house in the northern suburbs of Johannesburg.  It took me so long to get used to fashions in the UK but when I went back, I found that I no longer liked SA clothing styles!  I had intended to buy my summer wardrobe in SA but apart from not liking the clothes, all of the shops were starting to stock winter clothes and so I bought nothing!  I did come home with 5 pairs of sandals and a pair of sunglasses though!  Clothes and shoes are a fraction of the price over there. 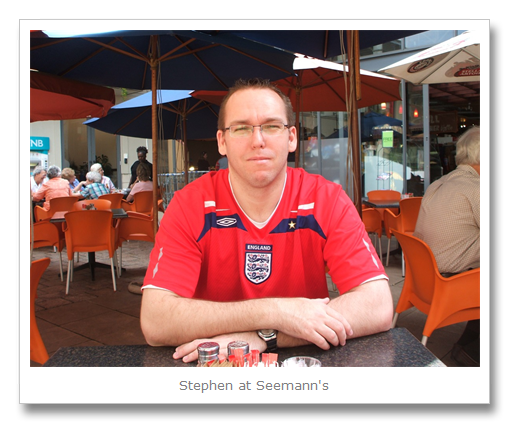 We went to Seemann's for breakfast and had a full German breakfast for R30 each which is more like it! That is about £2 each for a massive breakfast! 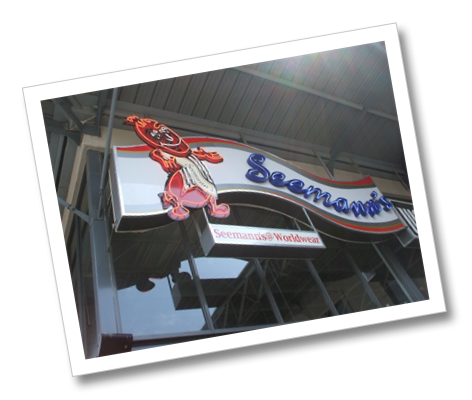 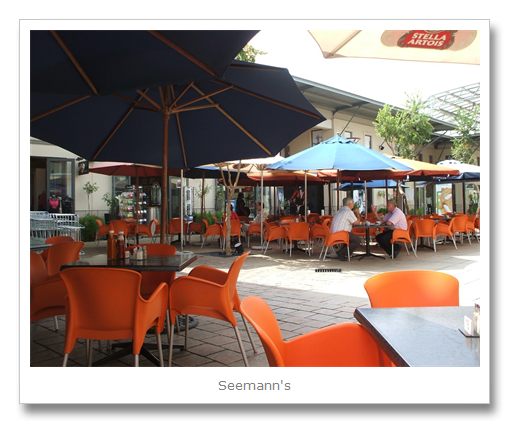 This is typical of restaurants in Johannesburg.  They are often spread out over large areas in the open air, with umbrellas to keep out give shade from the sun and large gas heaters for the winter.  South Africans love sitting outside and do so all year round.  During the day in the winter the sun bakes down and the temperatures rise to an average of 15°c or 60°f but it can get quite chilly at night but you will still find brave people outside sitting by those huge gas heaters. 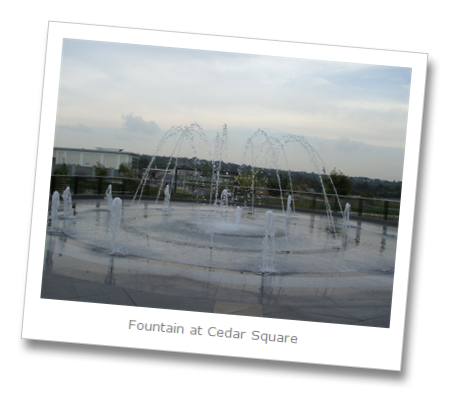 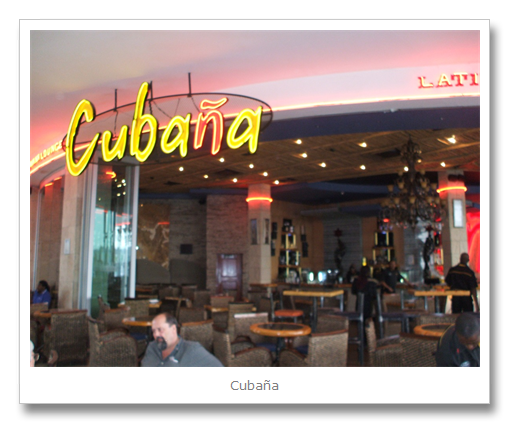 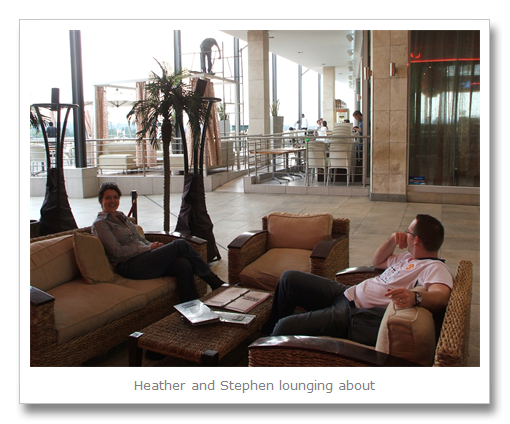 The food and drinks were awesome at Cubaña but the prices were mindblowing! Still, compared to UK prices, the avergae tourist is still going to find the prices a lot less and the portions a lot bigger than the UK. Thank goodness I was budgeting in pounds! 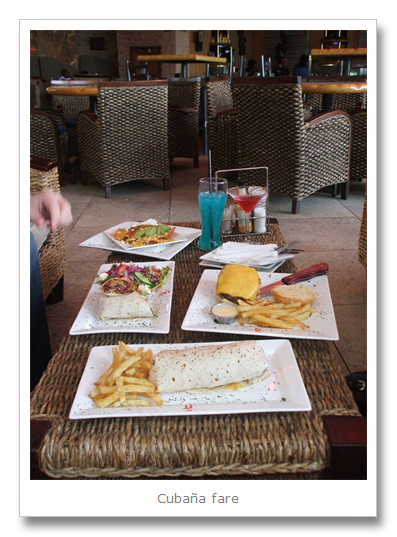 The shopping centre was really lovely and Sara and Donovan were really interested in the design as that is the type of thing they used to design as architectural technicians in South Africa.  Here is an article on the design.  Sara used to work for Bentel in fact. 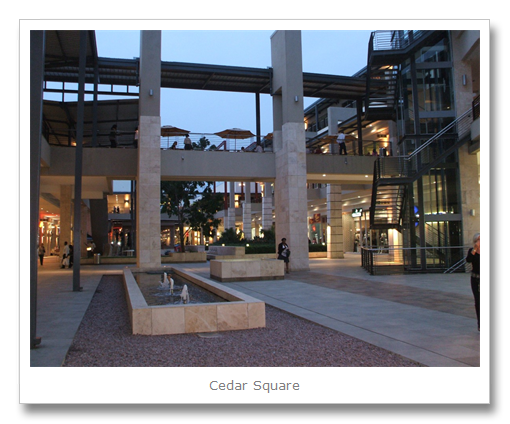 After sleeping extremely well on Wednesday night, we relaxed and tanned most of Thursday.  That evening we visited our friends Steven and Kim who bought our house from us when we left SA.  I thought it rude to snap off too many photos but I manage one of the pool area.  I used their gorgeous, friendly puppy dog as an excuse! 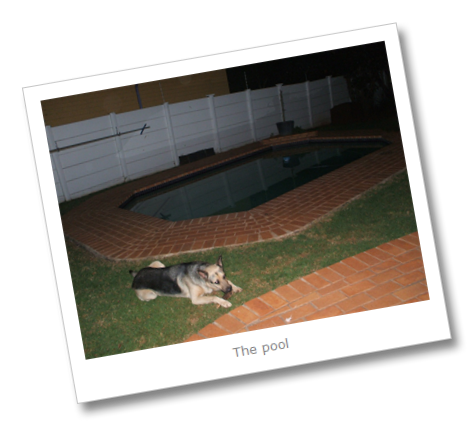 We went out to the Eat Bistro in Northcliff which is one of the best restaurants in Jo’burg in my not-so-humble opinion.  I have no idea why they don’t have their own website because they seriously rock. 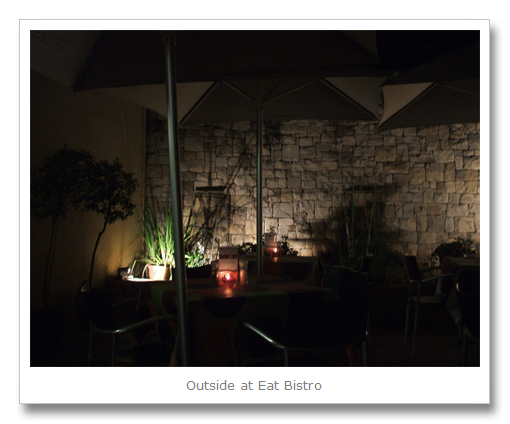 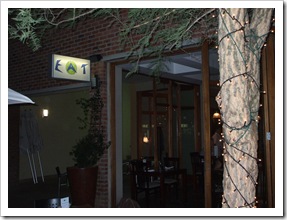 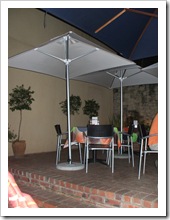 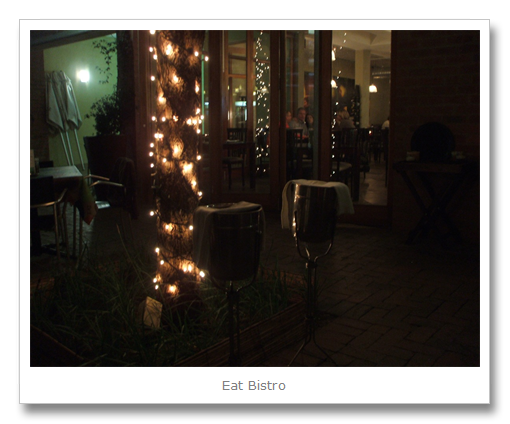 I had calamari with rice in lemon butter sauce.  I have to admit that the highlight of the meal was the rice!  English rice tastes so yucky to us that today, I finally gave in and spent £5 on 1kg of Tastic rice at the South African shop at London Bridge station!! (Yes, we were ripped off and yes, it was worth it).

Well, that bought the first week of our South African venture to a close!  The next couple of days saw a cuteness overload, another plane journey and a beach wedding.