Event: War of the Worlds

I’m going to take a wee break from chronicling my trip to New York to post about The War of the Worlds.  I went to see the 30th anniversary live show of Jeff Wayne’s Musical Version of The War of the Worlds on 20 June, the night before I flew to New York.  Of course, a more diligent blogger would have come right home and blogged about it that night but I trust you won’t judge me too harshly!

In case you’re wondering what I’m going on about, I’ll give you a brief recap.  In 1898, the infinitely talented H. G. Wells wrote The War of the Worlds.  In 1938, a radio dramatisation of the story led to a mild panic amongst listeners owing to its format of simulated news broadcasts.  I doubt many people truly believed the Martians had landed but in the months before World War II, reports of poisonous gasses and invasion would have been frightening if heard out of context.  In 1978, Jeff Wayne released a musical concept album based on the book.  The double album was about 90 minutes long and it tells through music and song the story of the Martians landing and their attempt to take over Earth.

It begins exactly as the book does: “No one would have believed in…

I have to apologise. My simple little point-and-click camera might be okay for photographs but it takes shocking videos of limited length.  If you did listen to the clip above, you may have recognised the opening chords.  This version is actually quite famous. 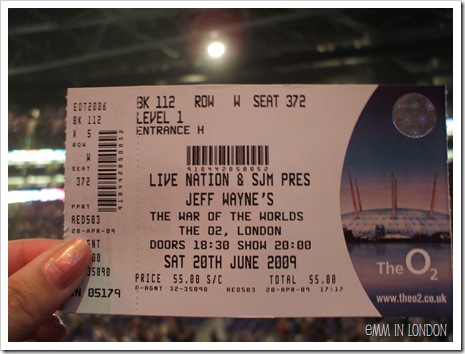 For me personally, this was a very exciting event.  I’ve been a fan of this version for so many years that I know the entire double album off by heart and was absolutely thrilled to have the chance to see it performed live. 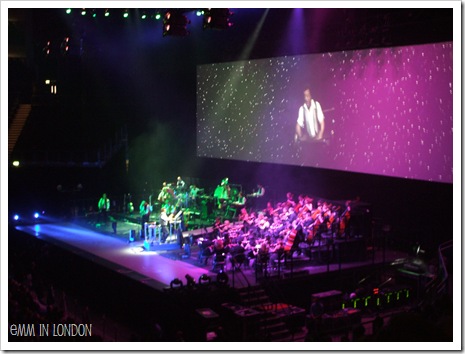 They had a full orchestra and Jeff Wayne himself conducted.  He received such a loud applause when he walked out onto the stage.  You can just see him there on the screen above. 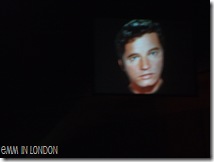 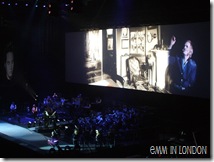 The story is narrated by The Journalist and was originally performed by Richard Burton on the 1978 album.  His image was computer generated during the performance and his original narration used.  Justin Hayward performed the parts of The Journalist that were sung.  I almost fainted when I saw him there on stage (luckily I was seated).  This wonderful man was the lead singer of the Moody Blues and his voice is still really good.  There were actors playing the roles of The Artillery Man, Parson Nathaniel, The Parson’s Wife Beth, Carrie and the Voice of Humanity too. 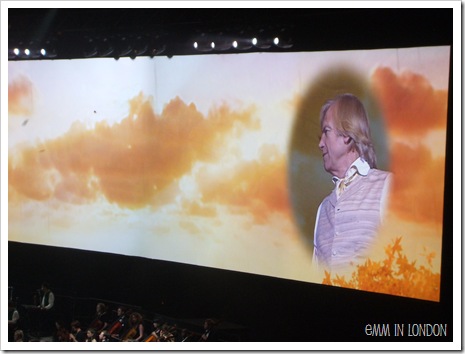 Look! Justin Hayward!  Sorry, I was a bit too far away to get decent photos of the cast. 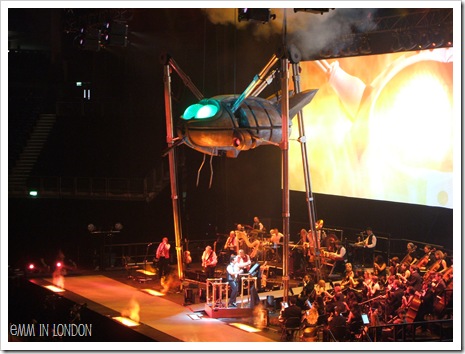 It’s probably worth mentioning that I refused to watch Tom Cruise’s film on principal.  I’m just not a fan of Tom Cruise, his Mickey Mouse voice, the fact that he broke Nicole Kidman’s heart or the fact that they took my beloved War of the Worlds and set it in the modern day.  So this was the first time I’ve seen a proper model of the Martian fighting machine and it was awesome!

I took my brother along with me because Stephen had no idea what it was all about.  We had a fantastic night and I loved the performance so much that I’d certainly consider going again. If I have a spare £50 lying around and they come to the UK.

In the meantime, I’m going to Mika on Friday (Ste likes him and I won tickets) and both Pixies and Shpongle in October.  It’ll be the second time I see both those bands.