Sunday, 21 June 2009: the day of the summer solstice which means it is the day with the most hours of daylight in the northern hemisphere.  Of course, that still equates to 16 hours of daylight or so but 21 June was indeed the longest day ever for me because I flew to New York that day and experienced daylight for a whopping 20 or so hours. 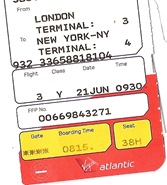 I landed at JFK airport in New York at about noon.  I was really surprised as it took a whole hour to clear passport control which is officially the longest time I have ever had to wait in an immigration queue.  Granted, I travel on both a South African and British passport usually (as is required by the South African government if I wish to retain dual nationality) and so I am not used to immigration queues at all.  Despite the long wait, the man that served me was very welcoming and friendly and it gave me my first taste of the wonderful spirit of the people of New York.

Passing through baggage control was quite funny.  I had packed 8 t-shirts, two pairs of shorts and a pair of pyjamas into my rucksack which we had then shrink-wrapped.   It looked really small and weighed in at 9kg but I needed to pack only that which I could easily carry myself and at that stage, I did not know whether I would be travelling to Boston and DC.  At the final customs check, the attendant looked at my bag and asked in an amazed voice how long I was staying.   I explained my story to him and he let me through with a rather surprised look on his face.

Lesson number one for travel to the US: I don’t care how you arrange it but ensure you have a roll of quarters handy when you land in the US.  I needed to phone Stephen to let him know I had landed and my hosts to tell them I was on my way and phones do not take notes in the US!  The problem is that although $1 coins are in circulation, if you get clever, say, and buy a chocolate bar for the change, you are likely to get a hand full of $1 notes in change.  Seriously, take my word for it, get a roll of quarters.  You won’t regret it.  We’ll come back to this later.

I caught the AirTrain which goes straight from Terminal 4 (where I landed) to Howard Beach Station which gets you on to the New York subway system (the A train).  The AirTrain is really well signposted plus there are public service announcements so there is no need to fall victim to the unscrupulous scam taxi drivers that they warn you about. 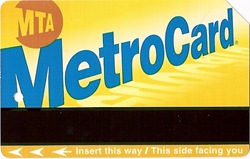 The AirTrain is free if you wish to transfer between terminals but it costs $5 to transfer on to the subway system.  You can buy a reusable MetroCard at the station for $7 which will give you $8.05 worth of credit on.  If you are in New York for a week though, I would highly recommend getting an unlimited $27 week pass.  That doesn’t include the AirTrain but despite the amount of walking I did in the week, I still used over $27 worth of subway and bus fares.  Fares are $2.25 each now, as they went up the day I left.  For $2.25 for a transfer from Howard Beach Station to the apartment on the other side of Manhattan (upper west side), New York City transport completely trumps London transport in terms of affordability.

When it came to accommodation, I was really lucky in that I was chatting to Sue, an old friend and work colleague from South Africa and she put me in touch with her sister Alex who lives in New York now.  Alex heard that I was considering staying in a youth hostel and immediately offered me a place at her apartment rather.  Unfortunately, Alex and her family were away much of the week, so we didn’t get to spend much time together.

Anyway, the subway system in New York is incredibly easy to navigate.  I found it quite easy to follow Alex’s instructions and arrived at her place on West 113th Street at about 4pm.  (Yup, it took about 4 hours with passport control, trying to find change for the phone and accidentally getting off the subway at the wrong station).  Alex took me on a tour of the neighbourhood (which is right near to Columbia University), fed me sushi and then it was bedtime for her four-year-old son and I.

The longest day ever but I was in New York, finally!