Where I Work: Autumn arrives

If I had to pick out my absolute worst habit, I would have to say that it is neglecting to take lunch breaks.  I get into work around 9am and work straight through until 5pm before running off to catch the train.  I’m terrible!  The last time I took a lunch break was in August and before that I think it was May when I had lunch at Joes!

One of the biggest differences between England and South Africa is that we have four seasons here.  In Johannesburg, we had 9 months of scorching hot summer and 12 long weeks of ice cold nights and dry, hot days (that is winter!)  All Jo’burgers complain bitterly about the winter and we take for granted the fact that there are more dry, warm, sunny days then the whole of the English summer!

So, combining my rare lunch break and noticing the seasonal changes, I thought I’d post some of the photos I’ve taken on my Nokia N70 over the past 6 months.  All of these photos are taken in the recently renamed St George’s Churchyard Gardens in SE1.  You can read a bit more about the history of the gardens here. 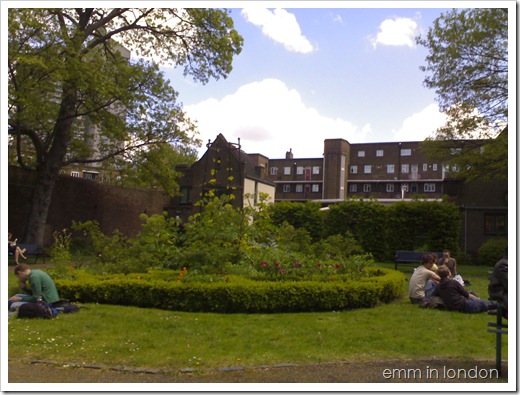 This was taken on the 1st of May this year.  Spring was in full bloom and all the beautiful shades of green were starting to emerge.  I love that heady, balmy early summer feeling in England.  We didn’t get that in Jo’burg – it was freezing one day and then summer arrived the next. 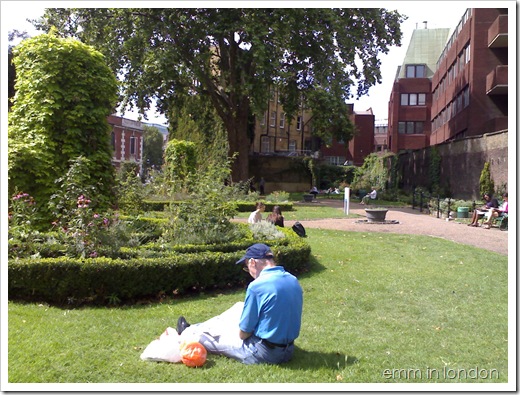 This was my third straight summer in England and in my opinion, it has been the warmest, nicest summer so far.  The first summer in 2007 was alternatively freezing and boiling (as in freezing all the time except when I was on crowded trains) and last year was pretty miserable.

This photo was taken on the 18th of August.  I’d managed to tear myself away from the office and made it about twenty minutes before running back inside!  (I’m shaking my head ruefully right now).

My building is the ivy covered building in the background.  A year after I first posted about the gardens, we are still waiting for Southwark Council to cut back the ivy!!! 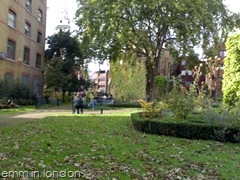 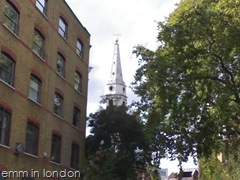 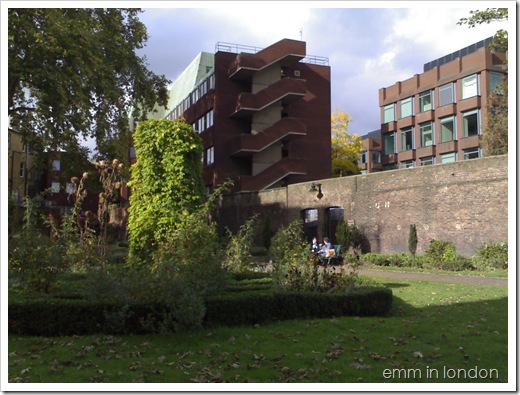 Taken today.  The leaves are turning orange, red and brown and falling to the ground and autumn is definitely here!  Despite the fact that it is nearly the end of October, I was sitting there today with a sleeveless shirt and a lightweight mac on!

I managed to sit for a whole half an hour in the gardens today.  I’m reading a really good book (Marked) and I simply had to read as much as I could!

It has been a long and glorious summer and hopefully I’ll have enough sunny memories to last me through the winter.  I got really bad winter blues the past two years (last year it was exacerbated by having flu for two months) so I am coming out fighting this year!!  Every time I feel blue I can look back on these pictures and start planning my trip to Europe next summer.

We were planning a road trip around Italy but now I am toying with driving from Dartford (in England), taking a ferry to France and then driving to Portugal.  Sheila from A Postcard a Day posted some gorgeous postcards from Portugal lately and I follow an awesome Portuguese photo blog Photo PT.  Going to Italy is still one of my biggest dreams but going to Portugal next year might just work better.  And the biggest reason for going to Portugal?  I could get to meet one of my best blogging friends Blue Kermit.