I usually book concert tickets months and months in advance and spend just about forever looking forward to them.  To illustrate, this week I booked tickets to Muse on September 11th next year but I’ve resolved to only start counting down the sleeps after New Year.

So imagine my surprise when I visited my favourite band’s MySpace on Thursday and realised they were having a concert last night! It was all very exciting and I booked tickets immediately.

My favourite band is called Cranes and I’ve been a huge fan since 1993.  Naturally, I have all of their albums including the rare and obscure ones.  This is the third time I’ve gone to one of their concerts – the first time was in June 2004 and the last one was in October 2008 when they released their latest album.  (Click for reviews of the Cranes concert in 2008 and the review of their latest self-titled album Cranes).

The concert was at the Luminaire in Kilburn which is an okay venue but they obviously haven’t heard of the credit crunch or current financial crisis.  The cost of one lager shandy (only half a pint of lager in that plus lemonade!) and a Red Bull was £6!!  There was nowhere to sit in the venue and huge pillars everywhere blocking the view of the stage so I can definitely say that the venue didn’t warrant the prices of the drinks.  Or I should say drink – we decided not to buy more after the first round. 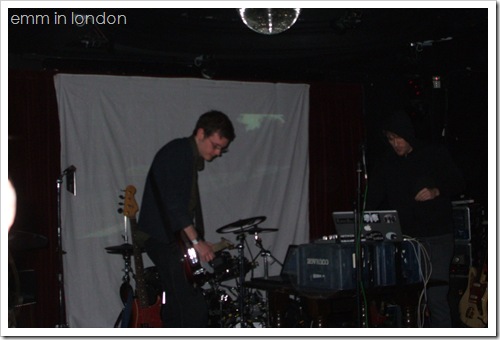 Please excuse my terrible photos!  I’m often able to get great results with my little point-and-shoot camera but last night was not one of those occasions!  In fact, the only usable photos of Cranes were taken by Stephen!!!  :(  Unfortunately, I was afflicted by terrible photography at last year’s concert too!

The support group was called worriedaboutsatan, a wonderful minimalist electronic duo from Leeds.  I really enjoyed their show and bought two of their CDs.  Their show was interesting as they had a full backing film to go along with the music.  They were good! 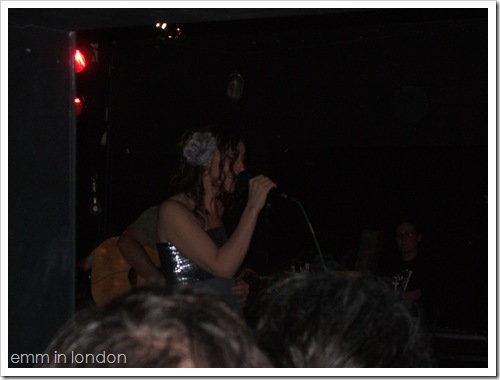 Cranes’ sound can best be described as belonging to the shoegazing or dream pop genres.  The lead singer Alison Shaw has a dreamy, girl-like voice and their music is moving and melancholic.  I really love their music. 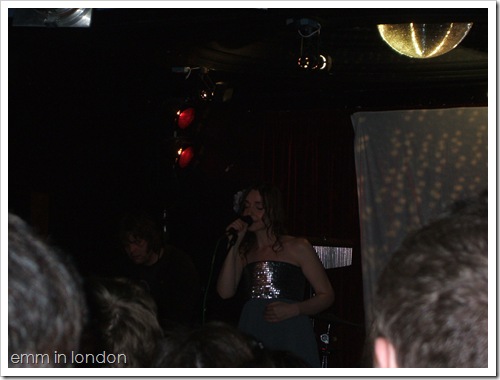 Unfortunately, I didn’t enjoy this concert as much as I enjoyed the others.  They had a couple of problems with the sound at their last concert which seemed to happen again at this concert.  The mic, bass and guitars seemed too loud and the sound just wasn’t harmonious.  There was also something wrong with the amplifier or something, as there were a couple of grinding, screeching noises towards the end of the concert.  The set list was also disappointing.  They played most of their sedate, quiet songs which is fine if it is a seated concert but not nice for a whole evening if it is a standing concert.

So in the end, it was a little disappointing which I guess is also okay.  You can’t always go to absolutely brilliant concerts!  Which reminds me, I still need to post about the Pixies and Shpongle concerts in October!