Beaumaris Castle on the Isle of Anglesey

Once upon a time, there was an ambitious young prince called Edward. Edward lived in the most exciting and turbulent of times during 13th Century Britain. By the time he turned 30, Edward had fought, been captured and released during the civil war against Simon de Montfort’s Barons and he had taken part in the Eighth and Ninth Crusades to the Holy Land. Edward was just 33 when he became King Edward I of England on 16 November 1272.  After a nine-month leisurely tour of Italy and France, Edward I returned home to England and set about restoring some of the law, order and land that his father, King Henry III, had lost.

At first, that involved imposing English law on Welsh subjects and crushing rebellions, but over time, Edward I embarked on a plan of massive English settlement in Wales.  His castles are testament to that ambition and in total, he built eight castles in Wales.  Four of these castles were proclaimed a World Heritage Site in 1986 (Beaumaris, Caernarfon, Conwy and Harlech)and we were lucky enough to see Beaumaris, Caernarfon and Harlech castles on our visit. 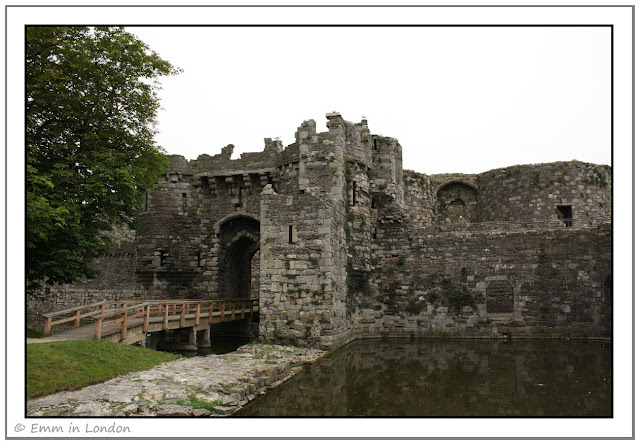 The Gate Next to the Sea, Beaumaris Castle

Edward’s castles added two important features to British castles.  First, there is the arrow slits in the walls, an Eastern influence that was discovered during the Crusades.  The second was the building of concentric castles where the outer defences completely surround the inner ward.  If you click on the photo above to enlarge it, you can see the lower outer wall and the south gatehouse leading to the inner ward. 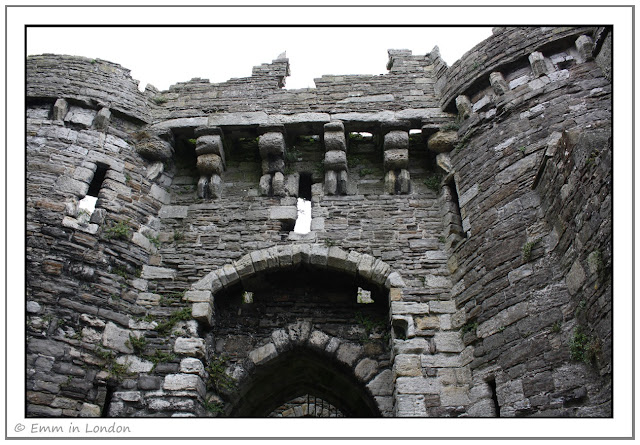 Entrance to Beaumaris Castle, the Gate Next to the Sea

Beaumaris Castle was Edward’s final castle in Wales but it was never finished.  Incredibly, much of what we can still see today was built in one year (1294-1295) except for the curtain walls which were completed in the 1330s. 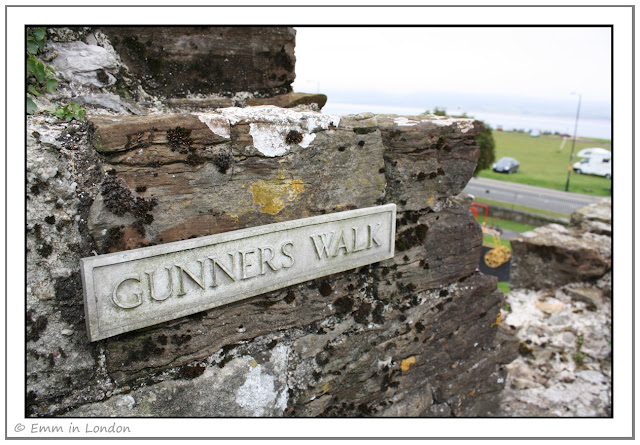 Once we had entered the castle though the Gate Next to the Sea, we climbed up the stairs to the outer curtain wall and walked along Gunners Walk.  That is mainland Wales you can see in the distance of the photo above.

It was a cool, cloudy day but not as cold as it looks, thankfully. 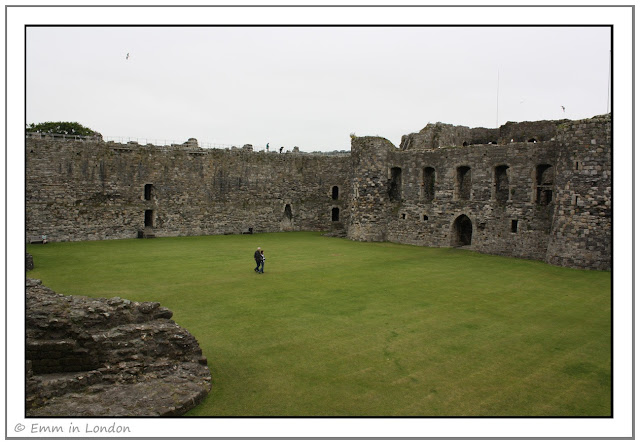 The Inner Ward looking towards the North Gatehouse

The inner ward of Beaumaris Castle might look bare today, but in medieval times it would have been full of little buildings housing the kitchens, stables, banqueting halls and, of course, the living quarters of those lucky enough to reside within the castle walls. 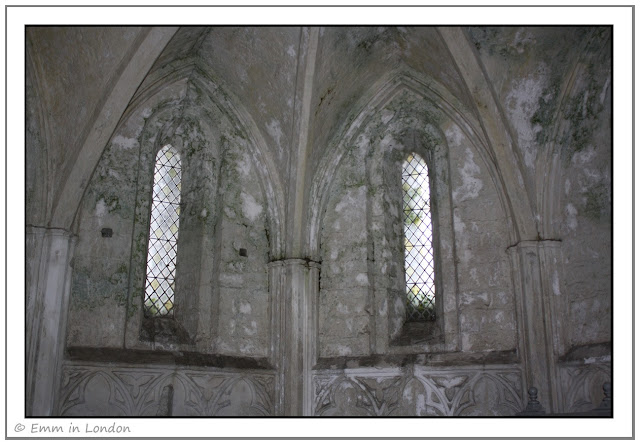 The chapel at Beaumaris Castle is haunted. Of course, I have no evidence of this bar my own experiences but a simple Google search told me that I am not the only person to have a strange experience in the chapel.

At first, a dark shadow kept appearing in my photos and I was silly enough to delete them but then we saw the shadow on the LCD display of my step-mother’s camera and got quite a fright! Anyway, we have no proof but that chapel is haunted. 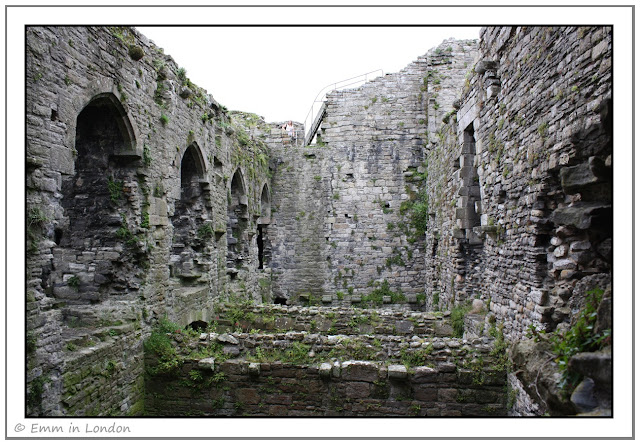 For a reason that I cannot quite fathom, views such as the ones above and below really impress me.  Perhaps it is the proximity of the walls but I just felt that I really got a glimpse into how the castle might have looked 700 years ago. 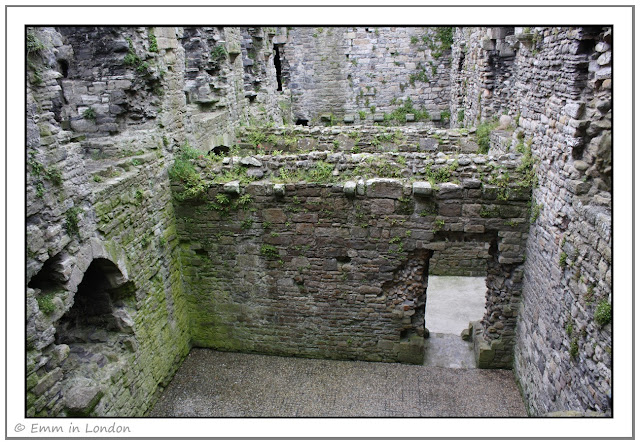 I love how grand and imposing castles are with their stones, archways, walkways and arrow slits.  I love how decorative the stone can look and how majestic they remain. 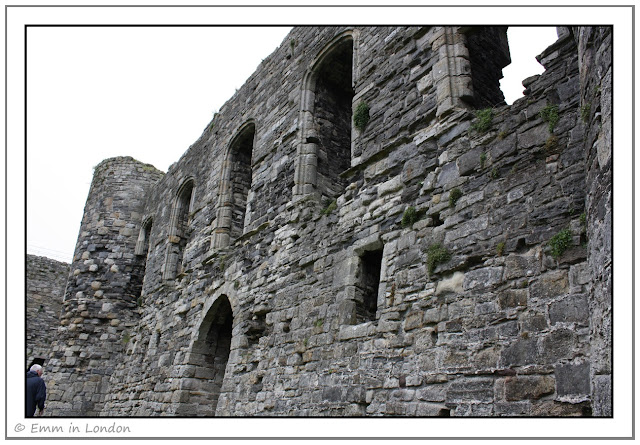 Detail of the north gatehouse

That is my dad you can see in the bottom left of the photo. It gives an idea of how imposing these castle walls are.  They weren’t even that tall 700 years ago but perhaps they needed the height for the standards or spears. 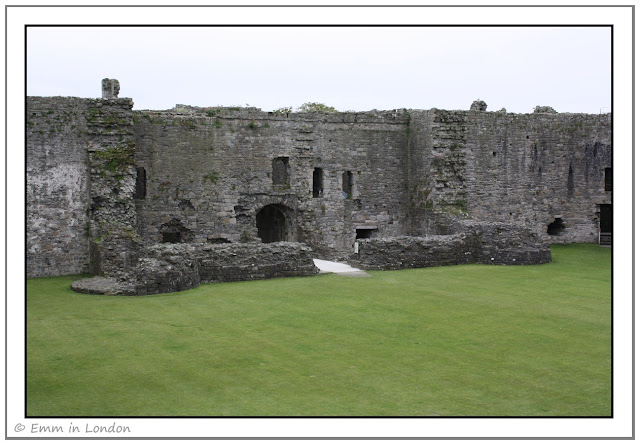 View of the south gatehouse

The south gatehouse was never finished (its three portcullises were never installed) and there is a barbican located between the south gatehouse and the Gate by the Sea to make it harder for attackers to gain access to the inner ward. 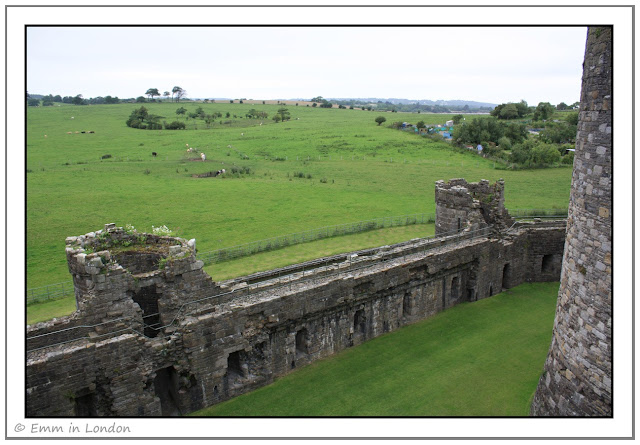 Beaumaris was once surrounded by its moat but these days it only runs about a third of the way around the castle.

The views from Beaumaris were quite beautiful and this young seagull was very kind to pose for me. 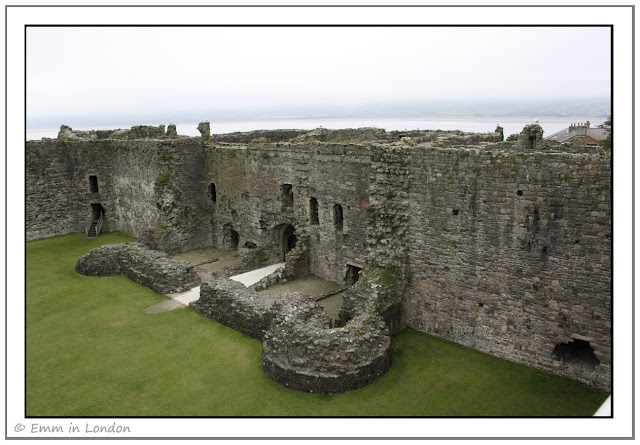 The view of the inner ward from the curtain walls was quite exquisite and you could get an idea of the overall design and function of the castle. Unfortunately, the chilly weather began to take its toll and we started to head downstairs for some lunch. 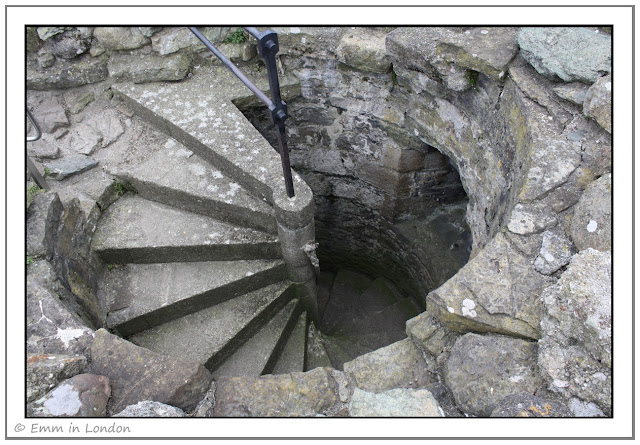 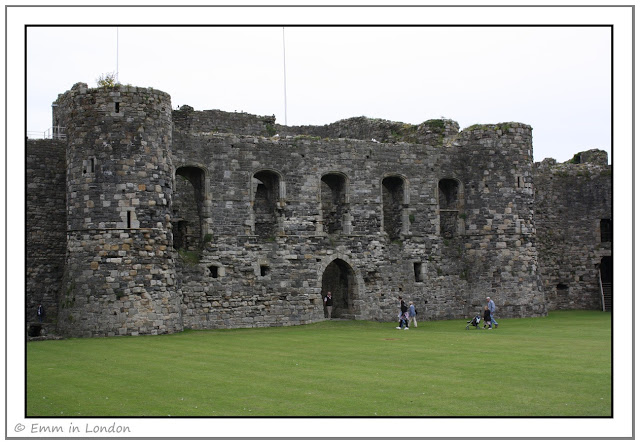 View of the north gatehouse

The north gatehouse was one of the most completed parts of the castle and you can get an idea of how tall the castle was intended to be.  It is possible that there was a great hall behind the five windows.

Beaumaris Castle is certainly one of the nicest castles I have visited.  I would love to visit there one day when the sun is shining the cloudy weather did add to the sense of history and importance. I’d certainly recommend a visit.