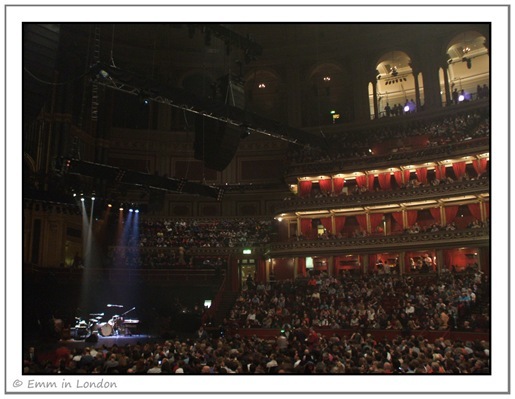 Last night we made our way to the Royal Albert Hall to see PJ Harvey in concert.  I have been a fan of Polly Jean Harvey since 24 June 1995.  I remember the exact date because my friend Sarah and I went to Glastonbury together that year.  I didn’t know PJ Harvey’s music at all but had compromised with Sarah as she really wanted to see her.  I thought that my misgivings were realised when Polly burst on to the stage in a neon pink cat suit but let’s just say that I was absolutely blown away by her performance.  To this day, I remember the moves she made and the props she used with each and every single song she played that day.  Quite incredible, considering I didn’t know any of her songs before that day!

I left Glastonbury that year and bought all of PJ Harvey’s CDs and I have bought every album since then.  When I heard that she was performing at the Royal Albert Hall, I made sure that I got a ticket! 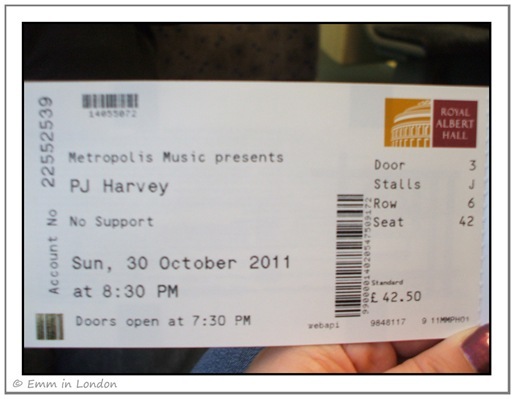 This is the second concert I’ve seen at the Royal Albert Hall, the first being the Editors concert back in March 2011.  I have to say, with the incredible acoustics and sound in the Royal Albert Hall, I don’t think I will ever be able to go back to a normal concert venue after this. The Royal Albert Hall is the premium concert venue, the type of place that real music lovers go to appreciate good music.  All of the tickets were sold as seated (although there did appear to be a standing gallery on the very top level) and the atmosphere was one of reverence and circumstance. 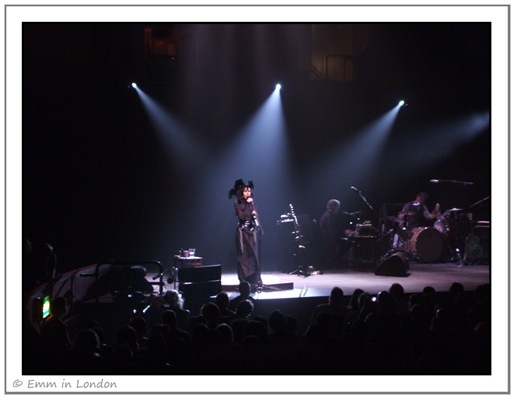 PJ Harvey arrived on stage shortly after 8.35pm.  She started off the evening with “Let England Shake” and “The Words That Maketh Murder”, both off her latest album, the Mercury Prize-winning Let England Shake. 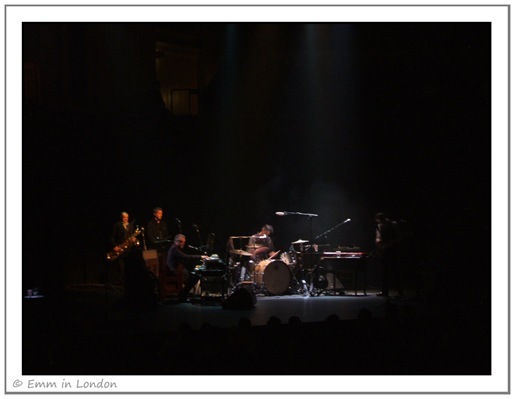 Next up was “All and Everyone”, also from Let England Shake.  This song was incredible and I felt goose bumps over my entire body hearing it.  It reminded me of just how much of an impact that concert in 1995 had on me because I wasn’t a fan of Let England Shake until last night and now my mind has been absolutely changed. 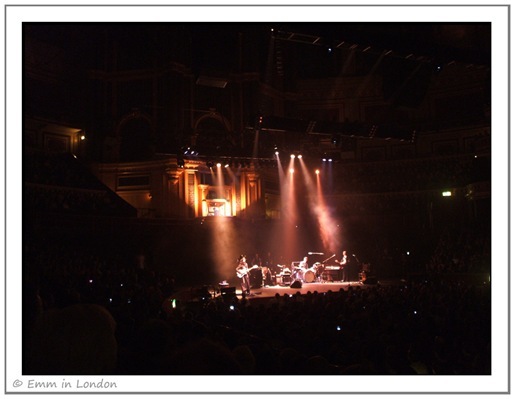 The next couple of songs were also from Let England Shake (see the setlist below) with the exception of “The Devil” and “Dear Darkness” from White Chalk.  I was absolutely thrilled when they began to play “The Last Living Rose” as the Grand Organ suddenly lit up and Mick Harvey could be seen playing it.  It was incredible! 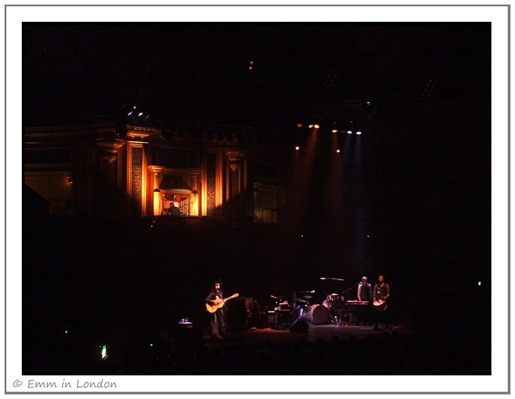 In the photo above, you can just make out Mick Harvey on the organ, with John Parish on keyboard and Jean-Marc Butty on the military drum.  Oh, and just in case you are wondering, that is the Mick Harvey of The Birthday Party and Nick Cave and the Bad Seeds fame.  I will admit to a definite fan girl moment when I learned that it was him! 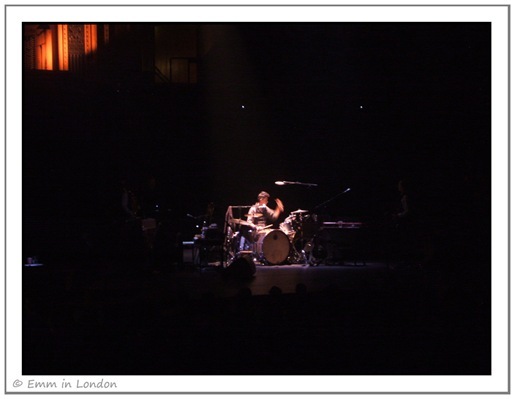 Jean-Marc Butty actually made quite an impression throughout the show and it goes to show how good the sound is in this venue.  I especially enjoyed his drumming in “Pocket Knife” from the 2004 album Uh Huh Her.  He was energetic, skilled and absolutely entertaining. 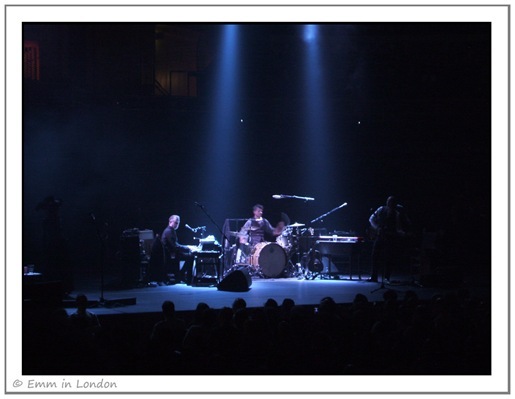 My favourite part of the show (up to the encore) was when Polly launched into “Down By The Water” and “C’mon Billy” from her phenomenal 1995 album To Bring You My Love.  Stephen was most impressed because finally, one hour into the show, he recognised one of the songs!  Poor long-suffering husband of mine.

When Polly finished performing “The Colour of the Earth”, she thanked the audience and made to leave the stage.

It is testament to this fantastic performance that the whole audience shot up onto their feet to give PJ Harvey a standing ovation.  I wish the photos above were clearer but I was clapping too much to be able to take better shots!  Polly and the band looked truly humbled which is crazy because they should have a fair idea how awesome they are.

Now I know it is pretty much a given in any concert that the band will come back for at least one encore but the atmosphere was electric as the entire audience stayed on their feet and clapped for about five minutes before Polly finally returned with a guitar and performed “The Desperate Kingdom of Love”.  This is such a stunning song and I remarked to Stephen that I have never seen someone achieve that with a guitar before, it was just so powerful and stunning.

“White Chalk” was up next, another acoustic track and then the moment I had waited for all night arrived as Polly finally performed “The Sky Lit Up” and “Angelene” from Is This Desire?

She finished off with “Silence” from White Chalk which was a brilliant track to showcase her powerful and impressive vocal range.

This concert was truly special and absolutely worth every penny.  Polly Jean Harvey – you are a legend and I am truly grateful for the privilege to see you not once, but twice in concert.

Setlist:
Let England Shake
The Words That Maketh Murder
All and Everyone
The Big Guns Called Me Back Again
Written on the Forehead
In the Dark Places
The Devil
Dear Darkness
The Glorious Land
The Last Living Rose
England
Pocket Knife
Bitter Branches
On Battleship Hill
Down by the Water
C'mon Billy
The Piano
Big Exit
Hanging in the Wire
The Colour of the Earth
Encore:
The Desperate Kingdom of Love
White Chalk
The Sky Lit Up
Angelene
Silence