Glass and Chrome in Sandton , Johannesburg 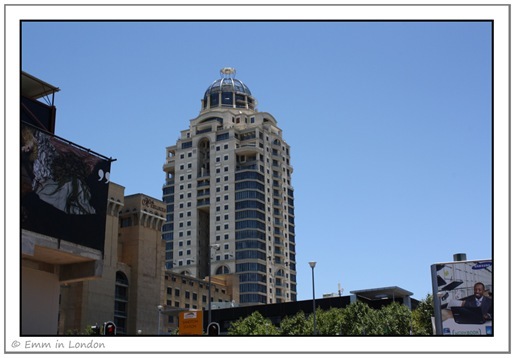 My path to becoming an eternal tourist began in December 2006 when my cousin Michael came to South Africa to visit. Suddenly I had to find out what we could possibly do in Johannesburg for three weeks and I discovered just what an amazing tourist destination South Africa can be.  I began to see the world around me through the eyes of a tourist, as if noticing everything for the first time, and it made sense to continue doing that when I arrived in London in 2007.

Despite my optimism and best intentions, Sandton was not an area that I could grow to love.  Sure, it has great restaurants, shops and cinemas but it's basically soulless. Then again, I worked in Sandton, so that probably coloured my perceptions, and I also had to spend between 2 and 3 hours a day in traffic just to get to and from work.

The area known as Sandton has always been an affluent area and it used to be a series of farms and horsing estates.  Then Sandton City shopping centre was built in the late 70s (it is now one of the biggest shopping centres in Africa) and residences and office blocks began to emerge around it.

Up until the early 90s, the financial centre of Johannesburg lay sprawled amongst the skyscrapers and listed buildings of downtown Johannesburg but crime forced many businesses to take flight and set up in Sandton, Midrand and surrounding areas.  Sandton’s capacity as the new financial district of Johannesburg was cemented when the Johannesburg Stock Exchange moved there in the late 90s.

Now some of the major companies in Africa have their head offices in Sandton, but it is also an area full of trees, shopping precincts, restaurants, hotels and office blocks.  We had some time to kill before Christmas lunch last year and so we took a look at some of the new and not-as-new architecture in the area. 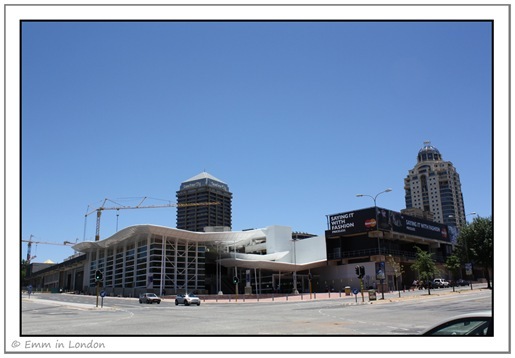 Our journey through Sandton started naturally with a visit to the Gautrain station, which had just recently been competed in June 2010. The Gautrain is the first mass rapid transit railway system in South Africa and it links Pretoria, Sandton and OR Tambo International Airport.  It was meant to alleviate the huge amount of traffic on the roads in the greater Johannesburg and Pretoria areas but anyone with half a brain would have known that the traffic flow comes from the suburbs which are not serviced by the new train system.  The lack of adequate public transport is my second highest reason for not returning to live in Johannesburg, after the crime. 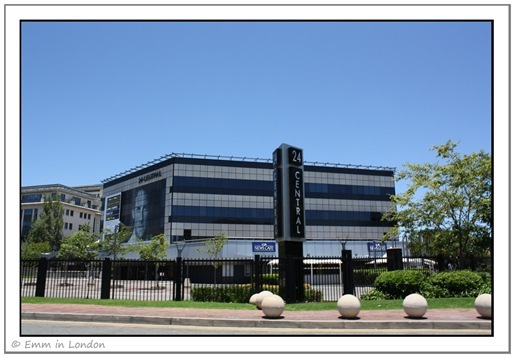 I couldn't resist taking a photo of 24 Central as I worked for the company that redeveloped it from tired old bank premises into a trendy office block with restaurants and shops. Quite a few banks have their headquarters in Sandton although the headquarters of three of the four major South African banks remain in Johannesburg. 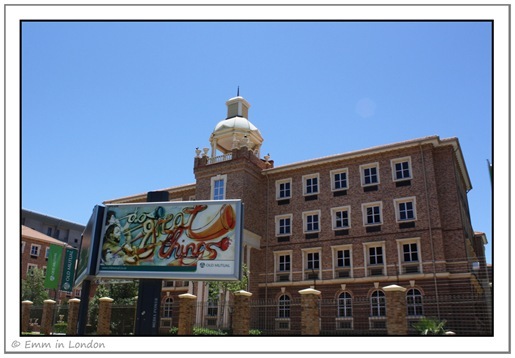 The Old Mutual Headquarters always amused me because they tried so hard to emulate classical architecture and they failed miserably.

One thing you will notice wherever you roam in Sandton is the abundance of greenery and South African flags. 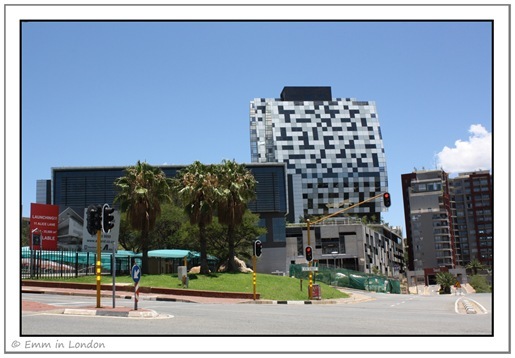 Finally, we made our way to the western edge of the business district to try and see the intriguing new black and white building that we had noticed peeking out above other buildings.  15 Alice Lane Towers is the new home of law firm Deneys Reitz and I was quite impressed with how modern and architecturally interesting it is.

So what do you think?  Do you agree with me that Sandton is pretty charmless or would you be willing to tackle up to three hours of traffic a day, simply to work in this green, sunny, modern business precinct?  This was a post in honour of my “Blue Skies and Sunshine” Sundays but it has had the strange effect of making me grateful for my easy journeys into grey and cloudy London every day.  I treasure my alone time on the train and the chance to sit back, read or play with my phone.

I might miss the sun but my love affair with London is far from over!