One Hundred Words for Green 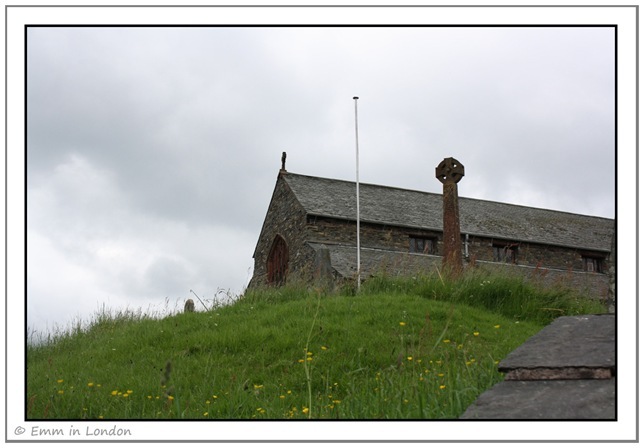 It amazes me that there aren’t a hundred words for “green” in the English language as there are for “snow” in Icelandic.  I wonder whether our ancestors actually opened their eyes as they settled across the British Isles, whether they could see what I see.  But I’m getting ahead of myself.

I mentioned in my last post that I had begun to consider whether Hawkshead had much more to offer when I climbed a set of stairs to the Hawkshead Parish Church.

And then I got to the top of the stairs, turned around and saw this. 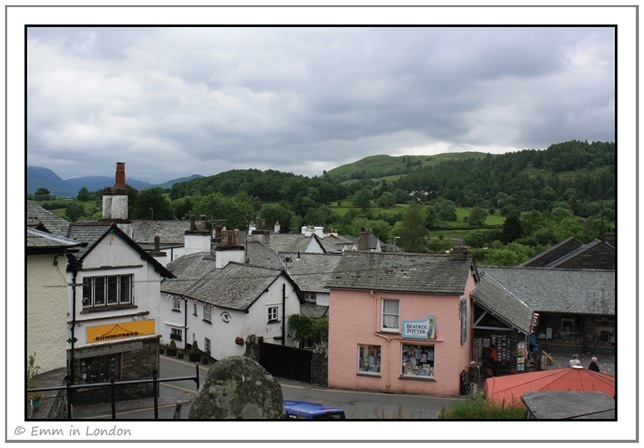 How many shades of green can you count there?  I can count at least twenty.  This country can be absolutely breathtaking and as much as we complain about the rain, it wouldn’t be that pretty if this were a dry season.

You may notice the Beatrix Potter store.  There were stores all over Cumbria as this was where she lived as an adult. 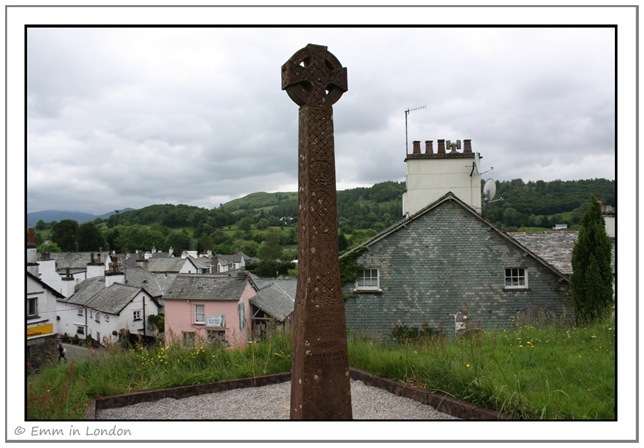 Not only were the views impressive, but I found the churchyard to be quite inspiring too.  The inscription on the war memorial above reads:

Let those who
come after
see to it that
their names be
not forgotten
1939-1945
John R. Clifton
John R. Crossley
Ernest M. Hodgson

I imagine that the inhabitants of this tiny village really felt the loss of those three men. 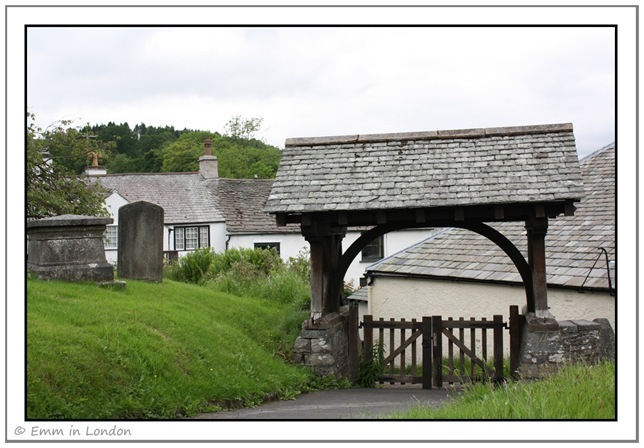 The churchyard even inspired my father who specifically requested that I take the photo above.  Something about the gate intrigued him so. 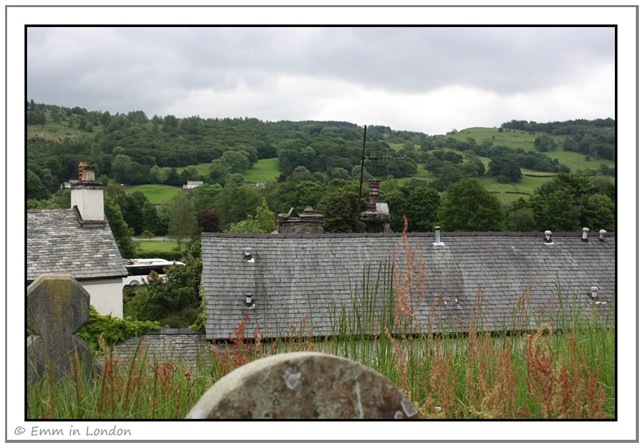 I’d noticed in the past that my photos are often overexposed as I try to adjust for the effects of clouds and bad lighting.  On this day I tried to embrace the clouds and to capture them in all of their dramatic, moody glory.  It certainly helped because I can count another dozen shades of green in the photo above.. 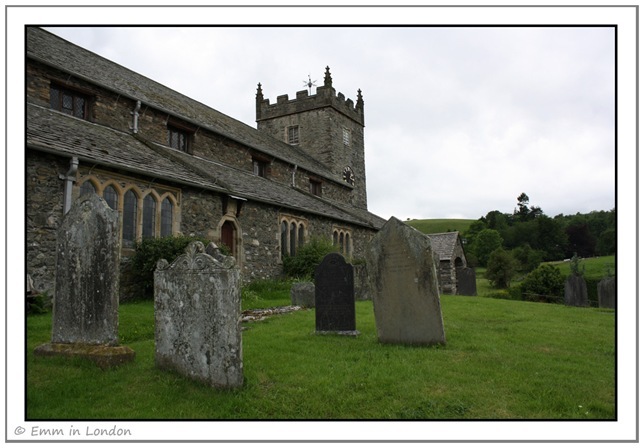 There has been a chapel on this site since the 12th century and following increments to its length and width in the 13th and 15th centuries, there were final adjustments to the roof and windows in 1585.  What you see today is essentially how the church has appeared since the 16th century and that is pretty impressive. 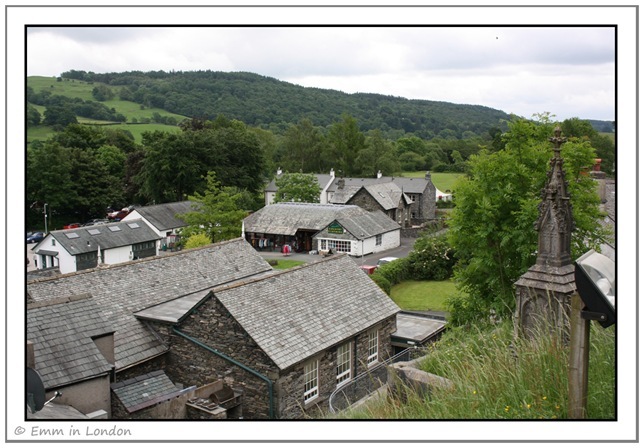 Almost as impressive as this dizzying view of the hills surrounding Hawkshead. 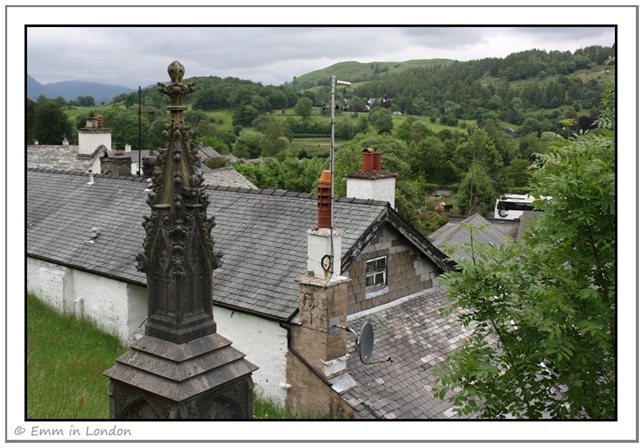 Of course, much as I would have liked to, I could not stay in the churchyard all afternoon.  For just a moment, I put my camera aside and just stood taking in the view below. It is hardly surprising that a language that fails to provide one hundred words for green would prove inadequate in describing such beauty.  Surely I’m not the only one who feels rejuvenated after seeing such scenes? 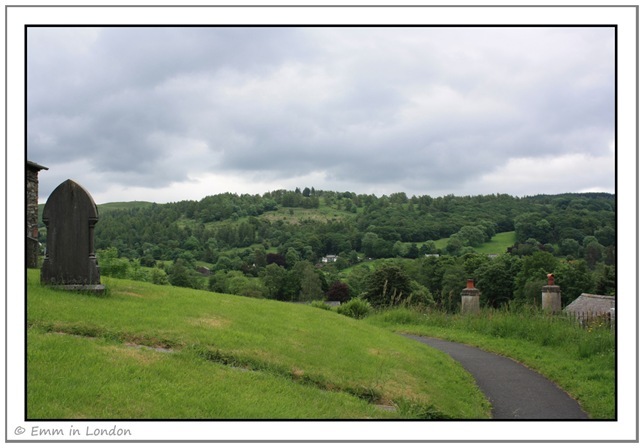 Realising that I was all alone on top of the hill, I slowly made my way back down to the village.  I made sure to appreciate the path down though, doesn’t it look promising? 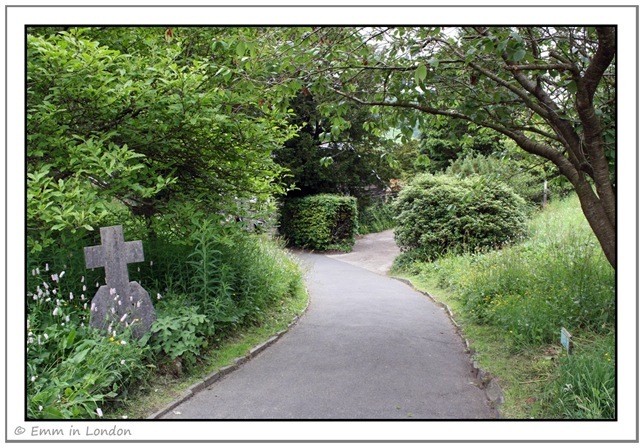