9 Things I Learned on a Bowl of Chalk 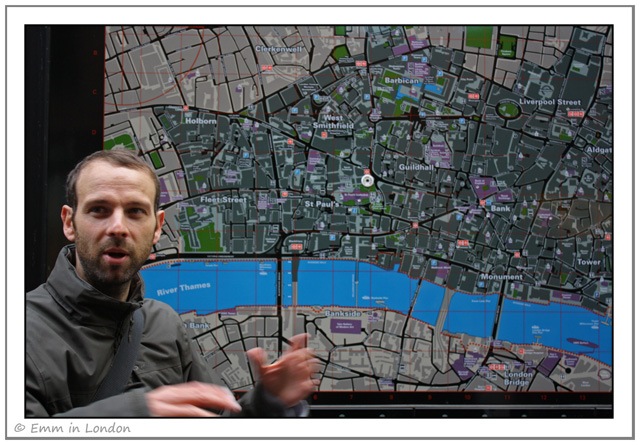 Our excellent tour guide Jonnie from Bowl of Chalk

Not last Saturday but the Saturday before, a couple of us got together and went on a pay-what-you-want walk with Jonnie from Bowl of Chalk.  I'm going to start off by saying that the tour was excellent and Jonnie's knowledge of London, especially the Great Fire of London, was astounding.

We met up just behind St Paul's Cathedral and wound our way round the cathedral and over the Millennium Bridge to the Bankside area. There we explored Borough Market and the high street before crossing the Thames again and landing up at The Monument.

It was not a short walk and took about three hours. I slept very well that evening but my sleep was all the sweeter for the new titbits of information I picked up that day. So without further ado, here are 9 things I learned on a bowl of chalk* in London Town. I was going to list 10 but I think 9 is just as fine.

I’ve walked up and down Cheapside countless times but it never occurred to me to question the rather unusual name of this street located just behind St Paul’s Cathedral.  In medieval English, ‘cheap’ was the word for market and at that time, Westcheap was one of the main produce markets in London.  Many of the roads leading off from it are named after that produce: Bread Street, Milk Street, Poultry (which like Cheapside, is simply known by one word).

You really want to visit Cheapside, because it is where One New Change is located.  This shopping centre has a roof terrace with some incredible views of St Paul’s Cathedral and the changing London skyline. 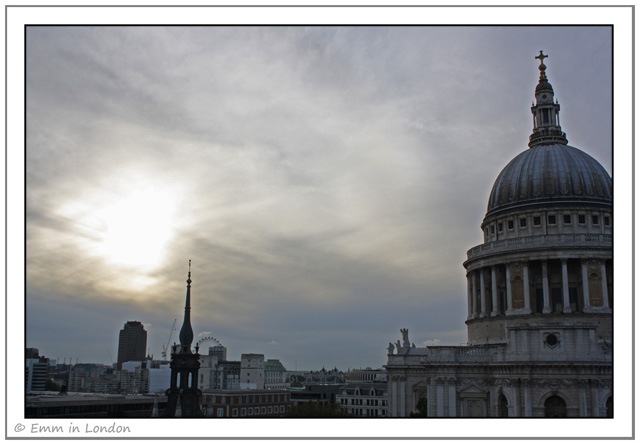 St Paul’s Cathedral and London Skyline from One New Change

I did know there are no roads in City of London but I didn't know this comes from the actual definition of the word road which in this case is a thoroughfare that goes from one point to another with no houses or shops on it.

Since Roman times, The City of London has been one of the most important destinations in the world and as you know, all roads lead to Rome London, so there would be no roads in London because once you’d arrived here, well, you’d arrived at your destination. 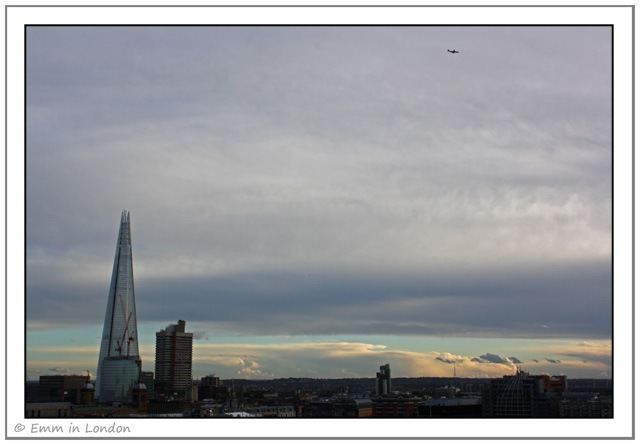 The Shard and London Skyline from One New Change

Being that it was the only bridge linking the City of London to the slums of the south, London Bridge was actually closed at night.  Of course, back then London Bridge was almost a town in itself and there were houses, shops, pubs and all sorts of buildings on the bridge.  For this reason, there were loads of inns down what is now Borough High Street where you could stay the night or await a stage coach.

Just in case you were wondering how gruesome medieval London really was, the severed heads of traitors and executed criminals were impaled on spikes and displayed on top of the southern gatehouse to London Bridge.  This served as a warning to all who entered London of the fate that awaited them should they step out of line. 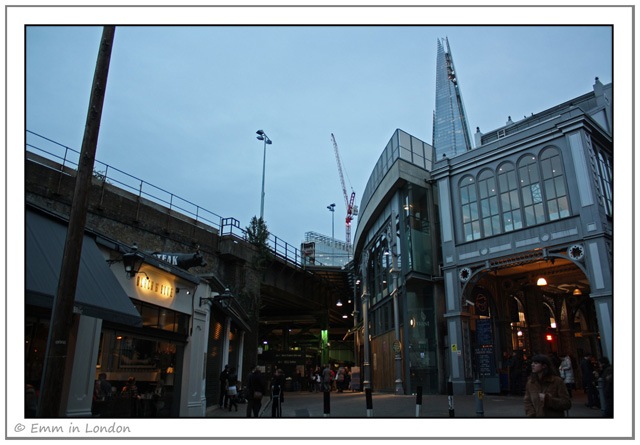 Borough Market and the Shard at Dusk

If you have a vision of a dark and foggy London, you’re not far wrong.  The Great Smog of 1952 was so severe that 4,000 deaths were immediately linked to it.  It was largely attributed to air pollution and resulted in the Clean Air Act of 1956.  Fireplaces and stoves that produce smoke are still banned in the City of London. 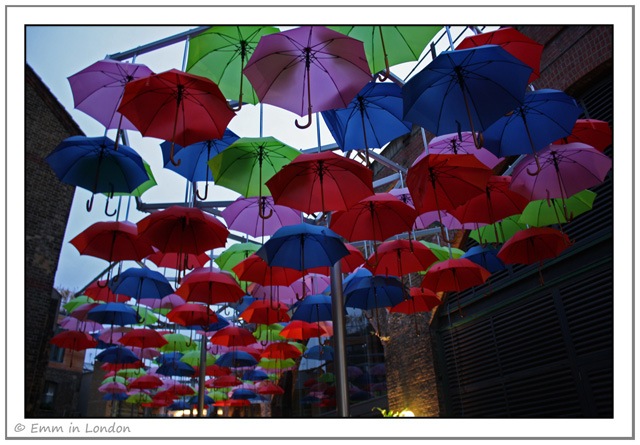 I already knew that the Great Fire of London was started by Thomas Farriner at his bakery in Pudding Lane but I had no idea that ‘pudding’ had a really different meaning back in 1666.  Basically, pudding refers to the lovely stuff that is left over once you take all of the useful bits off a carcass, in other words, it meant offal. I guess I can see the link between that, black pudding and the art of putting leftovers in a crust to make a pie.  Still, it is rather grim.

I also knew that Thomas Farriner was a king’s baker but I learned that this isn’t as fancy a title as I’d imagined.  Essentially, it just meant that he baked for the royal navy. 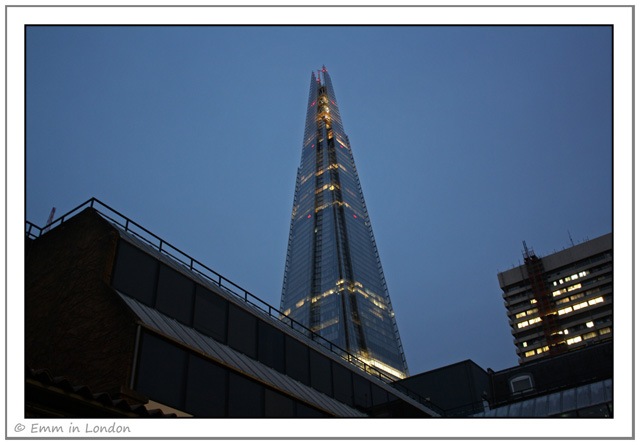 The Shard as seen from The George Inn

I knew that the old St Paul’s Cathedral burned down in the Great Fire of London and that what we see now was built by Sir Christopher Wren.  I didn’t know that Old St Paul’s Cathedral was massive, an imposing compound that dominated the London skyline.  It was so big with its thick stone walls that Londoners thought that it could not possibly fall prey to the fire that was raging through the city in early September 1666.

People began to store all sorts of valuables in the cathedral such as books, works of art and furniture.  Everything was lost.  Not only did the fire reach the cathedral but the scaffolding caught alight, the lead spire melted and centuries of valuable objects were lost. 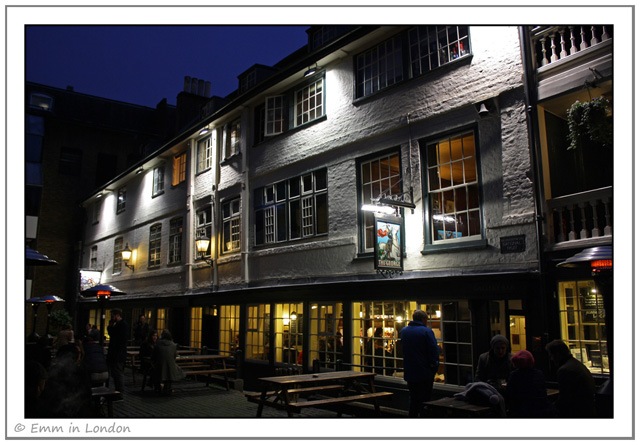 Lord Mayor Thomas Bloodworth is now infamous for being the most useless mayor in the history of the City of London. As Lord Mayor, it fell to him to give permission to demolish adjoining properties which could have prevented the Great Fire from spreading right across London as it did.

He was summoned from his bed and refused to grant the necessary permission, infamously saying that "a woman might piss it out" before going back to bed.

Thanks for that Lord Mayor Bloodworth. 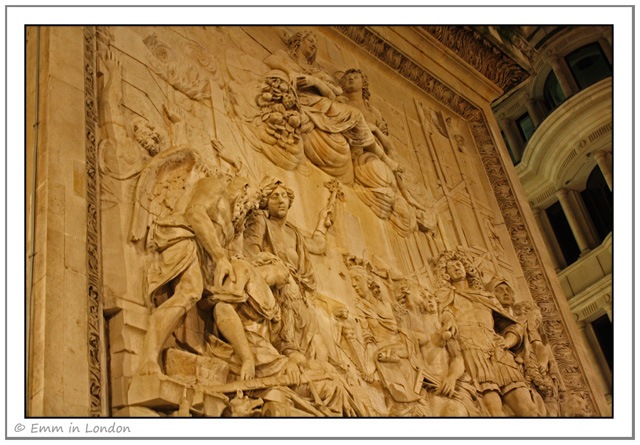 The Monument to the Great Fire of London

Conspiracy theories were rife after the Great Fire of London. People thought it was retribution for the August 1666 raid on the Dutch town of West-Terschelling  in which the entire town was burned down by the English Fleet. It didn’t take long for Londoners to begin killing foreigners, Catholics and anyone else they didn’t like the look of.

It was up to the Duke of York, James to protect these people from the mobs and he began “arresting” foreigners to keep them safe.

So that brings me to the end of my thoroughly useful titbits of information gleamed from the Bowl of Chalk tour.  I absolutely intend to go on Jonnie’s other two walks so do let me know if you’d like to join in next time.

* Have you figured out what a bowl of chalk is yet?  Well, I’ll give you a clue, it’s cockney rhyming slang but you’ll have to visit the Bowl of Chalk website to figure out what for!