Lost in the Hills of Sarajevo

Looking back, we must have assumed the typical pose of lost travellers. We'd walked out of the Bascarsija (old town Sarajevo),  over the river and straight up the road towards the mountains surrounding Sarajevo. We slowed to a halt, took note of a rare street sign and then poured over a map to find our bearings. 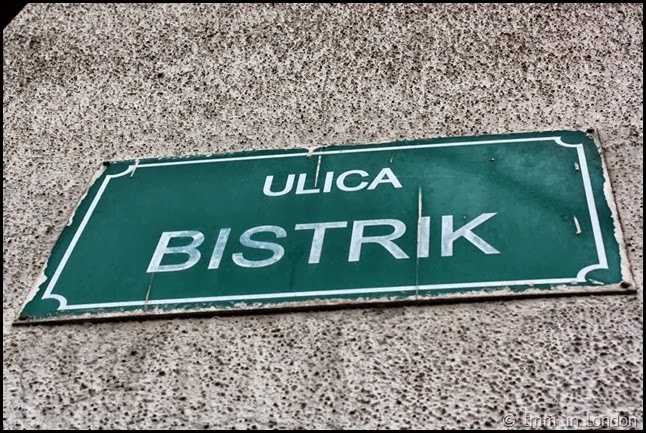 A man had approached us asking, "do you speak English? Are you lost?"  I smiled widely and replied, "yes, and sort of". "We were trying to get lost", I clarified and he smiled knowingly. "Well", he said as he turned around and pointed to a narrow flight of stairs disappearing into the distance, "if you take those stairs they'll lead to the road that goes right around the hills. Any time you want to come down again, just descend another flight of stairs and the road will take you back down to the city". Perfect. We could get well and truly lost now. 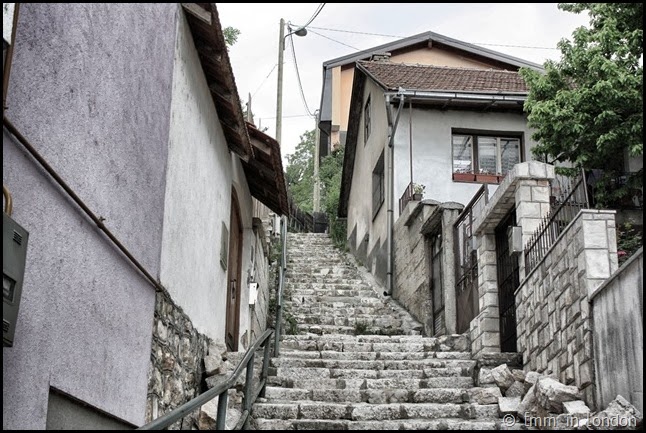 As we parted with warm thanks and good wishes, I asked the man whether he was Irish. "Yes", he replied, "but I live here now". He wasn't the first person to say that to us in the past two days and I was starting to realise that Sarajevo is a very difficult city to leave.

I was just wondering to myself whether there might be a statistical correlation between speaking English and being lost when it began to rain. Of course, who else would be out walking during a thunderstorm with only a waterproof jacket and no umbrella?

We climbed the steps towards the motorway and turned at the last minute to walk down a narrow pathway leading behind the rows of houses. The stone path was uneven, overgrown and slick with rain. Most people would rush for shelter but incredibly, Stephen and I slowed down and stopped to drink in the views of the city below. 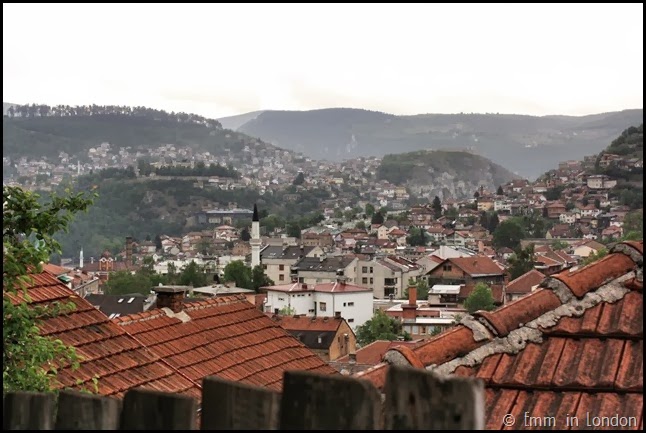 As we continued walking, movement caught my eye and I looked up to see a young teenage boy waving at me from his bedroom window. "Zdravo!", I greeted, the Bosnian greeting for hello. "Zdravo!", he replied but when I asked him how he was, "kako ste?" he disappeared.

We rounded his house and then continued along on the path below when I realised he had popped out of another window. We greeted each other again and then his attention was taken by his neighbour who popped out of her window to chat to him. As we turned another corner on the winding path, I turned back around and he waved enthusiastically at me. I was strangely touched by this friendly, welcoming and unaffected boy and waved back before he disappeared from view. 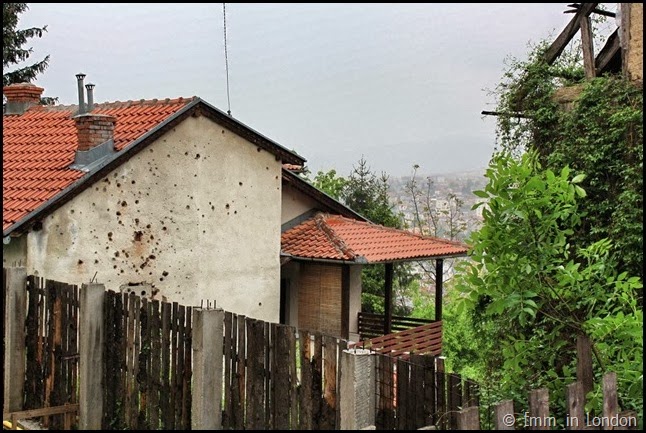 Walking along these narrow pathways, it is impossible to avoid seeing evidence of the war and siege that took place here twenty years ago. There are signs everywhere and many houses are burned out or encased in scaffolding or plastic. But there are far more signs that Bosnians have moved beyond this, that they choose to define their lives rather than their past.

We soon came to a main walkway. To our left steep, narrow stairs lead back up into the hills while we could see the main road leading back into the city on our right. We were very wet and Stephen asked me which way he wanted to go. "Well", I began, "if we turn right, our adventure is over but if we turn left then it will continue". I knew that I had to let him choose, walking along slippery, uneven pathways in the Sarajevan hills in the rain isn't everyone's idea of fun.

He turned left, as I knew he would, and the adventure continued. 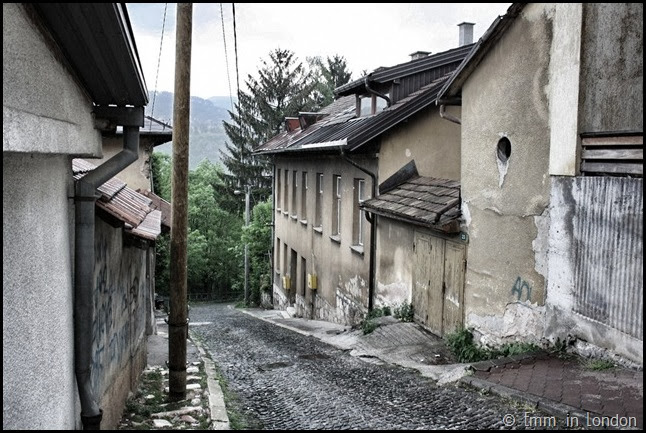 It was at this point that we realised the rain we had experienced was simply something of a prelude, preparing us for the main event to come. As we continued winding our way along the narrow paths and stairways, the rain came down in a torrential downpour and we were drenched. 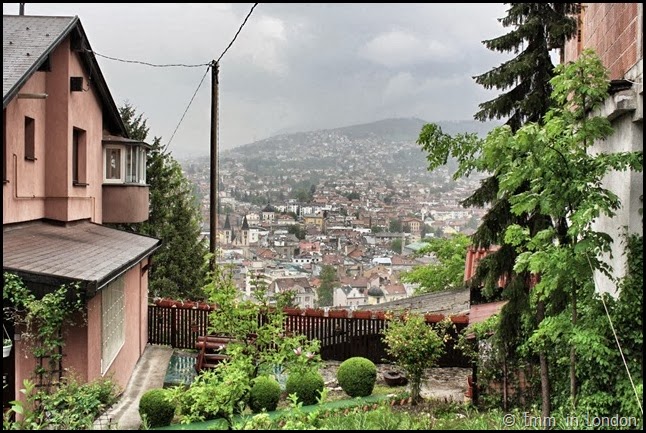 We eventually emerged onto the highway where we encountered more breathtaking views but the path was not as interesting. We chose to cross over the road and took some stairs back under the highway and into the hills. As we stood there somewhat bedraggled and dripping with water, an elegant woman walked towards us, casting a curious glance at us as making me feel quite self-conscious in my shorts and walking shoes. 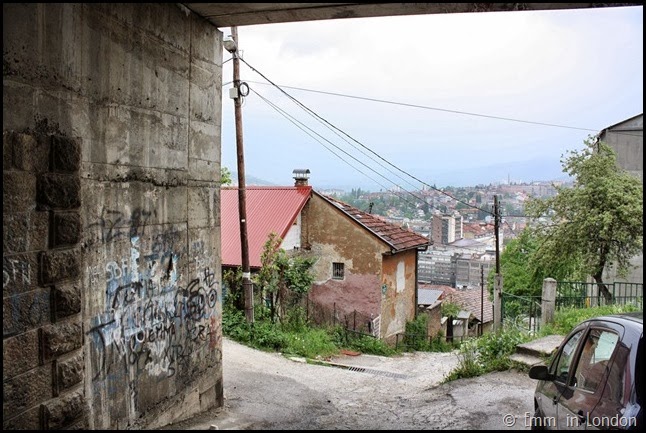 We eventually came to a point where the path ahead was too steep and slippery to walk down and we sheltered in the shadow of a house for a short while. My heart was hammering against my ribs and my legs felt like jelly. I thought I was fitter given all the walking I do but I guess nothing can prepare you for navigating steep inclines and slippery slopes in the rain. 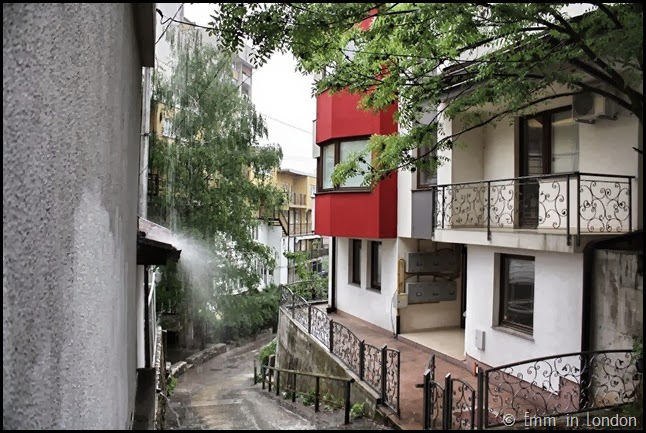 For the longest time, Stephen and I stood in silence, lost in the moment. I allowed myself to dwell entirely in the present, watching the rain cascade from a gutter to my side and pound the house across the road. This is what I love: exploring and discovering neighbourhoods, walking until I'm breathless and seeing what houses look like in other countries. These streets felt so familiar to me, so European, and in this moment Sarajevo became not a foreign city but a city like any other. A city I could make my home.

All of these photos were taken using my Canon 1000D. I wanted to capture the mood of that wonderful day in Sarajevo and have applied a desaturation filter in Snapseed. I love desaturation (a little bit too much judging by my Instagram gallery) and thus I am careful not to use it too often!

Have you every become purposefully, truly lost in a city? Do you also like seeing how people live and how the houses look in foreign cities?