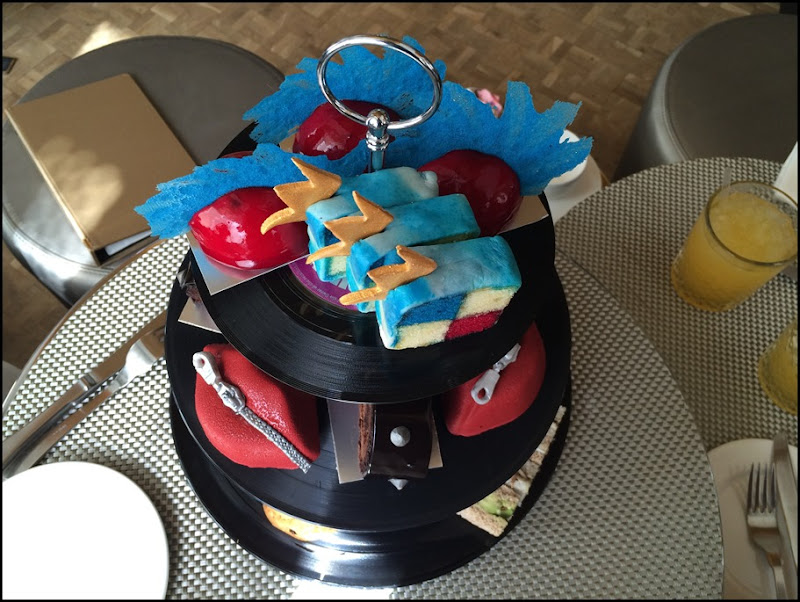 It's no secret that I love afternoon tea but what you might not know about me is that I was a goth during my formative years. If you've suddenly conjured up an image of black hair, black eyeliner, Doc Martins and torn tights, may I complete that vision with a mention of the spider's web that I had shaved into my undercut? I was quite the horrible coffin kid. (Actually, I was lovely but somehow wasn't keen on people knowing that).

My fascination with the alternative scene had started a good ten years before that in early 1980s London. I was utterly fascinated by the punks in Trafalgar Square and had to be forcibly dragged away from them because I couldn't stop staring. I wanted nothing more than a pink Mohican (I was 8) and a tall, skinny punk boyfriend.

Imagine my delight on learning about the W London Leicester Square Anarch-Tea, an afternoon tea especially designed to mark 40 years of Punk. Now Londonist did not have very nice things to say about the concept of a punk afternoon tea, accusing it of representing everything punk stood against, and I can't speak for the original punks in Trafalgar Square but you know what? I really enjoyed it.

The presentation was lovely and colourful, the food was delicious and it was the first time I’ve been served afternoon tea on original vinyl! We arrived fresh from our tour of the Rolling Stones Exhibitionism at the Saatchi Gallery. After some confusion as to what constituted a 'complimentary cocktail' and what we were going to get charged a lot of money for, we agreed that we would indeed love to try the signature Lust for Life cocktail with Cachaca, zesty lime, sugar and passion fruit. There were three of us on the day, all with different tastes in cocktails, and we were quite pleased to note that we all loved the cocktail. It was delicious and went down well on such a hot day.

It took a while for our plates to be brought out but eventually they arrived. Sarah and Stephen helped themselves to the Gang of Four finger sandwiches including smoked salmon with cream cheese & pea shoots; roast beef with horseradish and watercress; cucumber with sour cream and black pepper; and Aged Montgomery Cheddar and red onion marmalade. On this occasion, I had not opted for the gluten-free option, which I've decided is something I definitely need to be more diligent about in future, but I cannot eat onion or salmon. I therefore had the same beef and cucumber sandwiches but I was treated to a delicious avocado on fresh brown bread as well as a creamed mushroom one. They were very fresh and very tasty.. 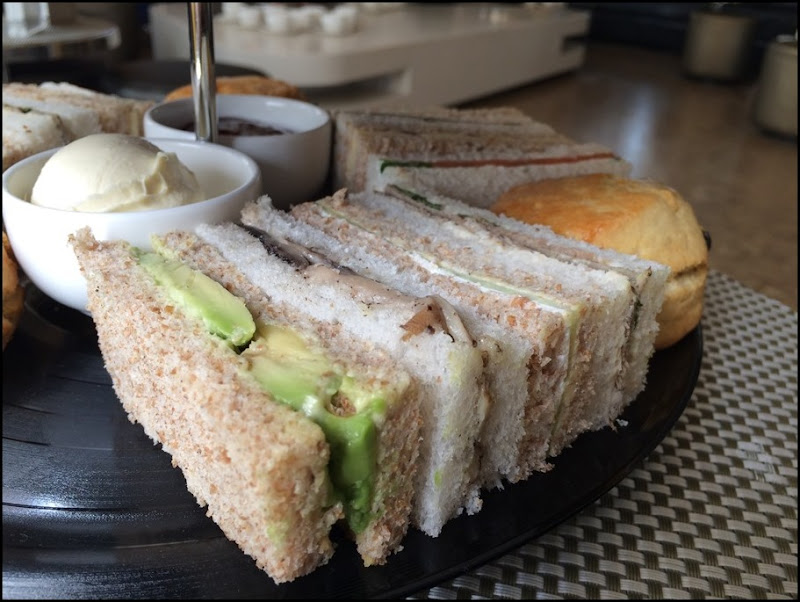 Sarah and I had our scones next while Stephen decided to spoil it all and head straight for the desserts. The scones were okay but let's face it, we were there for those desserts!

I started with the God Save the Queen - The Sex Pistols vanilla and almond Battenberg cake. Spoilery Stephen had thought it to be too sweet but I love almonds and marzipan and thought it was just perfect. I started off with this one because I thought I'd like it the least but I actually liked it a lot. Next up was the Going Around in Circles - Alternative TV studded dark chocolate roulade. Again, Spoilery Stephen had thought it too sweet but chocolate lover me thought it was quite nice. Very rich but really, what do you expect with a big swirl of chocolate goo? 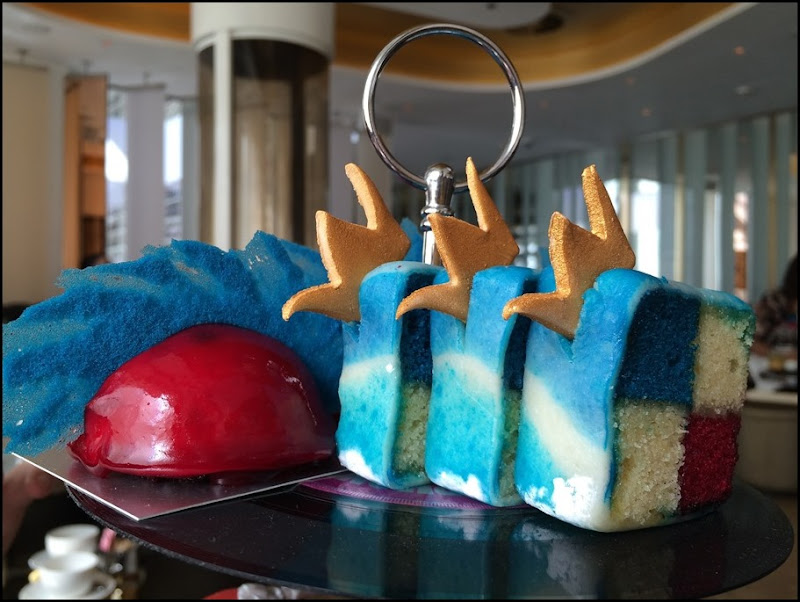 Next was The Mohawk raspberry & lime mousse. This was hands down my favourite dessert of the four. Tantalisingly sour with the lime and sweet with the strawberry, I polished it off in no time. Stephen didn't finish his. We finished off with the Shut Up - The Stranglers, a frozen strawberry & basil parfait. I was quite pleased that I managed to crack the shell without sending it flying across my plate like Stephen did! 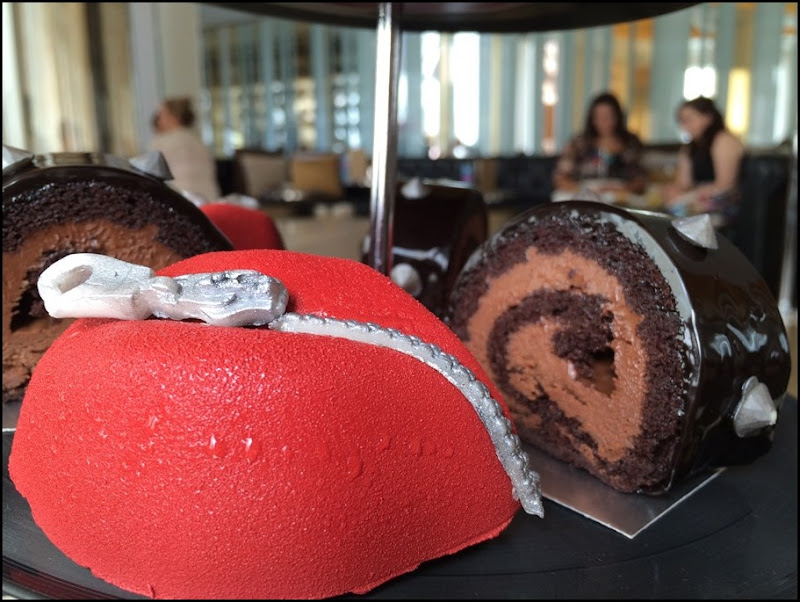 Tea is obviously a central part of any afternoon tea experience but on this occasion, it was so hot outside and our cocktails so good that it wasn't a priority. Nevertheless, I made the right choice with a lemon & ginger tea, while Sarah had fresh mint tea and Stephen had English Breakfast. Sarah and I were delighted to see that our teas were all made with completely fresh ingredients.

All in all, we loved the Anarch-Tea although you can see from above that Sarah and I enjoyed it a lot more than poor Ste so it's perhaps not for those who don't have a sweet tooth. 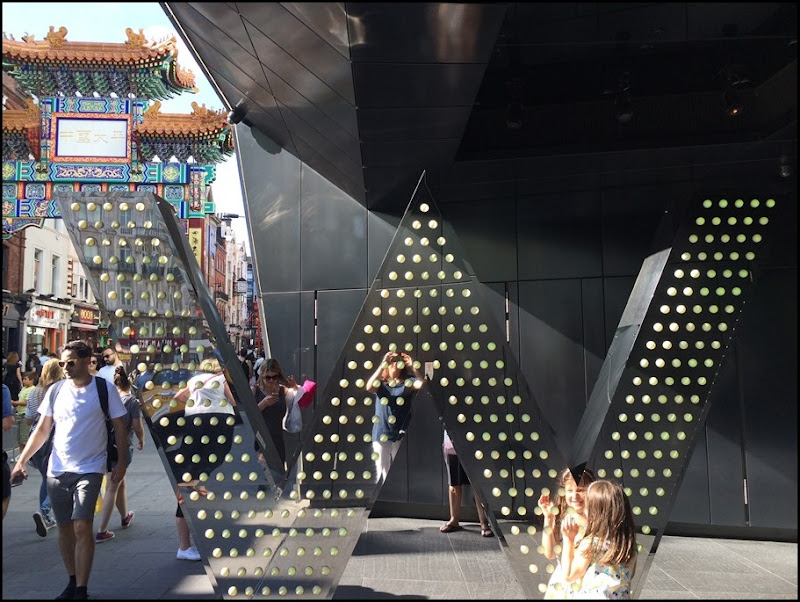