After a hectic and tiring weekend attending the O2 Wireless Festival 2008 it was finally time for our summer holiday to Turkey.

We booked through Teletext Holidays Online and got a fantastic deal for a week all-inclusive to the Grand Newport Hotel in Gumbet in Turkey.  For flights, seven nights accommodation, all meals and local drinks, all transfers plus an air-conditioned, sea facing balcony room, we paid about £750 for the two of us.  The hotel was four stars and the rooms were modern, clean and very comfortable.

On to the holiday then...

We got to the airport nice and early, which is to say we arrived at about 4.30pm when our flight was scheduled to leave at 10.30pm.  Well, you can never trust London motorways so we weren't taking any chances!  (I still have nightmares from spending 3 hours stuck on the M25 north when I picked my brother up from Liverpool in February).  We soon found out that the flight was delayed by one hour and so we settled down in the Frankie and Benny's for a yummy meal and airplane magazines for Stephen and Killer Sudoku books for me. 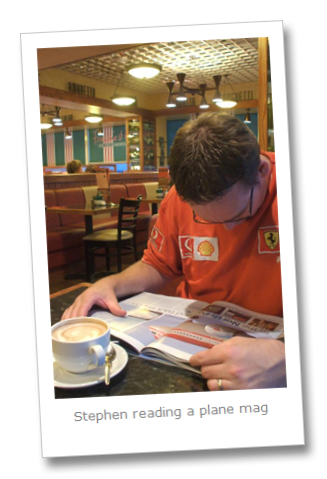 The flight left at 11.30pm and it was about four hours long which meant that we landed in Bodrum Airport about 5.30am (they are two hours ahead of English).  The flight was quite horrible and I didn't sleep at all despite having a seat by the door and hence lots of leg room. 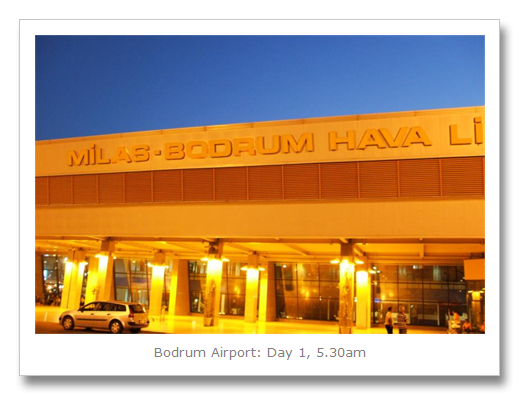 My first impression of Turkey was that it was really pretty and warm.  Unfortunately, it was a lot brighter than this picture shows and my poor sleep-deprived eyes could not take any decent photos.  Less than 45 minutes later, however, and we were in paradise.  This was the view from our balcony at about 7am on that first morning: 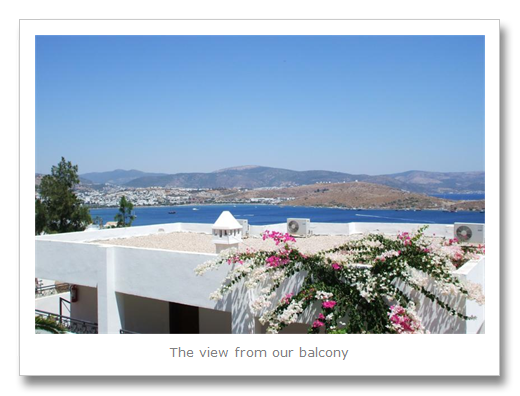 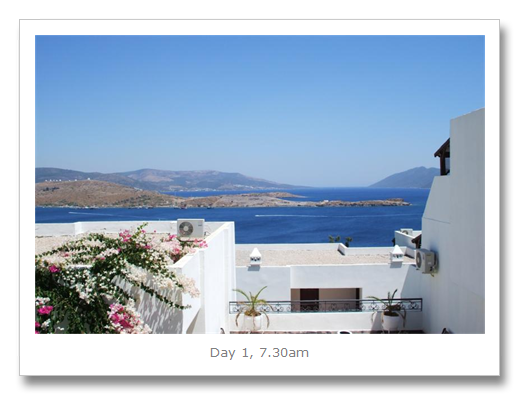 That is the Aegean Sea that you can see there.  It is very warm and very, very salty.

Mere moments after this photo was taken we passed out and only emerged at about 3pm that afternoon.