I can't believe it has been a week since I last updated and I apologise for that. I've been sick with an incredibly sore throat and an irritating cough that doesn't let me get much sleep. 'Fed up' and 'exhausted' are the terms that would best describe me right now. The worst part is that this is all caused by the remaining dregs of the flu virus and nothing can be done for it except to treat the symptoms. My Dad is suffering from the same thing and wasn't even able to watch the match at the pub today! Big shout out to my Dad then and I hope we both get better soon.

On 27 December we went to my favourite city on the whole planet - Liverpool. From the time I was about 18 months old until just before my 9th birthday, we lived in St Helens which is a town situated right inbetween Manchester and Liverpool. We moved to South Africa in 1982 and I cannot begin to describe how much I missed 'home'. The city of Liverpool reached mythical proportions in my mind as I dreamed time and time again of returning to England. There was always the danger of a Great Gatsbyesque experience and that when I eventually did return in 1989, it would somehow disappoint. But it didn't.

I wish I was back in Liverpool, Liverpool Town where I was born.
There ain't no trees, no scented breeze, no fields of waving corn
But there's lots of girls with peroxide curls and the black-and-
tan flows free,
With six in a bed by the old pierhead and it's Liverpool Town for me.
- From "I Wish I Was Back in Liverpool" by Stan Kelly and recorded by the Dubliners

It's incredibly hard for me to put into words what it is about Liverpool that I love so much. There is something for everyone there with the history of the Beatles, museums, galleries, music, pubs, the heavy shelling in WW2, the pierhead and the stories of Irish immigrants, trade and commerce and the incredible strength to carry on. For me personally, Liverpool was the town that my Dad and I walked around time and time again as we visited all of the pubs and got to know each other again as adults. Hopefully some of the photos in these next couple of posts will communicate my love for this city and explain my glee at it being a nice sunny day that day. 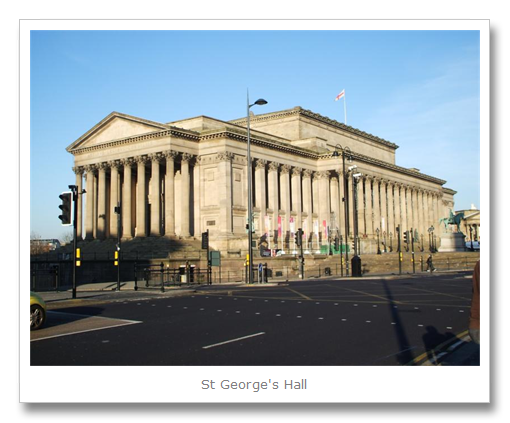 As you come out of Lime Street Station, you see St George's Hall, one of the finest examples of neoclassical architecture in Europe. (I was told that it was the biggest but I can't find a link for that online). St George's Hall is part of the World Heritage Site at Liverpool and it is a Grade I listed building. As a former property manager, perhaps I find this more interesting than most people!

The hall has just been restored and was reopened in 2007. Apparently it is amazing inside but we didn't see anything to suggest that it was actually open to the public that day.

Liverpool was the European Capital of Culture 2008 and the city really caters towards tourists. There are sign posts and map boards everywhere and a street vendor gave us a tourist map for free! Liverpool has also really changed since last I was there and it was difficult to decide what to show my in-laws. In the end we decide on taking the Beatles tour and then heading down to the pierhead and the Albert Dock. We came back up through the brand new Liverpool One district before going home but unfortunately did not make it to St Luke's Church this time. St Luke's is a bombed out shell of a church that still stands in the centre of Liverpool - maybe I can go back in the summer and do a bit of a WW2 tour.

Well, all of those exciting travels will have to wait for during the week as I am about to fall asleep right now!!