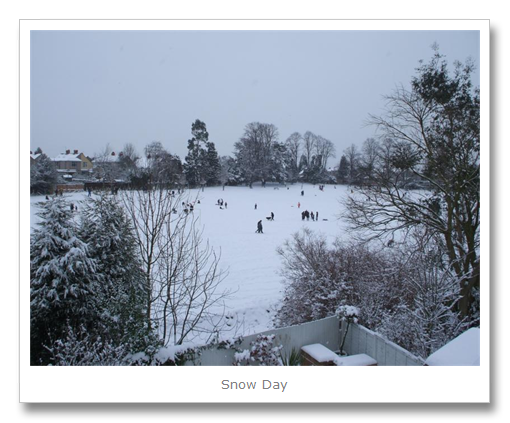 We had our first snow day today.  This picture shows the field behind my house with all the children playing on sleighs and building snow men.  I had to stay home for the day because all of the trains were cancelled.  Luckily, Ste and my brother work outside of London and their colleagues picked them up and took them to Orpington and Dartford respectively.  I was a bit disappointed after sitting around in my work clothes for three hours to learn that apart from there being no trains or buses, our offices were closing at 1pm and those of us that hadn't made it in would have to take a day's annual leave.  I tend to sleep in late and lounge about in pyjamas on my days off - not get up earlier than usual to make a special effort to get in and sit around waiting in my suit and jacket.  Grumpiness aside, once I realised it really was a day off, I made some Milo and watched Demons and Being Human from the weekend.  I also experimented with changing the layout for this blog, as I am a bit tired of this layout, but that didn't go very well.

The most amusing part of the day was observing my pets' differing reactions to the snow.

Cats
Early this morning, Seth was being an incorrigible pain in the neck bold and was meowing and asking to be let out.  So I opened the window thinking he would feel the snow on the window sill and realise that it was to wet and cold to go outside.  He put a tentative paw on the window sill and quickly shook it; but instead of coming back inside, he launched himself out of the window and promptly disappeared!  All I saw then was him shaking his back paws as cats do when their paws get wet and forging a way ahead in the snow.  Before I could do anything he sped off and was gone.  Oh dear.  I had to leave a window open for him then as I went to bath but soon he was back announcing at the top of his lungs something that sounded remarkably like, "Mum! I'm home! And wet! And cold! Close the windows quick!"

Well, his wet and cold experience didn't really leave an impression because a few hours later I was confronted with these friendly faces as I walked into the sitting room: 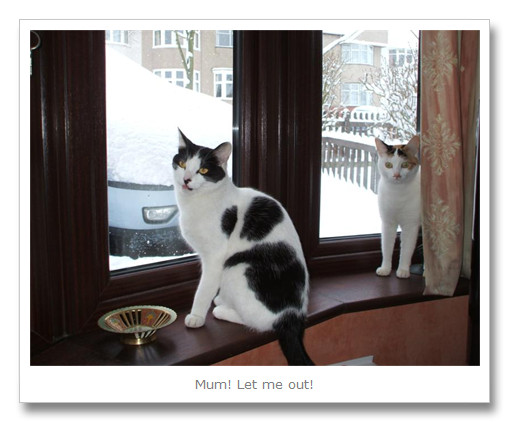 I promise you! He was giving me a right mouthful!  Summer supports him but won't actually go outside herself.

Well, as you can see, he got kind of insistent after a while so I hauled on my wellies and went outside the front door with him.  He immediately ran to the shelter of the bay window, complaining about the cold all the way!  Then he ran under the car and sat forlornly under the engine as if he were the most hard-done-by cat on the planet.  Unable to coax him from under the car, I returned inside and he came shooting in at the sound of the door.  Thankfully, that was that and he seems to have accepted that it is too cold and wet to go outside.

Dogs
Considering how terrified our dogs were of our swimming pool in South Africa, I never imagined that they would like snow so much!  I had opened up the back door to see if the dogs needed to pee and they just stood there watching it snow.

That wasn't so much fun for me so I went inside to make some tea.  Suddenly, I noticed the pair of them prancing about in the snow like two little puppies, and they were even playing about with a rubber toy between them which is something they never do (share, I mean.  They are very possessive over their toys).  It was so funny to watch! 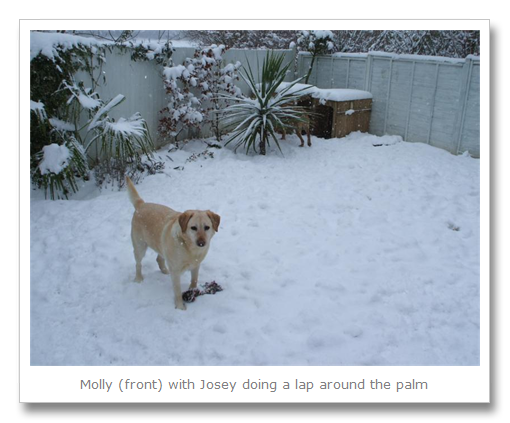 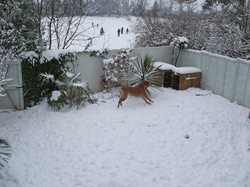 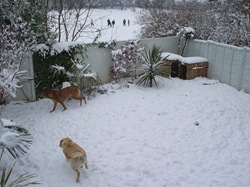 In the end, it was a pretty fun and exciting snow day!  Now to cook some dinner!