After the brief interlude in Central Park I made my way over to The Metropolitan Museum of Art.  I’d tried to go through there on the Monday but it had been closed. 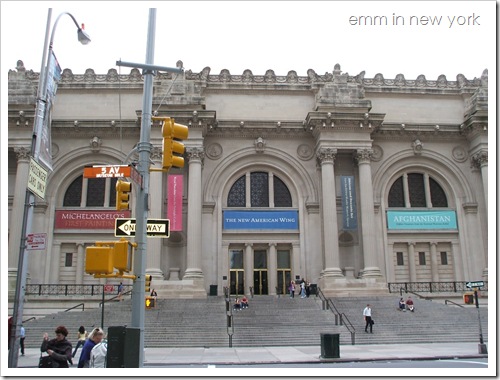 When I first got into “The Met”, I was quite overwhelmed and didn’t know what to do with myself.  There was just so much to see and so many iconic and important pieces of art and I must have flitted about aimlessly for at least half and hour.  I wafted through The Pictures Generation (1974 - 1984) exhibit and an area with Rodin sculptures before doing a u-turn and briefly looking at an exhibition of art from Afghanistan.  I just couldn’t settle down though. 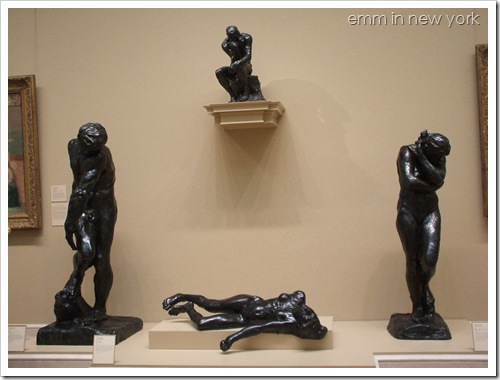 Rodin's Adam, The Thinker, Eve and The Martyr 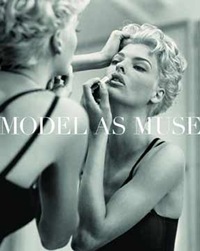 I then wondered into the stunning exhibition The Model as Muse: Embodying Fashion.  This was a fabulous tour through fashion photography and the modelling world since the 1960’s.

The exhibit featured photographs, magazine covers and stories of the designers and the models and was complete with actual dresses starting with the geometric shapes of the 60’s mini dresses right up to the fashions of the last couple of years.

It was fascinating to walk through the exhibit and see the iconic rise of the mass fashion and supermodels.  It was quite sad that no photography was permitted.

The last stop in my tour of The Metropolitan Museum of Art was the phenomenal exhibit Francis Bacon: A Centenary Retrospective.  I wasn’t really familiar with Francis Bacon before I went into this exhibit and it made such a great impression on me.  Once again, we weren’t allowed to take photographs but I wrote pages and pages in my notebook about what I saw.  I’ll try my best to describe my experience with images of my favourite pieces of his work taken from the internet.

Francis Bacon was born in 1909  and hence the centenary retrospective.  His first major piece was the 1944 triptych Three Studies for Figures at the Base of a Crucifixion.

He had several images that appeared to be caged and apparently he was trying to portray the corrupting influence of power. 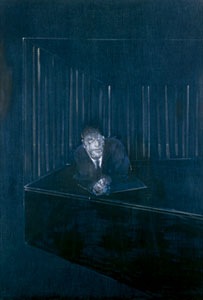 He did a series of “Man in Blue” painting which were quite impressive in their message and the feeling of dread that they conveyed.  They represented the cold war anxiety and the threat that Bacon experienced at a personal level due to his affair with Peter Lacy.

Three Studies for a Crucifixion, 1962 [source]

This piece made me stop in my tracks and stare for quite a while.

“Absolutely disturbing and essentially powerful.  Reminds me of the imagery of [the film] The Cell.  It was no doubt influenced by Francis Bacon.

I wonder if he saw death?  Because he imagines it close to photos I’ve seen of gunshot victims.  I could never have imagined the actual damage of those – what an imagination!” (from my notebook)

His paintings following the suicide of his lover George Dyer in 1971 were really powerful.  In these paintings, he exorcised his grief and guilt.  His guilt was evident in the holes and the emptiness.  He was painting a man that was withering and destroying himself.

The central figure is surrounded by vultures and alludes to the Ancient Greek legend of Prometheus, a figure whose liver was perpetually plucked out each day by an eagle only to have it grow back again.

Having dealt with the suicide of a friends some years back,  identified so strongly with these paintings and with his process.  The idea of Prometheus was especially disturbing as I remembered waking up each day only to live through what had happened again until I finally came to accept it. Such is the power of this art that it took me right back to that time. 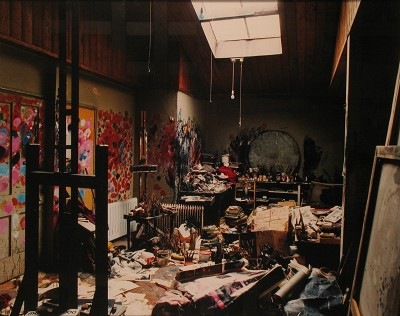 Towards the end of the exhibit there was an entire wall imprinted with a photograph of Francis Bacon’s studio.  My poor, ordered, near-obsessive mind struggled for ages to comprehend such absolute mayhem and then I remembered my rather peculiar method of writing essays at university! I used to do all my reading and then write random, inspired paragraphs on little scraps of paper.  Then I’d sit in the middle of my bedroom floor and arrange the scraps of paper in a circle around me in a structured order.  I would then type out the essay, write an introduction and conclusion and finally, I’d consult my reading material and randomly slot in the required two references per paragraph.  This crazy performance was unfortunately perpetuated by really high marks and praise from my lecturers. 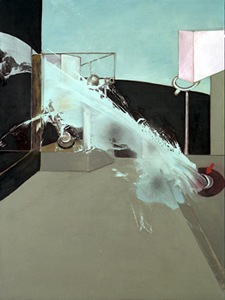 After the oppression of the previous section relating to George Dyer’s suicide, I found the final part of the exhibit to be surprisingly open and liberated even though a lot of his work was motivated by the death of those around him.  This was the section on Francis Bacon’s final decade from 1981 to 1991.

It is a pity that it took me so long to post about this (bad blogger!) because both the “Model as Muse” and the Francis bacon exhibits ended in August.  They were excellent exhibits though and as you can see, they left a lasting impression on me!  Perhaps next time I undertake a big tour, I will post about the temporary exhibits first.