On the Friday morning I woke up at Officially Too Early© Hour and by 6.30am I was standing at Penn Station bus station waiting to catch a coach to Washington DC.  I was tired and my inner body clock was mutinous, claiming to officially not know whether I was coming or going. 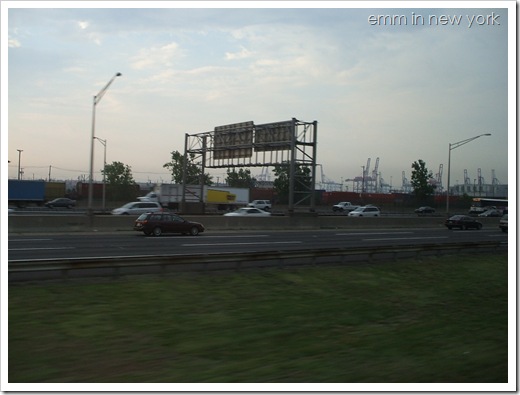 While so much of my trip to the States remains crystal clear in my mind, that morning certainly doesn’t and everything I had tried to cram into 7 days was finally catching up on me.  Good thing I had no idea what was lying ahead of me then!  The only thing I remember about the coach ride to Washington DC was how awesome the New Jersey Turnpike was, that there was no one sitting next to me or in the rows before or after me and that it took 4.5 hours.  Oh, and we rode through New Jersey and Maryland to get there and I might even have touched Pennsylvania and Delaware too but it was all a bit of a haze!

Think I’m on the New Jersey Turnpike.  Wow.  What a system.  I’d heard of 9-lane highways before but wow.  That’s just one direction.  On way to DC.

Listening to Tracy Chapman, Angie Aparo and Cat Stevens.  Major iPod FAIL – no Albert Hammond.  That’s impossible.  I’m sure I had him on CD.

Oh, and packed a long-sleeved shirt today for warmth.  Thank goodness.  No umbrella though.  We’ll see how that pans out.

As you can see, I’m just the queen of eloquence and witty repartee when I'm tired.

The bus arrived in Washington DC sometime at 11.15am.  I made my way down 10th Street NW to the Washington Welcome Center where a nice lady gave me a brochure for a sightseeing tour which doubled as a free map.  I then went into the diner next door and had a big old American breakfast and then I felt human again and ready to tackle the day!