Ghost Stories at the Duke of York’s Theatre 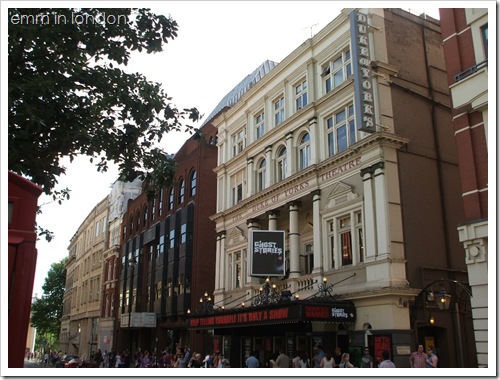 Billed as “a truly terrifying theatrical experience”, Ghost Stories comes to the West End following a sell-out season at the Lyric Hammersmith.  Ghost Stories is written by two men who need no introduction in the arena of the dark and macabre: The League of Gentlemen's Jeremy Dyson and Andy Nyman who is best known as co-creator and director of Derren Brown’s television and stage shows.

The play is narrated by Andy Nyman in his role as Professor Philip Goodman, an expert in parapsychology and a sceptic at heart.  He begins by essentially debunking the idea of paranormal phenomena but then intriguingly introduces the idea that not everything is as it may seem.  As he gives a mock lecture to the audience he explains that in twenty years of professional experience, he has come across only three cases that have been different enough to warrant his attention.  These are the cases that disturb, that keep him up at night.  I won’t spoil the play for you by telling you about the three cases but I can tell you there was a lot of screaming, squealing and hiding behind partners on the part of the audience.  It is certainly not advisable to hold a drink in your hands whilst watching the show.

One of the best aspects of the show was the design.  I had already noticed the dismembered leg in the foyer of the theatre and the main arena was transformed from a stately old theatre into a horror house of sorts.  There was police tape and cob-webbed gas lamps to give a truly eerie experience and the overall effect was completed by the seemingly random numbers chalked onto the walls.  The stage had a creepy veil as a curtain which had “safety curtain” painted on in red paint and green, slimy paint on the stage itself.  The set design was really good too with distorted, angular rooms, creepy forests and corridors of old asylum cells to set the general tone of fear.

Ghost Stories is a lot of fun (if being scared and screaming out loud is your cup of tea) and I did enjoy the show.  At times however, the plot did get a little ridiculous or thin and there were certainly times when the audience was laughing or scoffing when they should have been screaming.  In a classic coup de théâtre, there is quite a twist at the end of the play and at first I felt a little bit underwhelmed by the ending.  As I sat on the train on the way home though, I came to appreciate how cleverly all the pieces fit together as I sifted through the various clues that had been left throughout the play.  Having said that, I didn’t feel that it was like watching a live horror film, as one audience member had previously stated and it certainly did not reach the levels of scariness and tension that films do.  I can imagine that it is quite difficult to portray that nail-biting, terrifying suspense in front of a live audience and I had always been sceptical about the ability to bring such a story to the stage.

During the play, the one impression that I did have was surprise that they managed to secure a major West End theatre for the glorious summer and early autumn season as in spite of the impressive set design, this is really more of a community theatre production.  Nevertheless, if you are looking for a fun and somewhat exhilarating 80 minutes, then I would recommend Ghost Stories.  It is not the standard quality we’ve come to expect of West End shows though, so do make sure you’ve seen all of the big ones first.

Ghost Stories also stars Ryan Gage, David Cardy and Nicholas Burns and will run at the Duke of York’s Theatre until 7th November 2010.  Tickets range from £22.50 to £47.50.