A Visit to London's Science Museum 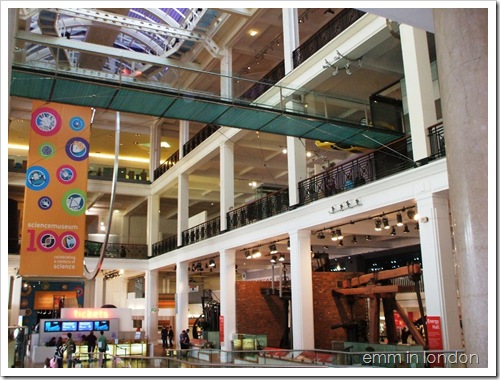 The best thing about London, without a doubt, is that most of the museums and art galleries have free entry.  Sometimes they contain paid exhibits (which usually run for a limited time and need the financial input) but you can genuinely spend days on end wondering around amazing permanent exhibits for free.  You certainly need days on end too!  We spent three hours wondering around the Science Museum and we barely managed to cover a fraction of this massive building that stretches over seven levels.

I’m going to start off by telling you that the Science Museum is pretty amazing.  It is the sort of place that would be worth it even if you were paying a pretty hefty entrance fee because it is just jam-packed full of technology and history.  There were a couple of areas that were undergoing refurbishments when we visited but I see that those were open and completed in time for the summer.

Hopefully I can manage to convince you that it is not only a place for men and school children on school excursions! 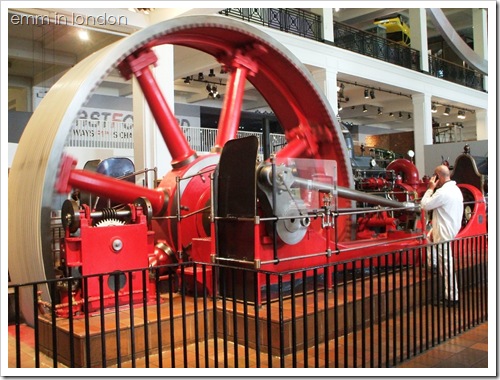 Steam power played a massive part in the history and development of this country and they have some absolute gems in this collection.   Walking through the energy hall reminded me of so many things I’ve learned about in the history and traditions of England: factories, mills, steam engines, the industrial revolution, Manchester, the cotton industry and for some absolutely unknown reason, Oliver Twist.  If for no other reason, visit the Energy Hall for some absolutely brilliant photographic opportunities!  I love the photo above because that wheel was spinning really fast and the photo came out great.

The Atmospheric Pumping Engine (below right) is one of the oldest remaining remnants of these steam engines.  The date they gave is 1791 but I don’t know if that was the commissioning or decommissioning date. 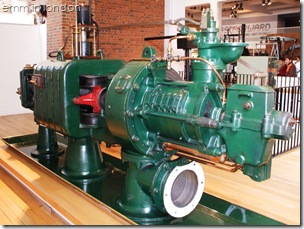 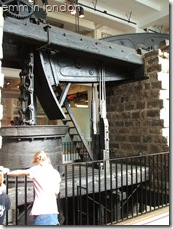 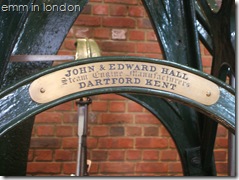 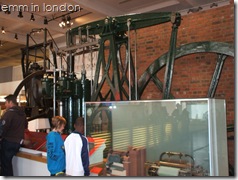 I'm such a geek.  I loved that this machine was from Dartford because that is where I live now!  Dartford was indeed an industry hub for several hundred years and in fact, they are just tearing down the last remaining factories in the area now. 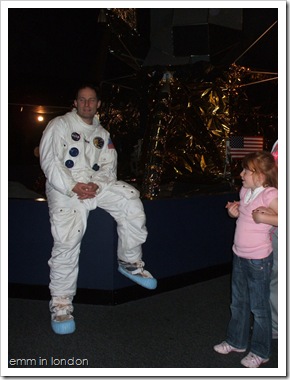 There was a lot to see in the Exploring Space section but the lighting was not conducive to taking photos.  Anyway, I met an astronaut!!!  This is Gene Cernan who was the last man on the moon as he was the last astronaut to re-enter the Apollo Lunar Module during the final manned lunar landing.  He was very interested at first to know why I was taking photos and making notes but seemed to lose interest once he learned that I was just a lowly blogger.  Sheesh, thank goodness he was an astronaut and not just an actor or something!!! 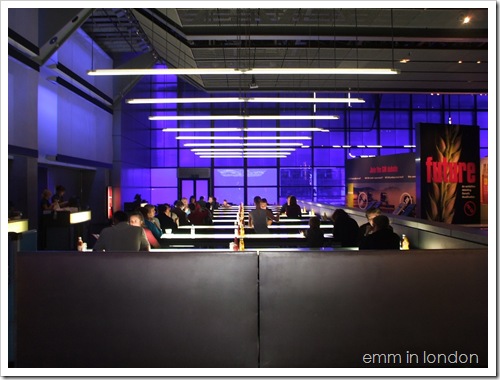 We had lunch in the Deep Blue Restaurant.  It is a lovely looking restaurant and I just had to eat somewhere that looked so futuristic but it was slightly on the ridiculously expensive and overpriced side!

If you read my post about visiting the National Air and Space Museum in DC last June, then you’ll know that I am crazy about old air craft and space ships and so on.  So visiting the third floor Flight exhibition was akin to Charlie Bucket entering the chocolate factory. 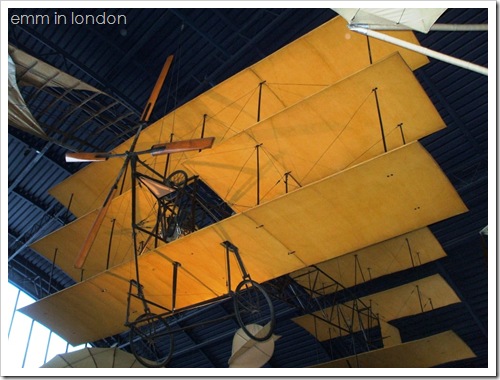 This paper and wood airplane was flown by Alliot Verdon Roe on 13 July 1909 at Lea Marshes, Essex.  Roe was the first Briton to fly an all British aeroplane, the Roe I. 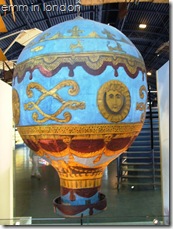 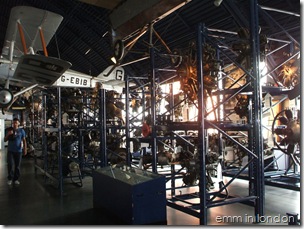 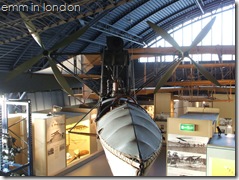 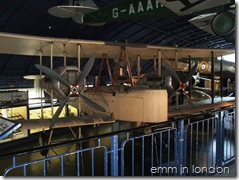 They suggest spending 30 minutes in the Flight exhibition but I have to disagree! I would suggest at least an hour or two as there is just so much to see and so much to take in and absorb too.  The exhibit starts with the very first flights in human history and moves right through modern airplanes and technology so yes, 30 minutes is definitely not enough! 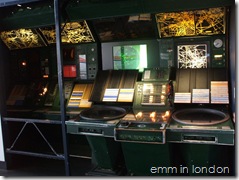 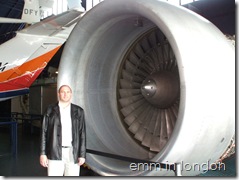 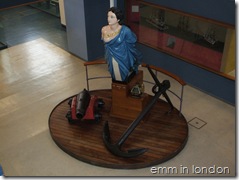 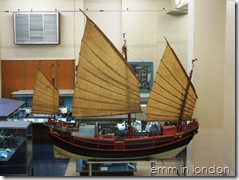 I have been interested in shipping and maritime history ever since I visited the Merseyside Maritime Museum in December 2008.  The museum suggests that you spend 15 minutes in the Shipping section and I would really disagree.  This section is full of models, artefacts and shipping paraphernalia and you’d be doing yourselves a real disservice to just rush through this section.  Realising this, we decided to move on and vowed to return to the Science Museum one day to get a real look at this section. 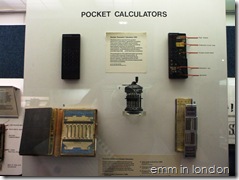 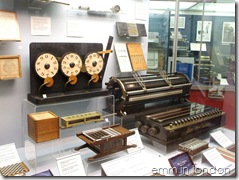 The Computing and Mathematics sections are two sections sitting next to each other on the second floor.  They are really interesting but not especially good for photos, hence the lack of photos.  We spent a good hour in these two sections (and once again, the museum undersells them by recommending 15 minutes each) as my friend Patrick and I are just geeky like that!  If you are interested in computers, logic or mathematics, I would recommend that you go first to this section as it is really interesting.

Our last stop in our tour of the Science Museum was the Making the Modern World exhibit.  I didn’t make it very far because right there at the front of the hall was Stephenson’s Rocket. 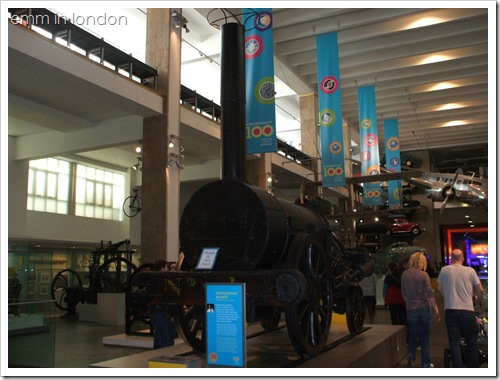 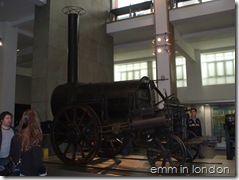 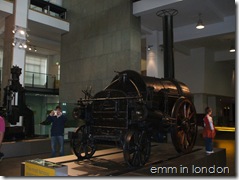 Until the age of 9, I lived in Rainhill, near Liverpool, which is where the Rainhill trials took place in 1829.  The trials took place to determine the best and most competent design of steam engine and Stephenson’s Rocket won.  It was not the first steam engine ever but it set the standard for steam locomotives for years to come.

The Rocket has a very special place in my heart which is possibly why i couldn’t stop photographing and touching it.

That concludes our visit to the Science Museum! It is a brilliant museum and well worth the visit.  Actually, it is well worth several visits!