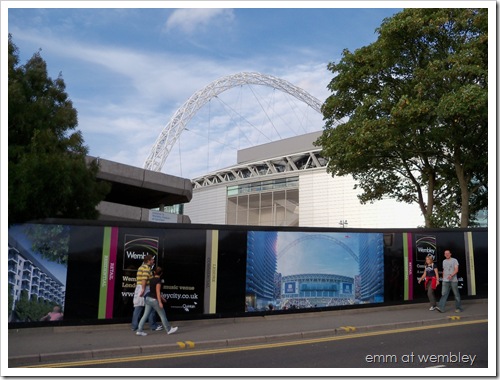 Back in September, I went to see Muse at Wembley Stadium.  I’m not sure why I never posted this review but I suspect it had a lot to do with how disappointed I had been in my photos from that evening.  Nevertheless, I did make some detailed notes about the gig and have decided to swallow my pride and go ahead with the posting it!

It is notoriously hard to get concert tickets in London as they sell out within minutes of going on sale.  It is well known that many of those tickets are bought in bulk by ticket touts intending to sell them online or outside gigs for hugely inflated prices.  In 1995, I paid £100 for £30 tickets for Glastonbury and in 2004, I paid £80 for £25 Pixies tickets.  I consider, therefore, that I have paid my dues and I will never, ever pay ticket tout prices for a gig again. 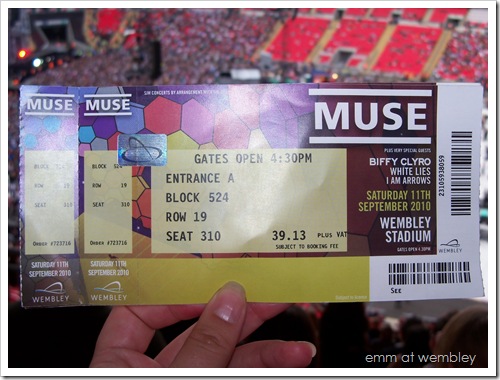 Which is a problem.  Music has always been a passion of mine and attending concerts has always been an important measure of that passion.  Earlier this year, there were but four bands that I considered to be among my favourites that I had not seen in concert; excluding the bands I did see at Exit Festival they were Radiohead, Muse, Collide and Editors.  At the end of 2008, I was really disappointed when I had gone online as booking opened to buy Muse tickets and they sold out within minutes.  I did not want to be disappointed again in 2009 and joined up to Muse’s fan club with the specific intention of getting tickets this time.  It worked.  I might have only managed to get nose bleed seats half a stadium away from the stage but at least I was finally able to watch Muse at Wembley on September 11, 2010. 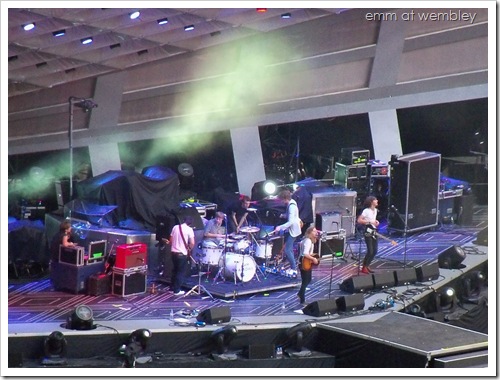 I Am Arrows were the first support band of the evening.  They played quite a short set and it could not have been easy for them being first band in a line-up when the crowd was obviously there for the headline act.  They struggled at times to get the crowd really going at all and they seemed lost in the stadium setting but they redeemed themselves with their last two songs.  They played a cover of the Tears for Fears classic “Everybody Wants to Rule the World” which had everyone’s hands in the air and they finished off with their most well known song “Green Grass”. 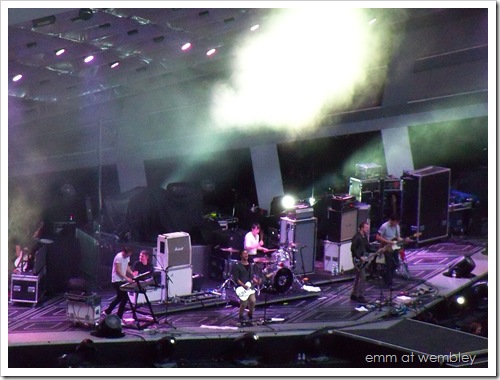 White Lies were up next and immediately seemed more comfortable in the stadium than the previous band.  Their sound quality seemed improved over I Am Arrows too but this might have been down to their confidence. White Lies are one of those bands that I’d heard of but had never taken the time to listen to before last night but I was impressed enough to go out and get their music.  Although White Lies are known to dislike the comparison, it is impossible not to notice the similarity between Harry McVeigh’s lovely baritone voice and that of Tom Smith of Editors.  They played an energetic set and played some of their new material as well as the old favourites “To Lose My Life” and “Farewell to the Fairground” which finally seemed to get the crowd going for the evening. 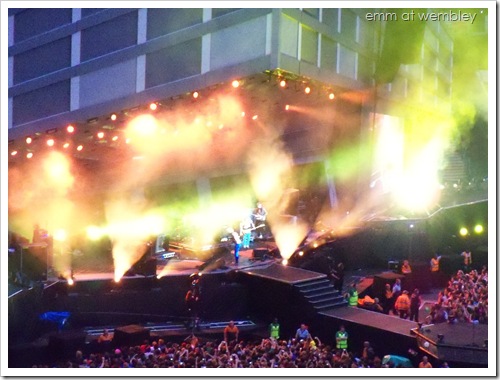 Biffy Clyro were the last supporting act of the evening.  I’ve been listening to Biffy Clyro quite a lot over the past year and reviewed their album Only Revolutions back in March.  I’ve linked to the review so that you can see what the band did look like because they looked nothing like that now.  I was expecting a rather polished rock band but what we saw on stage was just a mess.  To be fair, there was obviously something wrong with their sound because on about the fourth song, vocalist Simon Neil seemed to make a complaint of sorts and the sound immediately improved thereafter.  Which is a real pity because I could barely recognise “That Golden Rule”, “Living Is A Problem Because Everything Dies” and “Bubbles”.  Thankfully, they seemed to get it right for their massive hits “Who’s Got a Match” and “”Mountains” and I enjoyed hearing “Born On A Horse”, “Shock Shock” and “Many of Horror” too.  They closed with “The Captain” which certainly seemed to please the crowd.  Keeping in mind that there probably was some kind of problem with their sound initially, I would still say that Biffy Clyro need to get their act together as this was not the calibre of performance I would expect from a band opening for Muse. 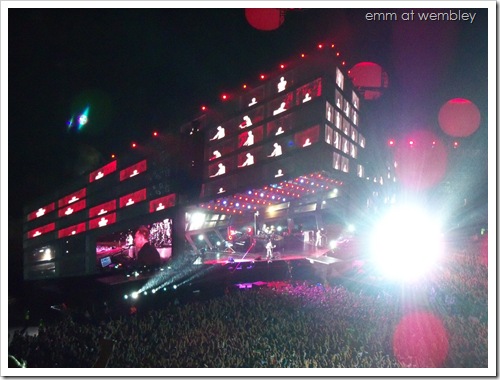 It is not easy to describe a Muse concert without making gratuitous use of superlatives.  Perhaps it would be best to start at the end as Muse played their closing chords: the electricity was in the air and all around me and I stood still, in awe of the fantastic concert that I had seen, more than a little stunned that it was over.  If I were limited to but one single word to describe the concert, it would have to be “perfect”. (Note well: when you live on the other side of London and you have two tubes and a train to catch before you even enter Kent, there is in fact no time to stand in awe of the band you have just seen at Wembley, no matter how great they are.  It is best to keep this in mind to avoid sprinting through stations and literally catching the last tubes and trains of the evening). 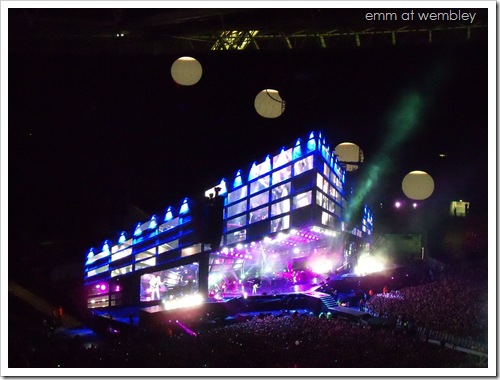 Muse began their set by bursting onto stage and belting out "Uprising", "Supermassive Black Hole" and "MK Ultra". I was absolutely thrilled when they went on to play "Map of the Problematique" next as it is one of my favourite songs and they had not played it at the Wembley gig the evening before. "Bliss" and "Guiding Light" followed and then, to my utter delight, they played "Hysteria" preceded by the full version of "Interlude".

I won't list all of the songs that followed but my highlights were their cover of the Leslie Bricusse and Anthony Newley classic "Feeling Good"; the platform lifting away from the stage and carrying the band into the air during "Undisclosed Desires"; and their cover of the old Animals classic "House of the Rising Sun" which lead into my very favourite Muse song "Time Is Running Out". 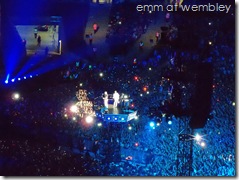 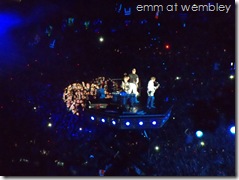 During their first encore, the bank played “Exogenesis: Symphony Part 1 (Overture)” and a giant, inflatable UFO came from around the back of the stage and floated across the stadium.  That was incredible and mind-blowing enough but then a trapeze artist dropped out of the balloon and began to perform acrobatics in the air.  It was fabulous to see!  They played “Stockholm Syndrome” too in that encore and disappeared off the stage again. 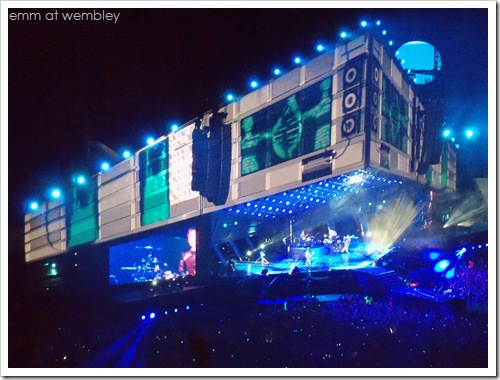 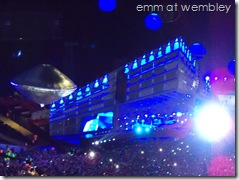 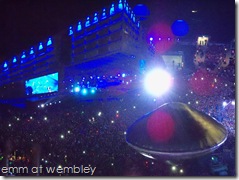 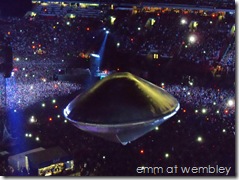 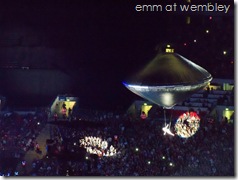 I have to say, I was pretty confident that they would return for a second encore and was thrilled when they returned with “Take a Bow”, “Plug In Baby” and “Knights of Cydonia”.  All too soon, it was over and all we were left with was a feeling of exhilaration and scores of white orbs that descended over the crowd.  Seeing Muse at Wembley was honestly one of the best experiences of my life!  The only complaint I have about the whole of Muse’s set was that they didn’t play “New Born” (which they played the night before) but I do think hearing “Map of the Problematique” was an acceptable trade. 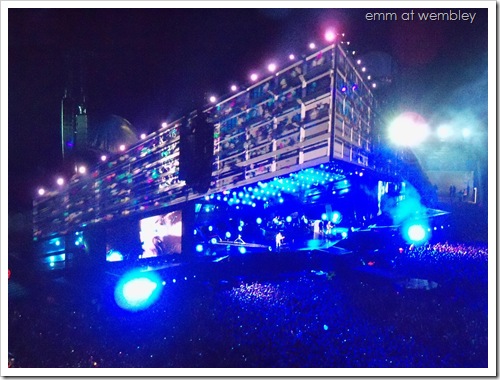 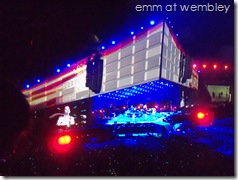 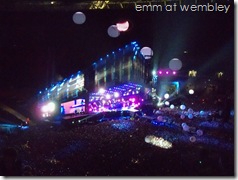