Blood Brothers at the Phoenix Theatre 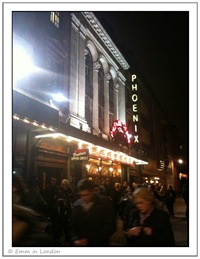 Blood Brothers is Willy Russell’s masterpiece and is currently in its twenty-third year at the Phoenix Theatre in London’s West End.  It is a touching yet hilarious musical set in Liverpool from the early 50s to the late 70s.  I had seen the play in Liverpool in 1996 and had always wanted to see it again.  After a run of disappointing outings to West End musicals, I finally decided to head for a play that I knew wouldn’t disappoint me.

Opening with the line “So did y’hear the story of the Johnstone twins?”, Blood Brothers tells the tale of two brothers born of the same mother but separated at birth.  Mrs Johnstone is a working class woman who has five children by the age of twenty-five.  Destitute and abandoned by her husband, the pregnant Mrs Johnstone discovers that she is expecting twins and confides in her employer in a moment of desperation.  The scheming (and barren) Mrs Lyons suggests to Mrs Johnstone that she doesn’t need two more mouths to feed and she convinces her servant to give up one of her babies.  The deal is sealed when Mrs Lyons makes Mrs Johnstone swear on the Bible that she will uphold their deal. 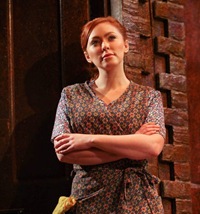 All too soon after the birth, Mrs Johnstone realises her mistake but Mrs Lyons reminds her of her promise and takes one of the babies, leaving her with Mickey.  Insecure and jealous of Mrs Johnstone, Mrs Lyons eventually terminates her employment in order to keep her away from ‘her’ baby Edward.  She warns the suspicious Mrs Johnstone of an old wives tale (which she has conveniently fabricated) that if twins are ever separated, then they must never know of their sibling status, for if they ever discover the truth then both of them shall die on that very day.

Despite the  intentions and scheming of the mothers, Mickey and Eddie meet at the age of seven and begin a friendship that will span the next twenty years.

Natasha Hamilton of girl band Atomic Kitten has landed the coveted role of Mrs Johnstone and this is her first theatre role.  With her powerful voice and convincing 50s and 60s style, I had no idea that she was a theatre novice and thoroughly enjoyed her performance.  Vivienne Carlyle played Mrs Lyons and Louise Clayton played Linda, the girl that starts off as Mickey’s best friend and ultimate comes between the brothers. 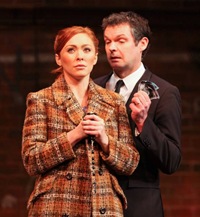 Special mention goes to Stephen Palfreman and Simon Willmont as Mickey and Eddie.  My favourite part of the play is the first act where Mickey and Eddie meet as seven-year-olds and all the children of the neighbourhood play in the street.  It is played out by the adult cast and was absolutely delightful in this performance.

My favourite actor in this performance was Philip Stewart as the narrator.  As narrator he is the voice of fate, warning of the tragedy to come and Philip gave a chilling and powerful performance. 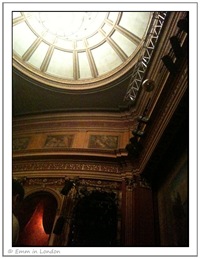 I could not fault this production of Blood Brothers and enjoyed each aspect of it.  The stage design and props went a long way to representing the changing face of Liverpool in the 50s, 60s and 70s and the costumes were lovely.   As a play, Blood Brothers captures the innocence and naivety of childhood as well as the silliness and the games children play.  It is an uplifting and enjoyable play and I would absolutely recommend it.