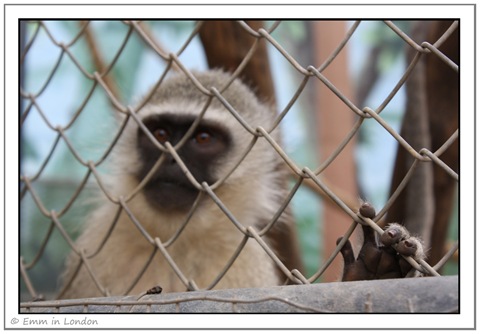 This photo epitomises everything I don’t like about zoos.  Monkeys should barely know what barbed wire feels like, never mind be left grasping it in boredom and captivity.  I thought I’d post this photo separately, along with my negative sentiments, because I did go to an “animal world” with my god daughter in South Africa and wouldn’t want to ruin the entire post with my whining.

I liked this photo because it came out exactly as I wanted it to.  I wanted to focus on the monkey’s little hand and I had taken it with this exact sentiment in mind.

I also like that I resisted the urge to touch the monkey’s hand.  As cute as they look, they are more vicious than you can ever imagine and I would not have fingers with which to type had I given in to temptation.

Not to mention that wild animals and monkeys should not be subjected to the random touch of inquisitive humans.  The only time that has felt right is when I’ve been in animal rehabilitation, conservation or breeding centres.