On Monday evening, we headed down to Heaven in the Arches under Charing Cross Station.  There isn’t much that would get me to a dive of a club on a Monday evening but seeing Does It Offend You, Yeah? perform live would.  Once inside, we got a spot right near the front and prepared ourselves for an evening of mayhem as DIOYY are known for their chaotic live gigs. 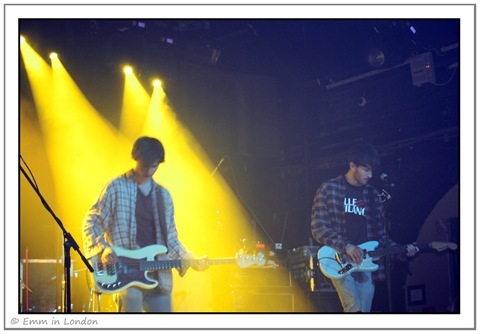 Tripwires were the first support band.  The club had taken quite a while to fill up and I correctly predicted that they would start the support bands late.  Tripwires sounded a bit like Suede and the Britpop bands of the mid-nineties with endless reverberating guitars and the deepest possible basslines.

I really wanted to like them but their guitars drowned out their vocals. It sounded like the sound levels were all wrong and the instruments were competing for prominence but the free track on their website sounds the same. 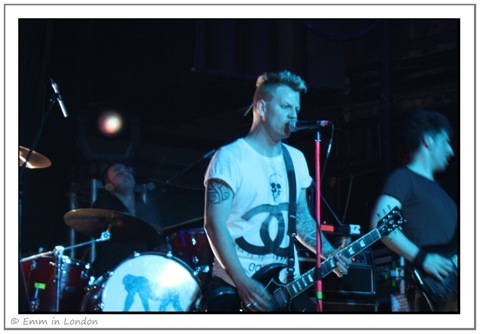 Hounds were up next. This four-piece from Essex were really energetic and ripped up the stage.  They have a pretty heavy sound and like DIOYY, they make use of samples and mac-effects in amongst thrashing drums and guitars.  They reminded me a lot of The Prodigy at their loudest.

Hounds were really entertaining too. In the middle of their set, the vocalist explained that they’d been supporting DIOYY across their many gigs in the UK and they knew who it was the crowd wanted to see.  Just once, he said, he wanted to hear the crowd go wild just for them and so he whipped up the crowd into a frenzy as we cheered on their next track. 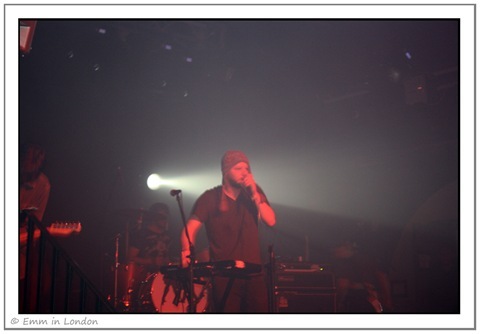 Canned frenzy or not, it is clear that everyone was there to see the main act, Does It Offend You, Yeah?  The last time I saw them was at Exit Festival in 2010 and I was looking forward to hearing some of the brand new tracks from their new album Don't Say We Didn't Warn You.

The moment finally arrived and the band burst onto stage.  They launched straight into “Wrestler” which is one of my favourite tracks on their new album and followed up with “With A Heavy Heart (I Regret To Inform You)”.  Lead singer James Rushent asked which fans had been around since the beginning (which elicited a big whoop from me) and they played their first ever recording “Battle Royale” featuring the sublime guitar solo from Matty Derham.

The next three tracks are amongst my favourite DIOYY tracks and the crowd went crazy.  First up was “We Are The Dead”, the first download released from their new album plus my old favourites “Attack Of The 60ft Lesbian Octopus” and “Weird Science”. 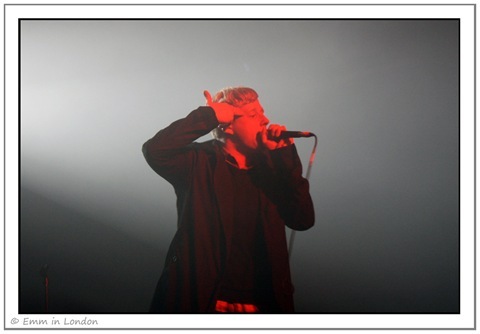 The band were then joined on stage by rapper Trip to perform on their track “Wondering”.  It was a great opportunity to see him perform with the band and he gave a great performance.

I love the photo above.  If you click on it for an enlargement, you can see all of the bands members, including Trip, grinning away.  It is possible that this was taken when James Rushent was grilling the crowd on whether they had illegally downloaded the new album.  Not many people admitted to doing so which is strange when you consider how many users were commenting about it on Last.fm after it leaked.

Next up was “Survival of the Thickest” the iTunes-exclusive bonus track from their new album.  It is a great track that reminds me of the classic Space Invaders game.  It was around this time that the band were informed that they needed to get off stage shortly.  James Rushent put the blame on the previous bands not being ready on time but we all knew they were due to appear on Radio 1 at 10pm anyway.  They seemed to rush through the next three tracks which were old favourites from their first album, “Let’s Make Out”, “Dawn of the Dead” and “We Are Rockstars”.

The band then disappeared off stage, reappearing for the obligatory encore after the crowd bayed for more.  They played a raucous version of “The Monkeys Are Coming” and then, just like that, they were gone.

I really enjoyed the show and I loved every single track that they played.  I know they couldn’t have played for too much longer as curfew was at 10.30pm but I was hoping to hear far more tracks from their new album.  I guess that settles it then: I’m going to have to see them in concert again, and soon!