The Shard: A Year in Photos

When construction first began on The Shard back in 2009, it seemed like 2012 was a long, long way away.  It has been just over a year since The Shard first began peeking out over rooftops in the London Bridge area and a full year since I started taking photos.  So, without further ado, I present you a year of photos of The Shard.  Click on any of the photos for an enlargement. 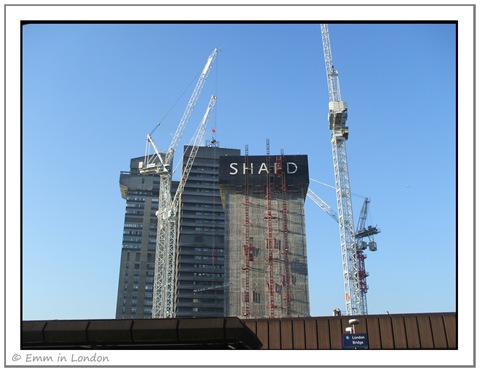 In March 2010, the building was about 18 levels high.  All that we could see was the central core and while there was a framework around the bottom 7 levels or so, there was not much to see down there yet. 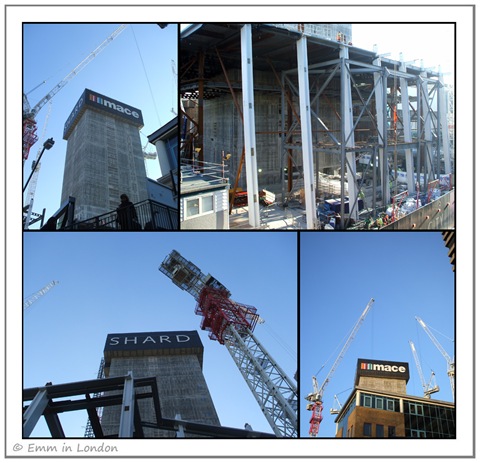 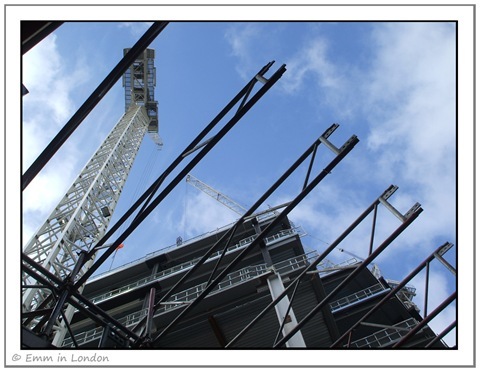 By April 2010, The Shard began to dominate the sky as you walked out of London Bridge Station forecourt.  In just one month, they had made incredible progress and the framework for the lower levels and lobby seemed to be complete, as was the framework for the first three concrete floors.  The core had reached about 20 levels (it is difficult to see how much more has been built under the Mace banner). 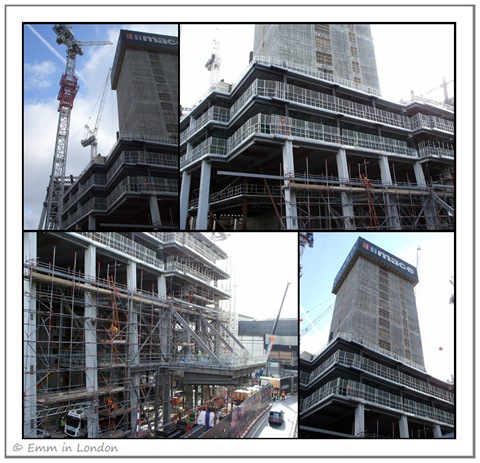 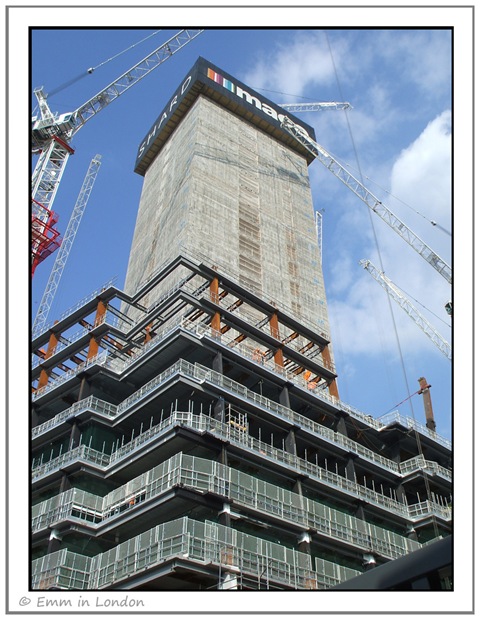 In just three weeks from April 30 to May 20, 2010, the core had shot up 7 levels to 27 levels.  Work on the concrete floors (which I increasingly began to view as either a ‘skirt’ or cake layers) continued to five floors. 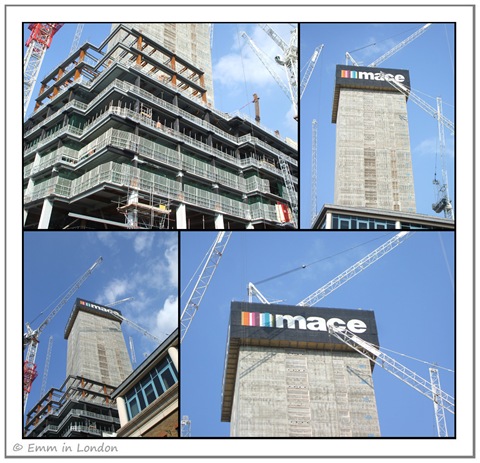 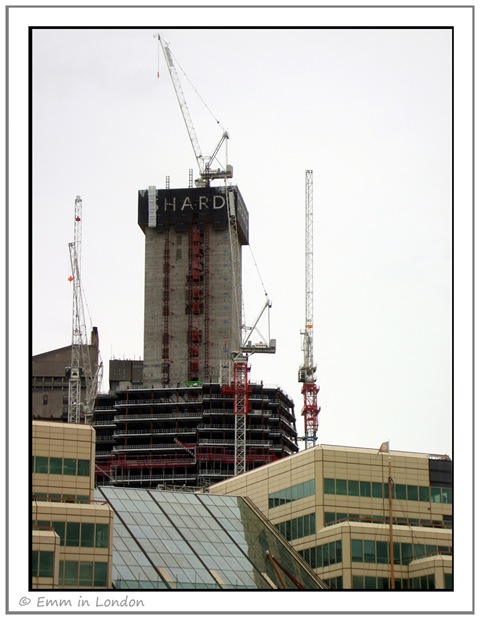 For a period of time, there didn’t appear to be any discernible difference in the progress of The Shard, but over the summer of 2010, the core rose to 37 levels and the outer layers really did begin to look like the skirt of a flamenco dress with all of that red and black.  If you look at the photo below-right, you will also see that the building began to extend slightly to the east. 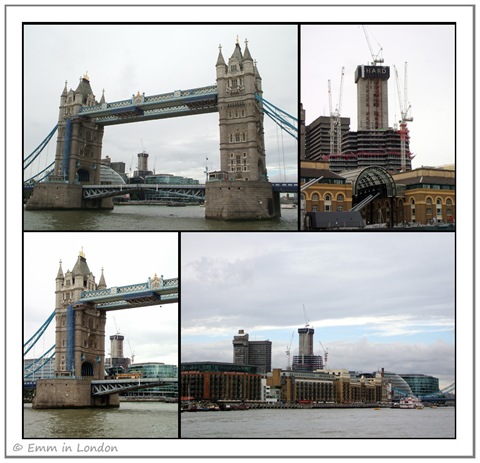 The glass work began to be visible above the tops of buildings later in the year and the bottom levels were lit up to look like a Christmas tree.  I wish I had taken a photo of that but was far too cold and miserable to be taking out my camera! 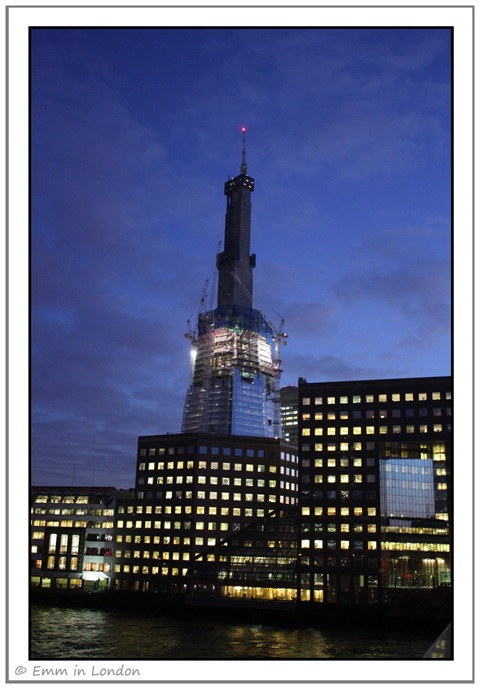 By January 2011, The Shard had begun to dominate the London skyline.  The core had reached its highest level at level 72 and the concrete floors had reached to about level 44.  The glass cladding had reached about level 35. 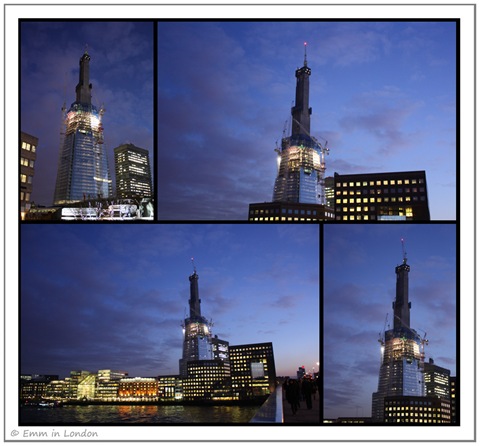 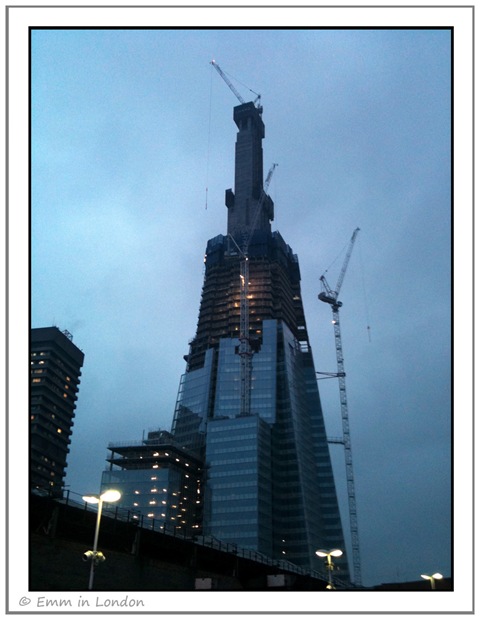 The concrete floors reached level 46 by the end of February and the glass cladding continued to be completed around the building.  Attention was given to the extended blocks to the east of the building. 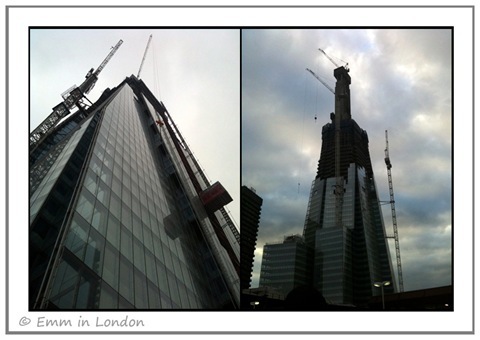 By the end of March 2011, the concrete floors had reached level 50 and the cladding was complete to level 38.  The work on the extended blocks was mostly completed and I imagine it will simply be onwards and upwards now until the building is completed.

I certainly cannot wait until the observation deck is complete and look forward to one final year of Shard watching.  The Shard is currently the tallest building in London and the United Kingdom and exceeded One Canada Square in late November 2010.