Closer Than Ever or A Million Miles From Home?

As an expat, people often ask me whether I get homesick or miss the people back home in South Africa.  I often tell them that I don’t really, because platforms like Facebook and Twitter make it feel as though we have simply carried on chatting everyday, and I still get to share in births, engagement parties, dinner parties and annual holidays.  I tend to go home for the weddings!

To mark their 100th birthday, Nivea have commissioned psychologist Professor Geoff Beattie to conduct research into how social media affects levels of closeness in Britain.  It is an interesting study and they hypothesise that far from encouraging shallow and meaningless relationships, the relative anonymity of the Internet encourages us to share more with others and therefore, we become closer.

So when I see photos of my friends on Facebook, it is as good as catching up over a cup of tea and because the Internet encourages me to share more about myself, I become closer with the people I interact with.  When friends ‘like’ or comment on something I post, they are responding to me which in turn fosters positive regard and mutual understanding.

Having been somewhat interested in social research in university, I certainly can see where they’re going with this but I initial reaction was “yes, but…” 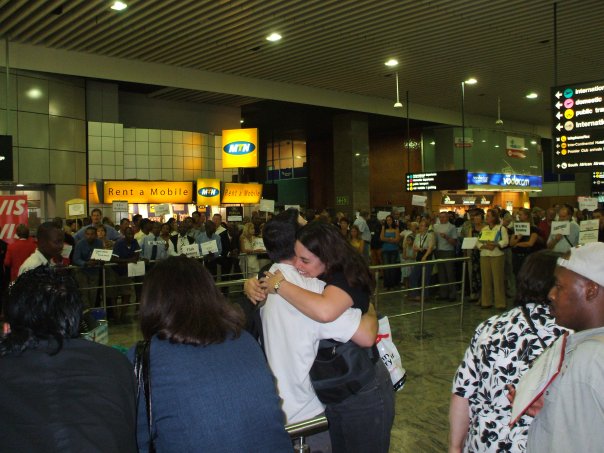 It all immediately made me think of this photo.  This was taken at OR Tambo airport in Johannesburg in March 2007.  My brother has been living in England for a year and was returning home for a holiday.  That gleeful person there hugging him is me.  I was overjoyed to see him and more importantly, to actually see him in person.

No matter how much we share online and how we connect with each other, nothing can beat being with people in person.  We’re human beings which means we’re basically intelligent animals.  We need to be with people, to hear their voices and to touch them.  It is not just family either.  I try as hard as I can to email my friends back home but fifteen minutes spent watching the sun set in Johannesburg in December meant more to us than two whole years spent emailing and following each other on Facebook.

Perhaps it is simple as discarding our cynicism and doubts and appreciating every single bit of intimacy and friendship we can get, no matter what the source?  It might not be as good as seeing them in person, but as an expat, I would be lost with Facebook, Twitter, email and this blog.