The Scottish Town of Pitlochry 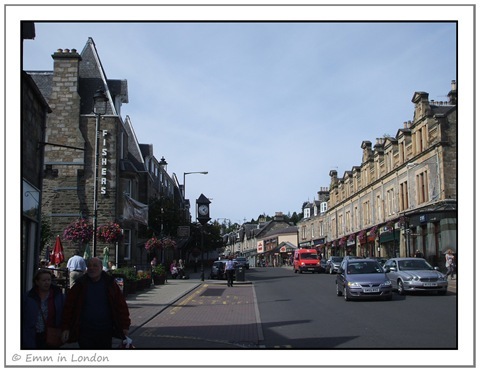 On the third day of our trip to Scotland last year, we headed up to the beautiful town of Pitlochry.  As you enter Pitlochry and drive past the Bells distillery, you can’t help but notice how beautiful it is up there.  No matter which direction you look in, there is always a glimpse of the Highlands in the corner of your eye.  Pitlochry has a distinctive style of architecture (the Scots Baronial Style) and we were treated to many rounded turrets and gothic looking façades. 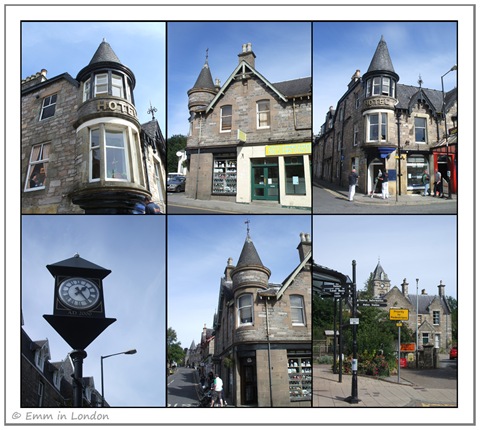 It is safe to say that I loved the architecture and scenery so much in Pitlochry that I went a bit crazy with the photographs.  I’d love to put up each and every photo individually and wax on about how beautiful it is up there but I’ll spare you.  Click on any of the images for an enlargement. 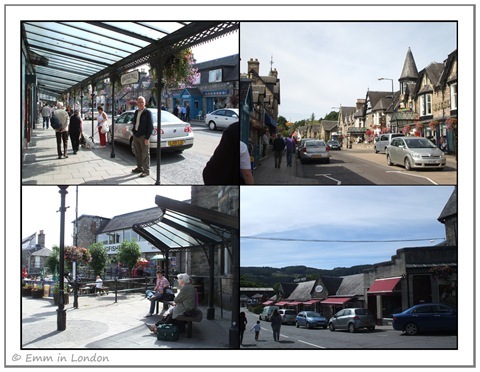 Pitlochry is less than an hour’s drive away from where we were staying at Loch Monzievaird near Crieff and it is one of the most beautiful drives I have ever been on.  Our main reason for driving this way was so that we could visit the Heathergems Visitor Centre and Factory Outlet Shop. 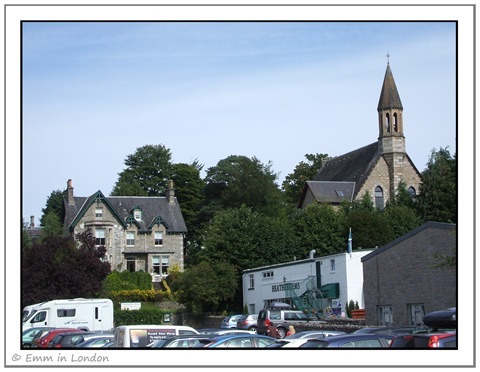 Above the Heathergems outlet you can see the old Pitlochry East Church which has since been converted into nine swanky apartments and is now known as John Stewart Court.  John Stewart was a famous visionary and Pitlochry resident, known for establishing Pitlochry Festival Theatre which still runs today. 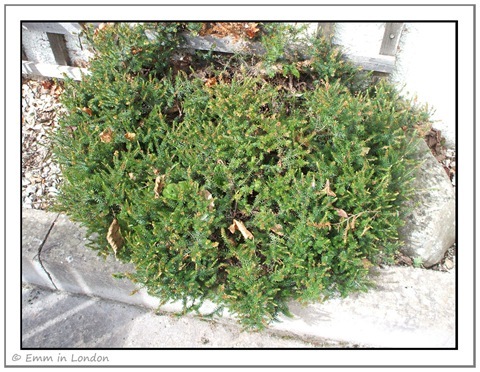 Heather (Calluna vulgaris) grows all over the hills and highlands of Scotland.  It has a limited lifespan though and after a couple of years, the heather becomes woody and has little nutritional value to grouse or other animals.  This is what the people from Heathergems harvest and by doing so, they enable new heather to grow and the land to become fertile again. 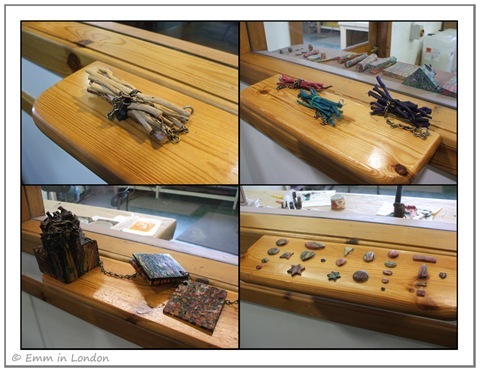 They collect, cut and clean the heather and then dye it with natural dyes.  Red, green, purple and yellow dye are primarily used.  The heather is then compressed into big blocks which are cut into slices.  Shapes are cut out of the slices which are then polished and lacquered to produce the most colourful and beautiful jewellery. 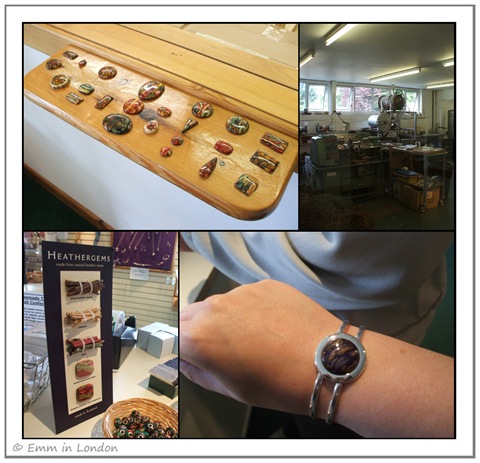 The jewellery and accessories are surprisingly affordable, considering the skill and artistry that goes into making them.  You can see the whole collection of their products at the Heathergems online shop.

After Heathergems, we relaxed for a while in Victoria’s Restaurant and Coffee Shop.  The most intriguing aspect of this restaurant is that they elevate the drinking of tea to a form of art and they had a huge variety of speciality teas.  I somehow managed to restrain myself from stealing one of their menus but the quote on the back of the menu above reads, “Strange how a teapot can represent at the same time, the comforts of solitude and the pleasure of company”. 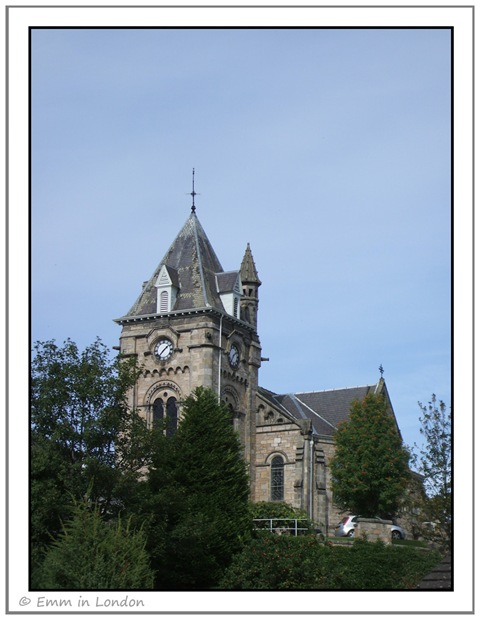 Pitlochry is a beautiful old Victorian town and I can see why it was such a popular tourist destination in the Victorian age.  We only spent a day there but I could easily imagine spending a whole week there, going on long walks in the surrounding hills and browsing in the speciality shops. 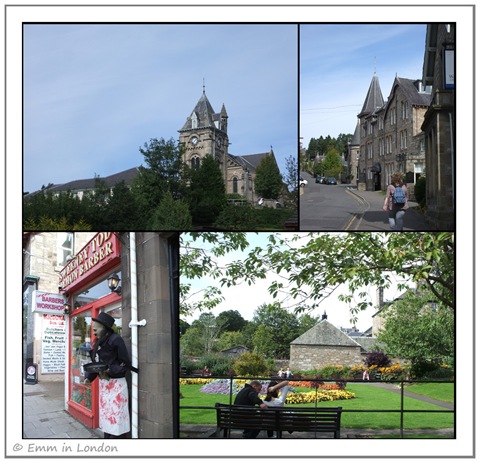 Out of all the towns we visited in Scotland, Pitlochry was my favourite.  If you do visit, be sure to look out for the Sweeney Todd barbershop in the photo above.  (You just have to love the Scottish sense of humour).  The barbershop is next to a butchers where I bought the best Scotch pie I have ever tasted in my life.  Yum. 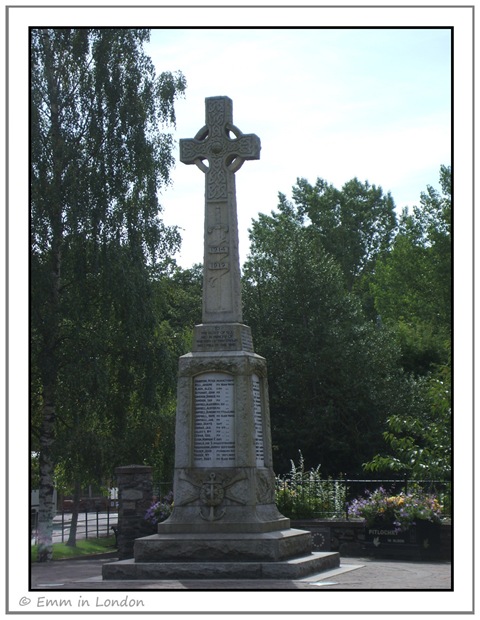