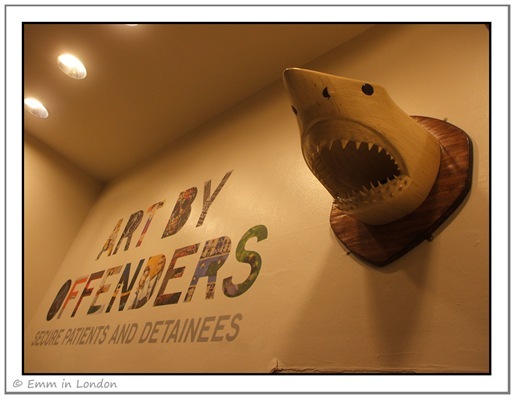 A couple of weeks ago, I visited Jenny Woolf’s blog An English Travel Writer and I saw that she had been to a fascinating exhibition at the Royal Festival Hall on the Southbank.  The exhibition was called Art by Offenders, Secure Patients and Detainees and it is run by the Koestler Trust, the body that awards, exhibits and sells the artwork of offenders, detainees and secure patients in the UK.

Jenny mentioned that the exhibition was in its final days (it closed on Sunday) and I knew I just had to visit it myself.

In a word, I was amazed by what I saw.  The level of talent, expression and emotion expressed in these works of art was incredible and I was really touched.

The work above was created using matchsticks and it must have taking extreme patience, focus and time to complete.  Lots of time. This is not the type of exhibition that you rush around, that is for sure.  The pieces just seem to draw you in, to demand that you consider them, look at them and think about them. For instance, in Know Your Enemy, the artist commented on the fact that society judges and pigeon-holes people based on appearances or circumstances which causes alienation and marginalisation.  But we mustn’t jump to conclusions as maybe this character is not the enemy after all. 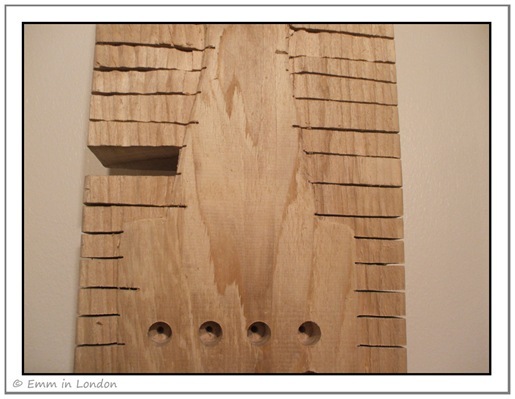 This piece of work really impressed me and the strangest thing is that I was going to walk past it when it pulled me back.  I realised that the brush on the left (see above) was the finished product, the person who grew up, completed their rites of passage.  And the unfinished work represented the person who fell into crime, drugs or gangs at a young age.  I totally got that.  So many of the people I have spoken to who have overcome those early experiences feel that there were so many areas of their life that were left unfinished, so many things they had to learn about the most basic things when they entered back into the mainstream.  This artist has left prison now, having completed A-level art in prison, and is now completing an art degree.

The work above was quite interesting and I tried to get a close up of the detail (you can click on the photo for a better look).  The man on the far left has “I’m not a number” written on his shirt and the prison is called HMP Mazed.  I love the play on words and the depiction of the prison as a maze.  This painting won the James Wood Q.C. Platinum Award and was submitted for the theme ‘Help’. 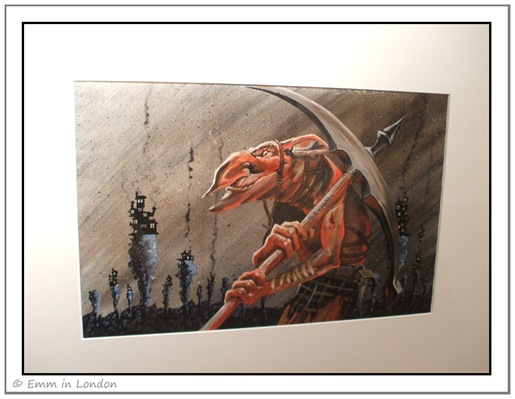 The image above caught my eye not only because of the unusual scene that it depicts but also because of the artists’ sense of humour in the title that he chose.   It occurred to me that spending time in a prison a million miles away from home must be incredibly difficult and I wonder whether he needs to hold on to his identity as an English football fan.

The detail on this piece was incredible and much of this piece was done in pen on paper.  It had been torn in places and it was quite sad as although framed, putting it behind glass would have detracted from it, so I feel it is a fragile piece of work.  As the curator remarked, it is as though the artist poured his emotions out of his head and into his hand. 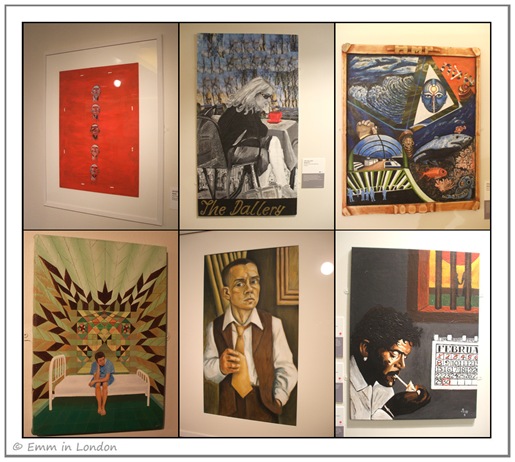 I found many of the images above quite powerful.  In The Dallery, the woman’s sense of isolation and resignation is quite clear, especially when you notice that her eyes are closed beneath her sunglasses.  They Still Wear Suits Like This, Don’t They? was especially powerful and reminded me that individuals often spend upwards of 25 years behind bars only to emerge into a completely different world from the one they left behind. 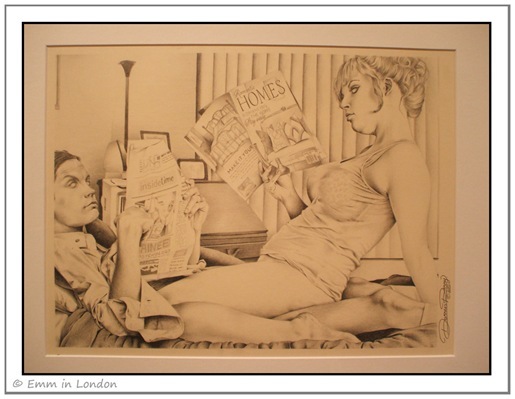 The artist explained that the work above was about how "many prisoners get out and take for granted all the really good things they have". I thought this was quite an important message and wonder how many of us sit through our lives ignoring what is right in front of us. 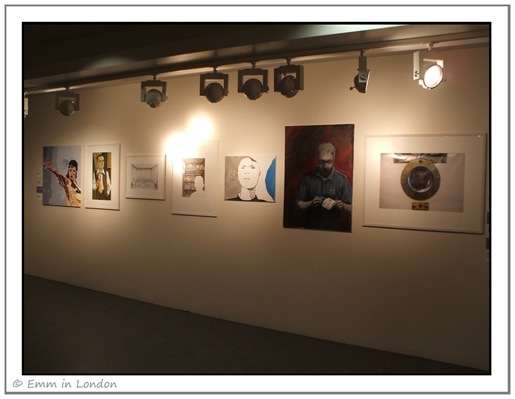 I stood looking at this collection of works for a long time, as did a man next to me. I was particularly taken with the Michael Lester piece, as mentioned above, and also Mukhtak Noor’s Door.  I felt quite strange that we have ‘immigration removal centres’ and it felt a bit like the England of Children of Men, not the civilised country I thought I was moving to.  The man next to me stood looking at U Got Mail for a long time and then remarked to me how powerful that feeling is, receiving a letter in prison. 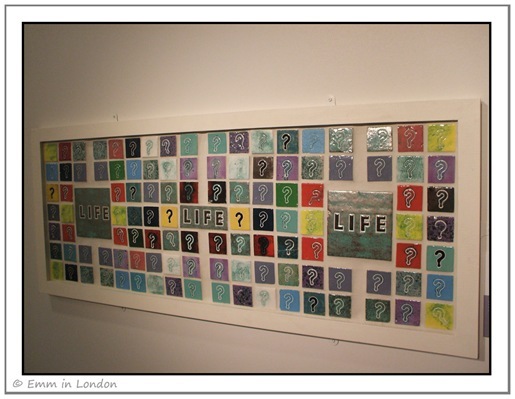 This group work is so simple and yet it raises so many questions.  What is life? What is life in prison? Is that life? A very good piece. 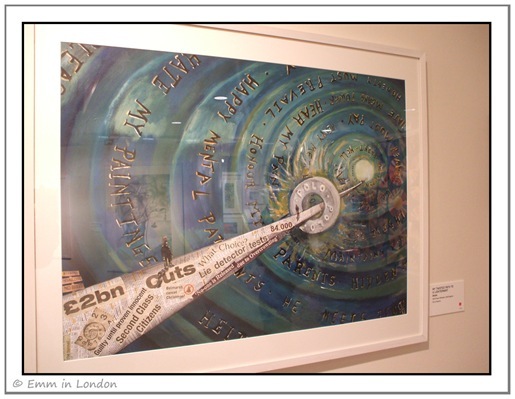 This last piece really impressed me because it was so current and it dealt with so many of the issues that are facing people today.  It cannot be easy to find yourself on the wrong side of the law and to feel that the whole system is against you.  I quite liked the humour in the title of this one too.

Once I finished walking around the exhibition, I wondered outside to the riverside terraces of the Royal Festival Hall.  Everything looked so pretty and festive and I took a moment to admire the London Eye and the lights on the river.  It was to be the last remotely warm evening in an unseasonably warm autumn. 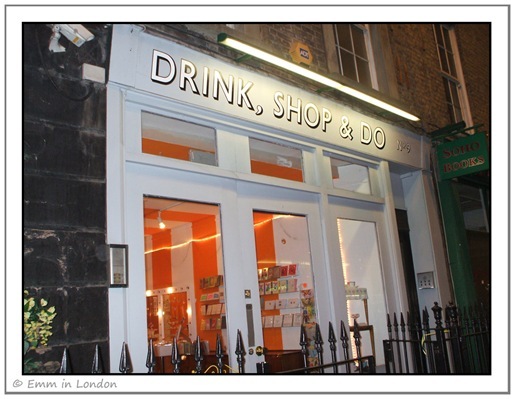 I then headed off to Drink, Shop, Do near King’s Cross Station to attend the re-launch of Richenda Walford’s fabulous site London Remembers.  Richenda’s goal is to visit every single street in London to catalogue all of the memorials, plaques, monuments and statues that the city has to offer.  She has thousands of entries on her site and counting.

It was also amazing that in a city of 7.5 million people, I ran into Melizza from Pincushion Treats.  It is not the first time I have randomly run into people I know in this city!

By the way, Drink, Shop, Do is a fabulous little tea shop that is open until late at night and they served us yummy sandwiches.  I would love to visit there again one day.