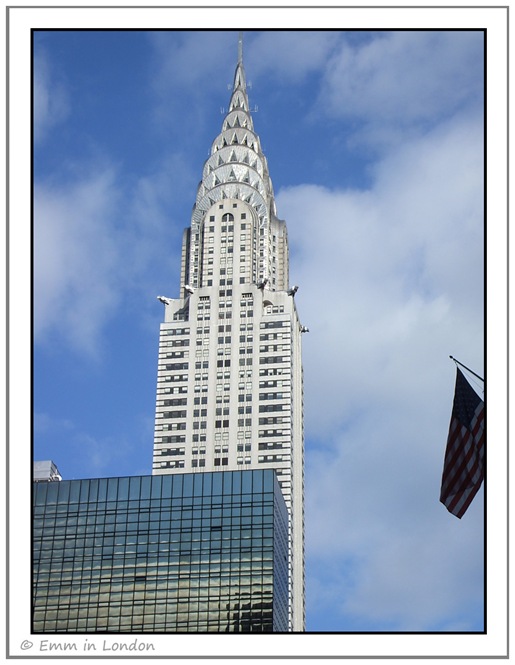 Today’s choice of photo for my Blue Skies and Sunshine series is quite deliberate.  It is the stunning Art Deco Chrysler Building in New York City.  It was once the tallest building in the world before being surpassed by the Empire State Building in 1931 and is currently on a level with The New York Times Building as the third highest in New York City.
It doesn’t really matter how high The Chrysler Building is or what accolades it receives because the fact remains that it is graceful and beautiful, a masterpiece of the Art Deco architectural style that is so prevalent in the city. To me, this building symbolises grace, elegance and understated success.
I took this photo during my visit to New York City in 2009 on one of the few relatively clear and sunny days I had there.  That trip was in itself an achievement for me as I was meant to visit a friend there and that all fell through at the last minute.  I very nearly did not go but ultimately decided to embark on the solo travelling adventure of a lifetime.
And today this building inspires me to reach for my dreams.  I am writing one final exam for the year this week and am one year into the five-year plan that I set last year.  My plan? To become an accountant and work for an international development agency.  It is a rough convergence between where I wanted to be and what I could already do.  Onwards and upwards, as they say!
SHARE:
Posted by Emm in London at 2:53 pm