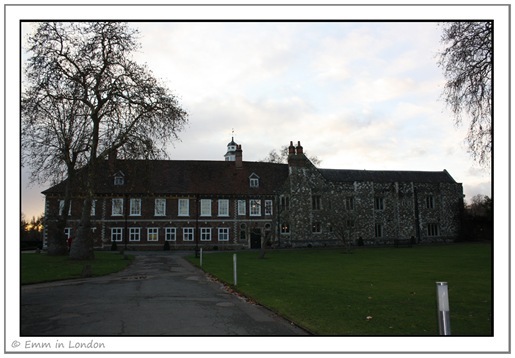 Last week I introduced you to the Tudor and red brick splendour of the Grade I listed Hall Place in Bexley, Kent.  Hall Place is less than three miles from my house and I had often marvelled at the contrast between the 17th century red brick half of the house and the 16th century stone half (which can clearly be seen in the photo above).

In the my previous post, I explained a little bit about the original owner Sir John Champneys and Sir Robert Austen who built the stone and red brick wings respectively.  I also mentioned the exquisite topiary gardens which lie on the banks of the river Cray.

Perhaps the most colourful and notorious resident of Hall Place was Sir Francis Dashwood, a notable rake and member of the notorious Hellfire Club, who purchased the home c. 1772.  His descendant Maitland Dashwood returned to the house in 1870 and undertook a great deal of restorations.  It is assumed that Maitland Dashwood was responsible for much of the wood panelling that can be seen around the house.

In the photo below, you can see the panelling in one of the topiary garden-facing rooms in the newer 17th century wing of the house (above) and also in the parlour which is in the original 16th century wing (below).  The other two photos were taken in the passage between the two wings and show the wooden mock-Tudor finishes. (I’m assuming they would have been added at the time of the extensions and not during the original build).

Remember to click on any of the photos below for enlargements! 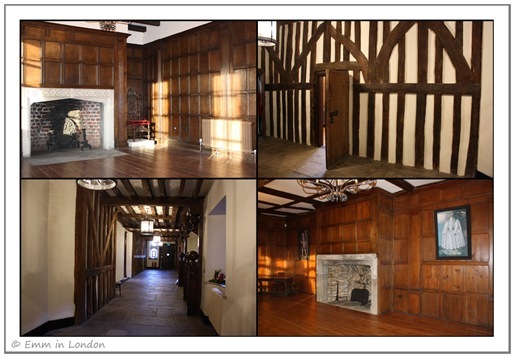 The home remained in the Dashwood family until 1926.  Lady Limerick was the last tenant in the building, before it came under the full control of the Municipal Borough of Bexley at her death in 1943.  Lady Limerick was known for her lavish parties and it is suggested that she lived with a female companion, a fact that might have been scandalous at the time were it not for the high profile figures attending her parties. All is forgiven though as it was Lady Limerick that was responsible for the topiary garden.

Despite a £2-million refurbishment courtesy of the Heritage Lottery Fund, you will note that there is very little furniture in Hall Place.  This is because the bulk of Lady Limerick’s furniture was sold at her death and added to the estate.  The furniture that does remain is authentic and I imagine that more would be added as it is located or restored.  Sadly enough, we were told that a storage facility located nearby was broken into a fortnight ago and several authentic (but not yet restored) items were stolen, including a Victorian bath.

Hall Place was used as a boarding school for much of the 19th century and it certainly had that haunting atmosphere of a former school.  During WWII, it became an important army communications centre for the American forces and went on to become a technical school for girls, then the headquarters of Bexley’s Libraries and Museums service before finally becoming a museum and historical visitor’s centre.

The Chapel at Hall Place

One of the most interesting parts of the visit was the chapel located in the original Tudor wing.  This fascinating display is aimed at children and explains several aspects of Tudor life including the food that they ate, the clothes that they wore, the various positions that people held in society and, importantly, the increasing conflict between the Catholic Church and the Church of England. 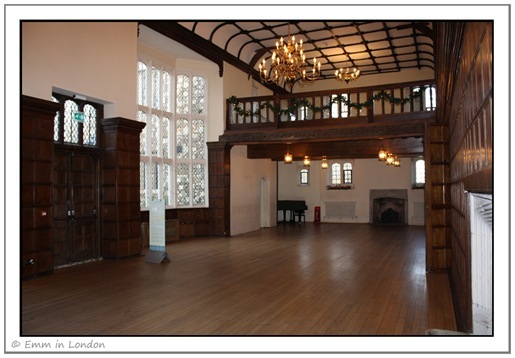 The Great Hall at Hall Place

The Great Hall lies at the heart of Hall Place and was designed for grand feasts and long nights of festivities and entertainment.  Feasts are still held at the Great Hall today, with events such as weddings, Tudor evenings and Christmas dinners.

I was really impressed by the old kitchen, which lies just off to the side of the Great Hall.  There you can see the remains of the old staircase that may have lead up to the Minstrels gallery and you can also see the old ovens.  It is likely that the height of the room would once have been twice as high as it is now.  Unfortunately, my photos simply did not do justice to the old kitchen.  Above, you can also see the view of the Great Hall from the Minstrels Gallery, showing the detail of the wooden finishes in the ceiling. 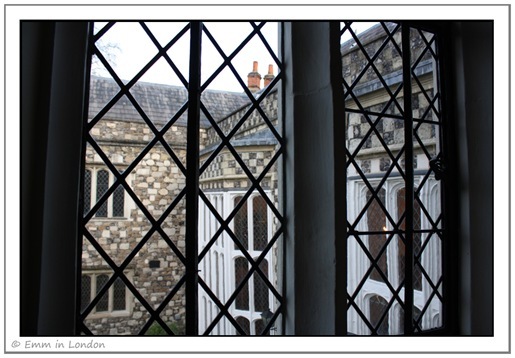 Running along the side of the building, around the Great Hall, were several of the living rooms of the original house.  Amongst these was the Great Chamber and Long Gallery.  I have to admit that without furniture, this room failed to impress me despite the intricate pressed ceiling.  I found far more inspiration staring out of the windows!

The upper floors of the 17th century wing are home to a series of exhibitions relating to WWII and the Victorian period when the home was used as a boarding school.  There was also a Sound and Vision exhibition which I will tell you a bit more about next time.

Thank goodness for the riverside cafe and art gallery to wind down after such a long visit!  It is difficult to believe that there is so much to see here and that it is all for free!  I will definitely return in the summer.  I especially want to photograph each of the heraldic figures of the topiary gardens that represent the Queen’s Beasts.