Events: A Place at the Table and Hidden London

I’ve attended two very different events in the past two days and just wanted to tell you about them before I pass out! I’m strangely tired for the third week of the year but January is always pretty busy for me.

Daedalus Theatre: A Place at the Table 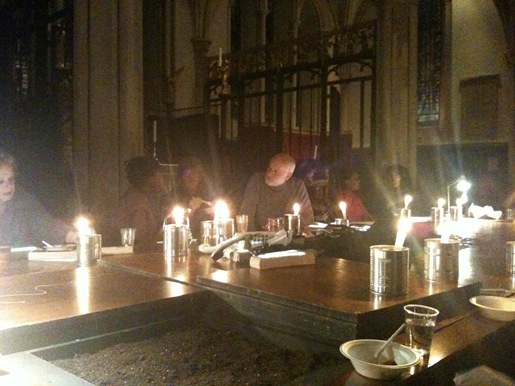 A Place at the Table is a powerful theatrical response to the on-going troubles in Burundi, Rwanda and the African Great Lakes Region. Featuring an all-female cast, predominantly from Central/East Africa, this intimate, immersive production explores the shockwaves from the 1993 assassination of Burundi’s President Melchior Ndadaye backwards through colonialism to ancient legend and forwards to the Rwandan genocide and the continuing conflict in the Democratic Republic of Congo.

You may or may not know that I (try to) do a lot of reading and writing about the genocides in Rwanda and Bosnia.  When the Aegis Trust sent me an email to let me know about this production, I immediately bought tickets and last night, we went along to the Southwark Cathedral to watch it.  I was blown away to discover that despite knowing so much about the 1994 genocide in Rwanda and how the situation there spilled into the DRC, I knew next to nothing about the historical and current situation in Burundi.

The play takes the format of a United Nations Security Council hearing and is supported by original footage and photography.  Eye witness testimony is brought to the table through the technique of verbatim theatre.  Many people have remarked that this technique does what politics and the media fail to do.

This is a powerful and extremely disturbing play but one that is essential viewing for anybody interested in the situation in the Great Lakes region of central Africa.  There will be two more performances at Southwark Cathedral (tickets) this week followed by a performance at Amnesty International’s Human Rights Action Centre on Friday (tickets).


Tonight I went to an event at the London Transport Museum called “Navigating Hidden London”.  It was an interview with David Long, author of Hidden City: The Secret Alleys, Courts and Yards of London’s Square Mile and was conducted by Matt Brown, editor of the Londonist.  If, like me, you are crazy about London’s secret alleys, courts and yards, then you really should get his book.

He gave a wonderful quote which went something like this:

“It is one square mile and at the age of 50, after 30 years in the city, I am still finding new alley ways”.

After hearing David and Matt speak, I have pinpointed the following areas for future exploration:

- Star Court (or was it alley?) to see the Parisian-style pisoire
- The Barbican, especially Chiswell Street and the remains of St Giles

I also met up with Pete from The Londoneer who was very excited as he had spent the afternoon at the Olympic Village.  Look out for photos on his newly re-designed site!