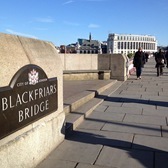 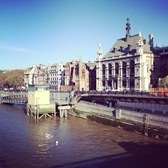 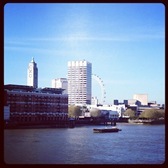 My new walk to work is ever so exciting.  I get off the train a stop early at Waterloo East and then take any of a number of routes across the Thames to our offices near Charing Cross.

On my first morning, I decided to go via Blackfriars Bridge and Cleopatra’s Needle.  I saw such icons of London as the Oxo Tower, a blue police box and a red telephone box, a City of London boundary dragon and a plane flying over the London Eye. 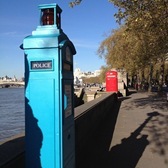 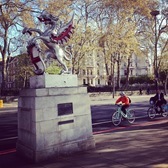 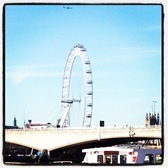 I really was having a grand old time until suddenly, I spotted Cleopatra’s Needle (or more formally, the Obelisk). 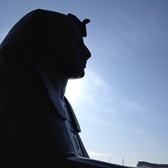 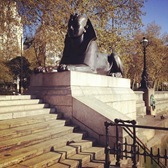 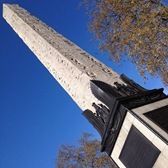 Cleopatra’s Needle is an obelisk from ancient Egypt.  It is one of a trio of obelisks that are erected in the Place de la Concorde in Paris, New York’s Central Park, and, of course, London.  Our obelisk was gifted to London by the ruler of Egypt in 1819.  You can visit Wikipedia to read about the incredible story of the ill-fated transportation of the obelisk from Egypt to London. 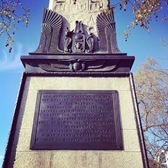 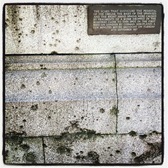 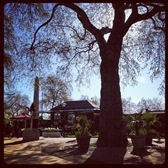 A pair of sphinxes flank the obelisk on either side, making this a lovely little spot in London.  During World War II, a bomb exploded really close to the obelisk and sphinxes and the inscription above centre reads:

“The scars that disfigure the pedestal of the obelisk, the bases of the sphinxes and the right hand sphinx, were caused by fragments of a bomb dropped in the roadway close to this spot, in the first raid on London by German aeroplanes a few minutes before midnight on Tuesday 4th September 1917”.

Once I'd finished my walk, I stopped off at Victoria Embankment Gardens for a little while to sit and relax.

All of these photos were taken using Instagram, my new favourite obsession.  If you have  smart phone, find me on Instagram (my username is mandytjie) or you can see all of my Instagram photos in one place at Tumblr: mandiloop.  Don’t worry, I’m not defecting or leaving this blog (although I do consider moving to Wordpress, often) but I just love the instant, creative and social aspect to Instagram.  It is a social network based on a common love of photography where words are second to the glimpses into other people’s worlds.

Click on the photos for better views.  I’ve installed Lightbox which I quite liked on other people’s blogs.  Please et me know what you think!  Lightbox is the ability to click on one photo in a post and then have them all pop up in one easy to navigate photo album.