Exploring the Cumbrian Town of Hawkshead 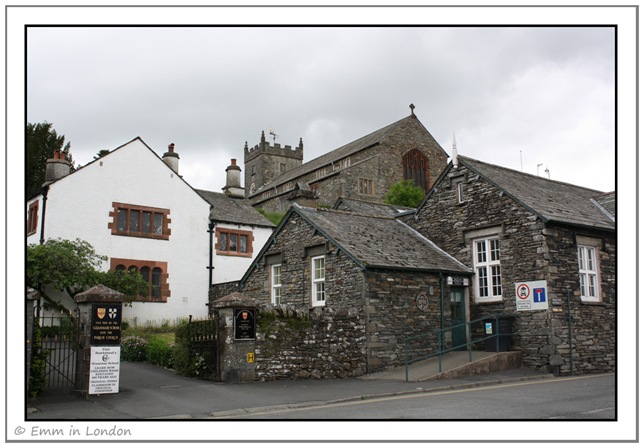 Whenever I’ve spoken to people about my trip to Windermere in Cumbria, I’ve generally noted that there are two types of people: those who haven’t been to Cumbria and want to know where it is, how we got there, where we stayed and what we did and so on, and those who have been who usually just smile, knowingly.  Cumbria has it all and it is one of the most exciting regions that I have visited in Britain.

There is breathtaking scenery, with the exquisite meres stretching out between hills and valleys and views that literally brought tears to my eyes on the first day that we were there.  There are a variety of ways to travel across and around the meres, whether by bus, ferry, car or hiking and there is an array of little towns and villages to discover, each with its own history, culture, food and charm. 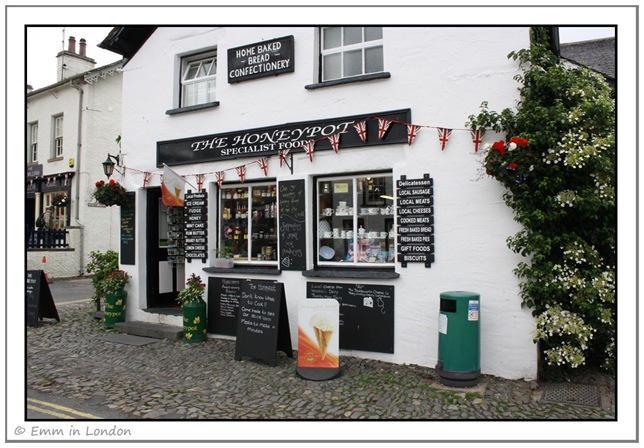 Hawkshead was the first of these magical little villages that we visited during our recent trip to Cumbria.  By the way, Cumbria is situated on the north-western tip of England and is north of Lancashire and Yorkshire and just south of Scotland.   On the day that we visited, I was feeling quite uninspired as it was pretty cold and cloudy on that occasion (in June) so we began our visit with a delicious lunch of soup and homemade bread at the Naturally Hawkshead Cafe inside the Hawkshead store.  Feeling full and slightly more cheerful, we took a stroll around the old town. 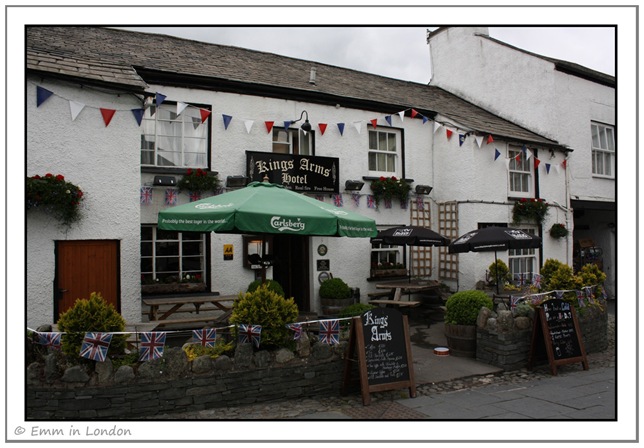 The most impressive aspect of Hawkshead is how well-presented the town is despite being really old.  The Hawkshead Grammar School where poet William Wordsworth attended was built in 1585 and the Minstrels Gallery is a traditional tea-room that dates back to the 15th century.  Hawkshead is older than that though!  I discovered on the Hawkshead website that the town was originally named after a Norse settler Haukr and was first recorded as Houksete in around 1200. 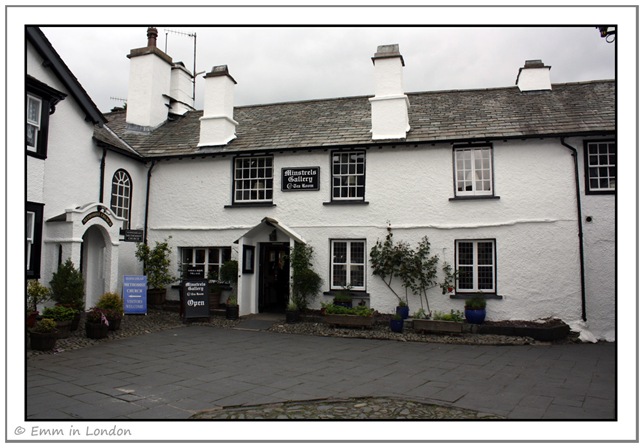 Jubilee fever had swept through the whole of Cumbria and we could see the Union Flag everywhere we looked.  This is such a welcome change to the situation just three years ago when I came back from New York and questioned why we never saw the flag here as often as it is displayed in countries like the USA and South Africa.

I was very amused by the scene below, with the multitude of flags on Flag Street. 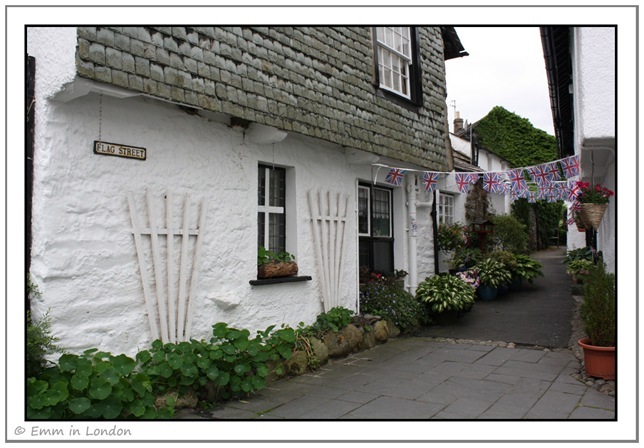 The Honeypot is one of the most famous shops in Hawkshead and it was easy to see why.  They have a section of the most delicious foods and delicacies with fast, friendly and efficient service.  I mention this because the Honeypot is very popular and they are nearly always busy! 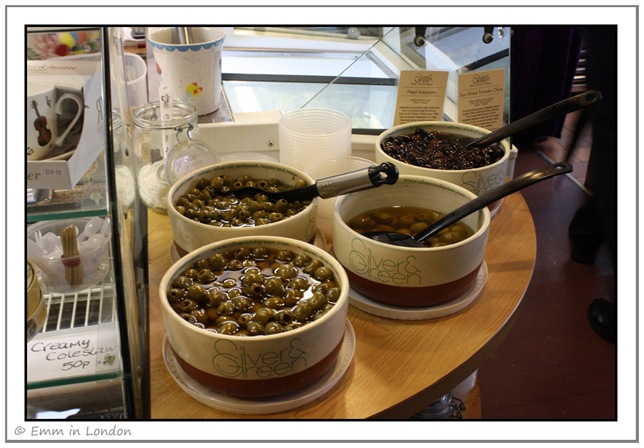 One word of warning: don’t go to The Honeypot with anything but an empty stomach.  To this day I regret not buying more food from them but we did buy a delicious round of cured meat with some olives and local cheese. 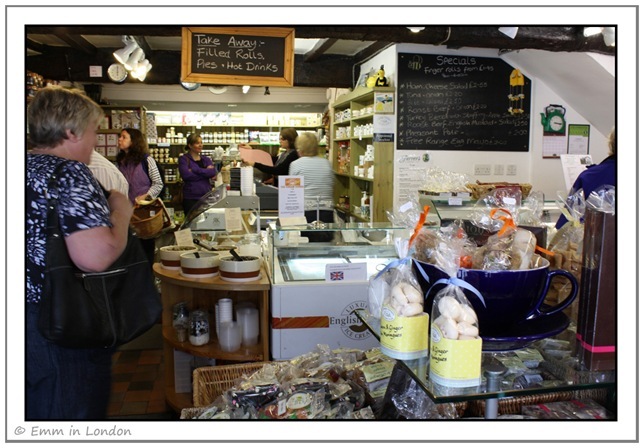 Don’t you just love the giant blue teacup in the photo above?  I could really use one of those on Monday mornings! 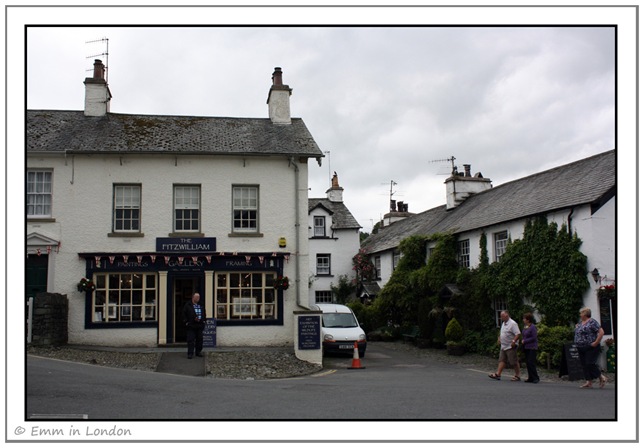 We pottered around a little bit more but I have to admit, I was starting to wonder how much more Hawkshead had to offer.  Quite a lot it turns out. 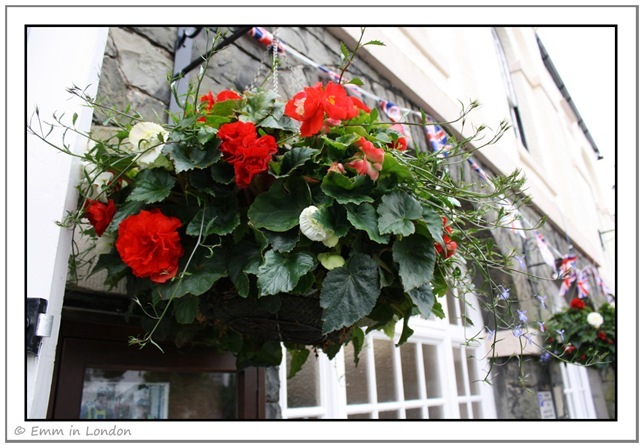 We turned a corner and found that we were behind the Parish church that you could see in the first photo above.  Just at the top of those stairs, we discovered the most incredible views of the village and surrounding areas.  We also got a chance to visit the old Grammar School and to see the desk where William Wordsworth etched his name. 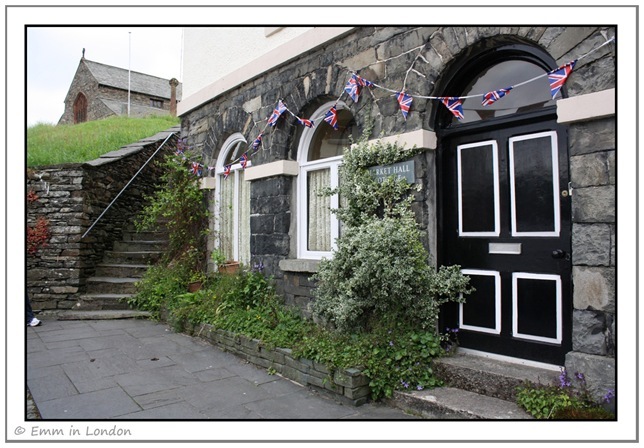 But that is the topic of a whole other post, naturally.