A Visit to the Garden of Tears: Highgate Cemetery 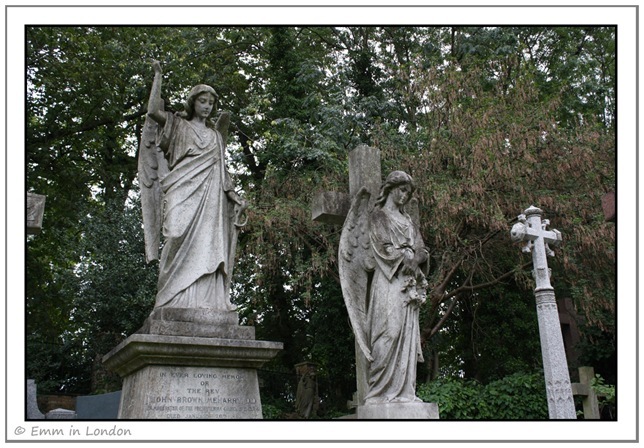 It has been a long time since I’ve been in touch with my inner Goth but yesterday I visited Highgate Cemetery on a cold and rainy summer afternoon.  The rain and shadows, sadness and decay, angels and tears would have made for a very happy Mandy in the mid-1990s, that is for sure.

Highgate Cemetery is split into the West and East cemetery and it lies on either side of Swain Lane in Highgate.  You can only enter the West cemetery as part of a guided tour which costs £7 but you can guide yourself around the East cemetery for £3.  I went with Greg and Mela from Pincushion Treats and we decided to visit the East cemetery on this occasion. 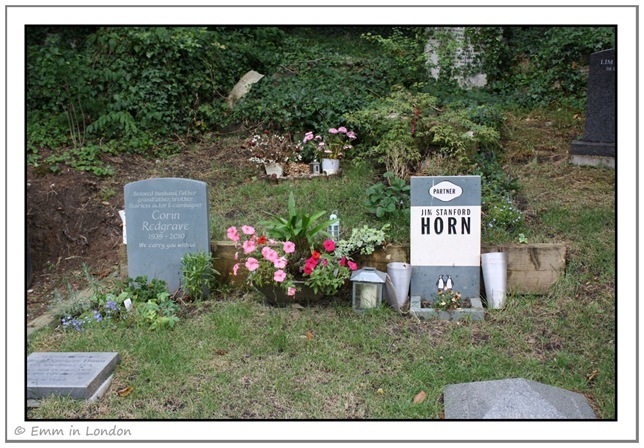 Highgate is a place of contrasts.  There are great mausoleums close to the entrance, so dark and foreboding that you feel almost obliged to divert your eyes away from them.  Perhaps that assists in warding off evil spirits?  There are some interesting and modern gravestones but on the whole, Highgate cemetery feels quite ancient, full of symbolism of death and the afterlife.  There are crosses of al shapes and sizes, of course, but there are also weeping angels, clasped hands and strange Masonic symbols. 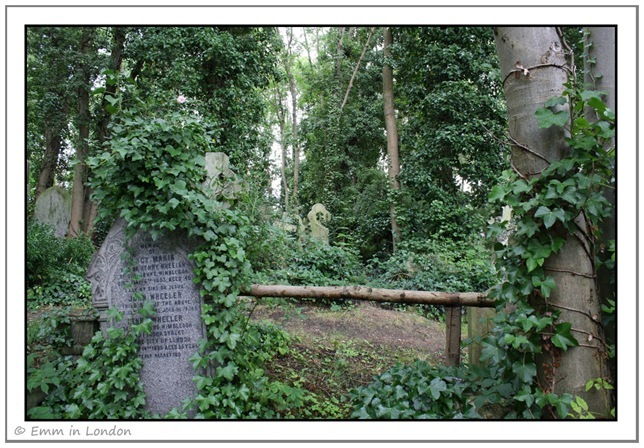 Perhaps most significant is that the cemetery is overrun with ivy and situated beneath towering oak trees.  Oak trees signify strength, honour and longevity while ivy signifies immortality, rebirth and regeneration. 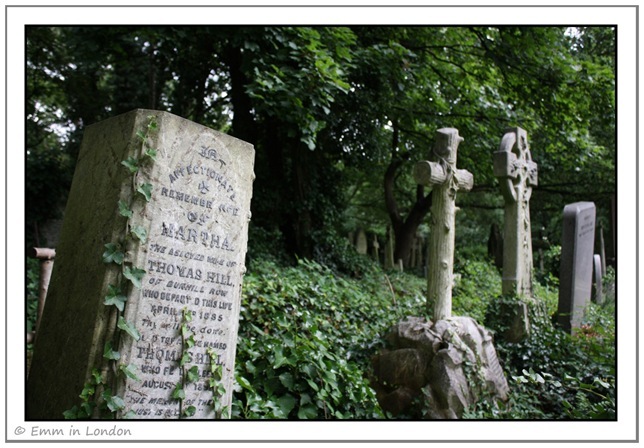 Of course, many cemeteries opt for likenesses of ivy carved into tombstones because as Mela explained to me, Highgate Cemetery is struggling to keep the ivy under control! 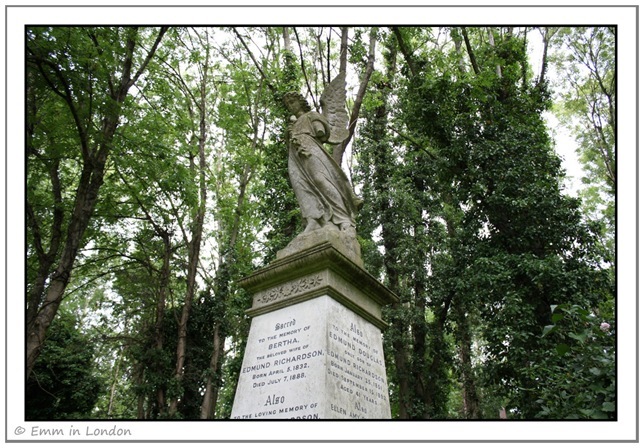 It seems at times that our grief is muted in the modern era.  I always wonder at the depth of emotion that inspired previous generations to erect great statues and monuments to the dead.  The world ceased to spin at that times as communities came together to support the living.  That certainly doesn’t happen now. 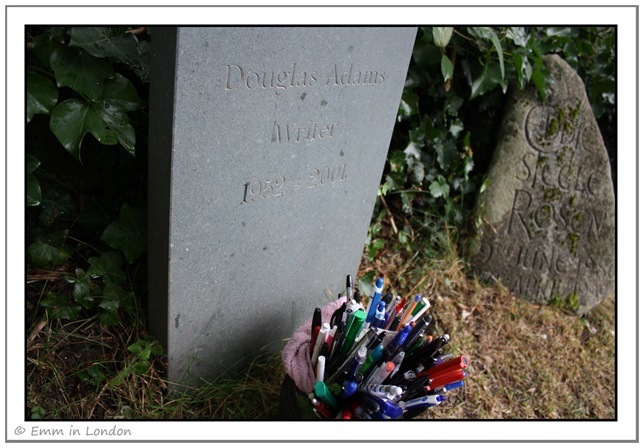 I am so grateful that Greg pointed out the gravestone of Douglas Adams to me as I did not know that his ashes had been buried here.  Adams wrote The Hitchhikers Guide to the Galaxy (a trilogy in five parts) and the Dirk Gently series and if I have to explain to you why there is a towel there, then I’m really not even going to try.  I find it bizarre that he has such a plain gravestone but interestingly enough, I found it almost impossible to take a creative photo of it. 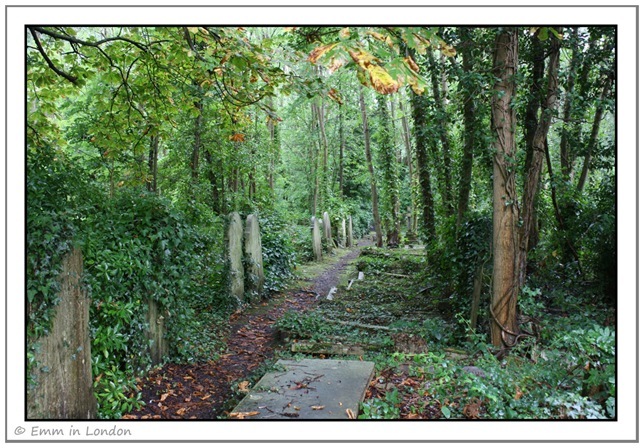 It seems strange that three London residents would go out on a summer’s day with only one umbrella between them but that is exactly what the three of us did!  My umbrella has been mortally wounded by the winds of Windermere and finally gasped its last breaths on Friday evening.  It still doesn’t explain why I didn’t immediately replace it but it does explain how the three of us found ourselves huddled under an umbrella for 15 minutes during a massive cloudburst.  Just as we were beginning to abandon all hope, the rain cleared up and we continued through a very wet and quiet cemetery. 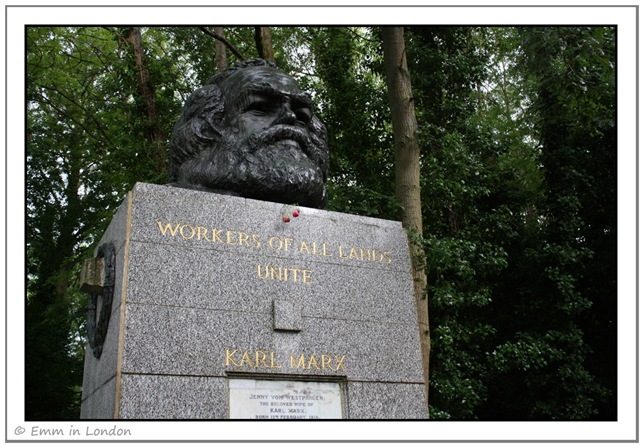 We soon found our way to the grave of Karl Marx.  I read Das Kapital at university (it was a pretty revolutionary time in South African history with the fall of Apartheid and all) but I have to say, I do not think he would have liked his ostentatious tombstone.  He must be turning in his grave! 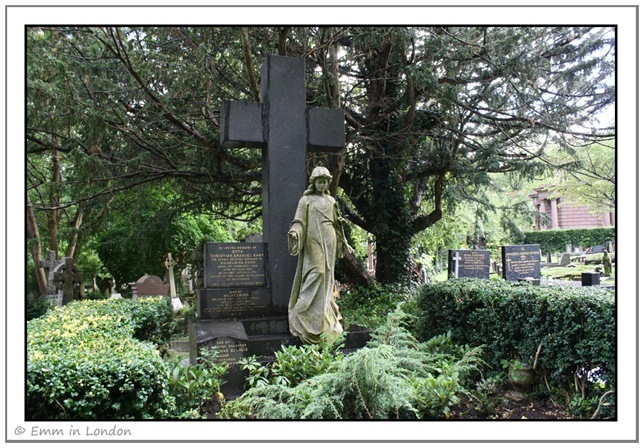 We soon found our way back to the entrance and were quite proud at having braved the rain and cold.  I’d definitely like to visit again and attempt some more creative photography where I’m not shivering or drenched!  In any event, I’d like to go on the tour of the West cemetery.  Perhaps the best part of the experience was relaxing with hot chocolate, chai tea and biscotti in Cafe Nero afterwards! 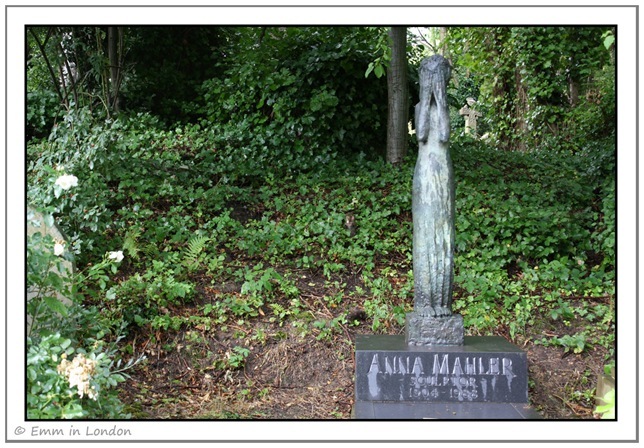