On the Trail of Wenlock and Mandeville

Well, there is no doubt about it, the Olympics coverage on Emm in London was slightly lacking. Part of that was down to an intentional lack of planning. Being married to a sports addict tends to lessen the appeal of sports after a while and I didn't buy any tickets. What I was looking forward to was crowds of tourists and lots of people I could photograph and guide around town but London was eerily quiet during those two weeks.

One aspect of the Olympics that I wholeheartedly embraced was the mascots. I absolutely fell in love with Wenlock and Mandeville and embarked on no less than 3 walking tours in the hopes of tracking them down. On this, the first day of the Paralympic Games, I'm going to take you on a trail of Wenlock and Mandeville. This is the first of two posts and I hope that by the end of it you will share my love for these quirky mascots.

This article gives an excellent background on the concept behind Wenlock and Mandeville. They are truly British mascots and their design is meant to signify two drops of steel from a factory in Bolton. They are named after the town of Much Wenlock in Shropshire where a precursor to the Olympic Games was held in the 19th century and Stoke Mandeville Hospital in Buckinghamshire which held a precursor of the Paralympic Games.

And now for less talk and more mascot-spotting. 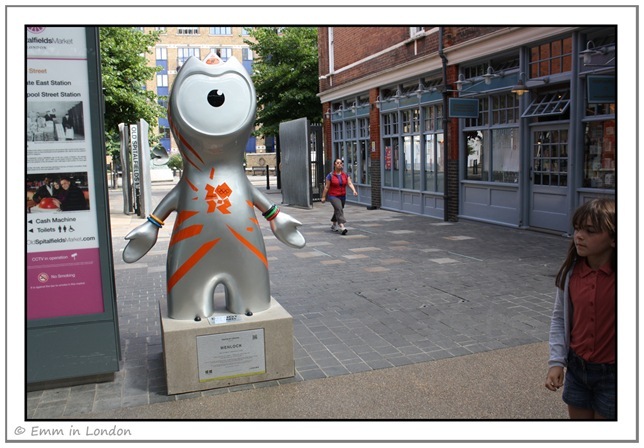 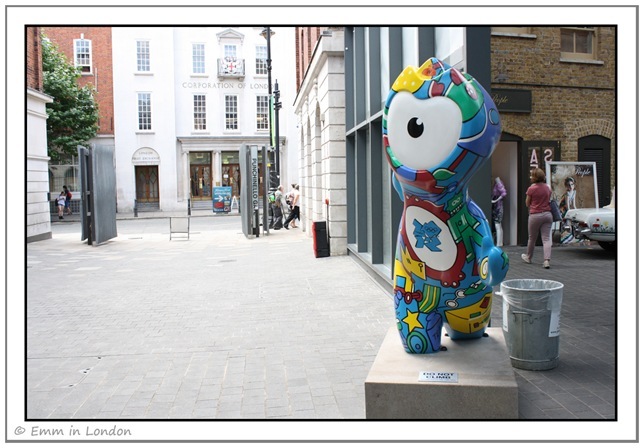 Just inside the market we found Spitalfields Wenlock whose colourful design is meant to represent the variety and rich cultural heritage of the area. You will notice that all Wenlocks have the Olympic rings on their wrists. 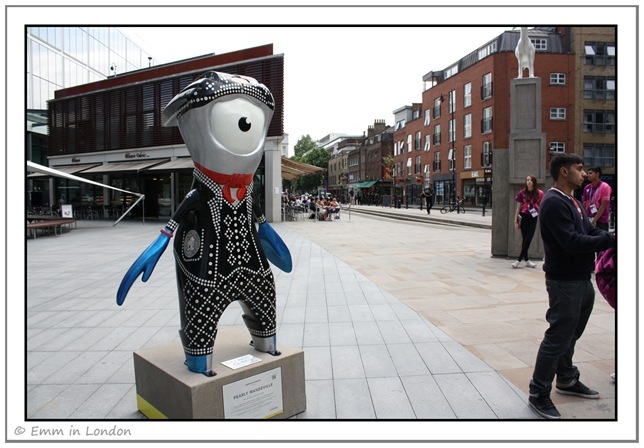 Our first Mandeville was Pearly Mandeville, designed to represent the Pearly Kings and Queens. You might remember that I spotted a real life Pearly King one Sunday morning in Greenwich.

All Mandevilles have a helmet that splits into three tails, often coloured in red, green and blue and it is to represent the symbol of the Paralympics, the Arigato. You can currently see the Arigato suspended from Tower Bridge. 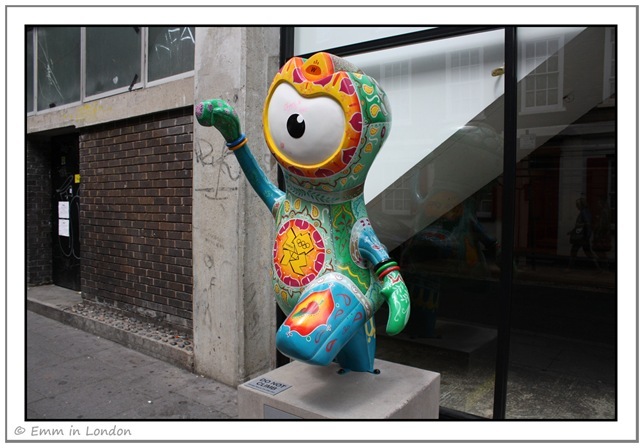 As we made our way off Brick Lane into Hanbury Street, we discovered Spice Wenlock, a colourful young chap meant to represent the Bengali culture in Brick Lane and the numerous curry houses. I really like this one! 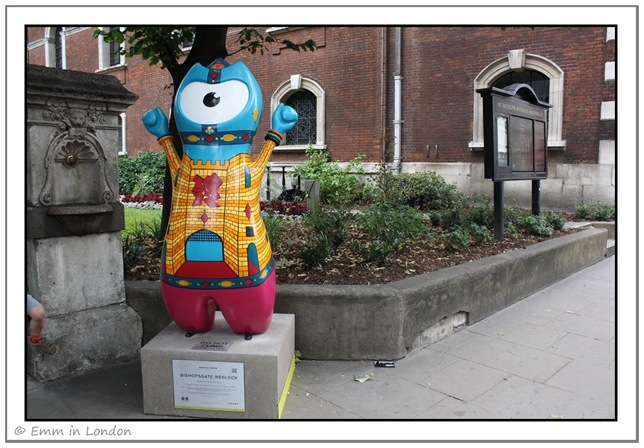 The Bishopsgate Wenlock is kind of special because he welcomes visitors through one of London's original gates through the London Wall. Sadly, London is no longer a walled town and Bishopsgate is now a street best known for some prestigious new skyscrapers going up along it.

That brings us to the end of our first walk. Now I know that I am missing some key Wenlocks and Mandevilles along this route but fear not, they appear in my next post when I revisited the route.

Next I took a walk from Trafalgar Square to Oxford Road and back down again to Victoria Embankment Gardens. 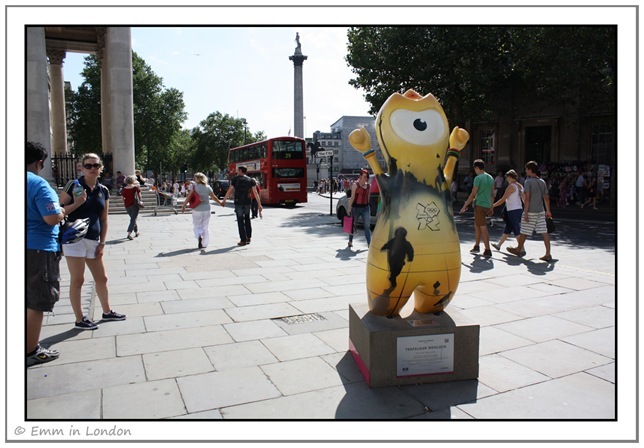 First on our trek, we spotted Trafalgar Wenlock who was pretty thrilled to be standing with Nelson's Column over his shoulder. You can spot Nelson's Column on the left side of his head, too. 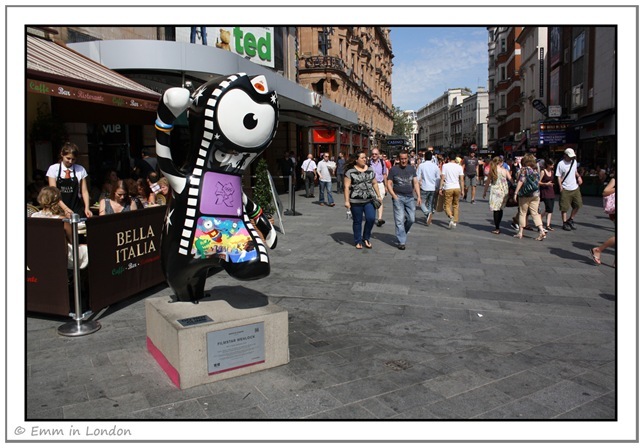 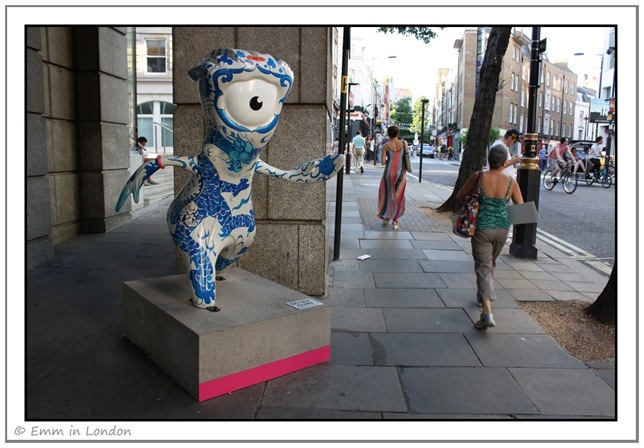 Just behind Leicester Square, you will find London's Chinatown. Strangely enough, we spotted Chinatown Mandeville a street or two east of China Town. Nevertheless, I just loved his China white and blue design. 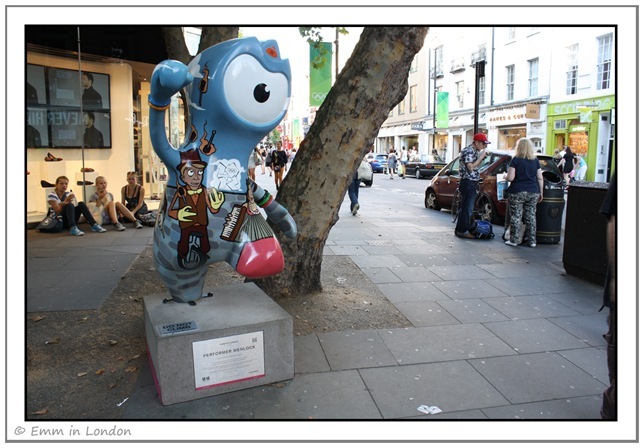 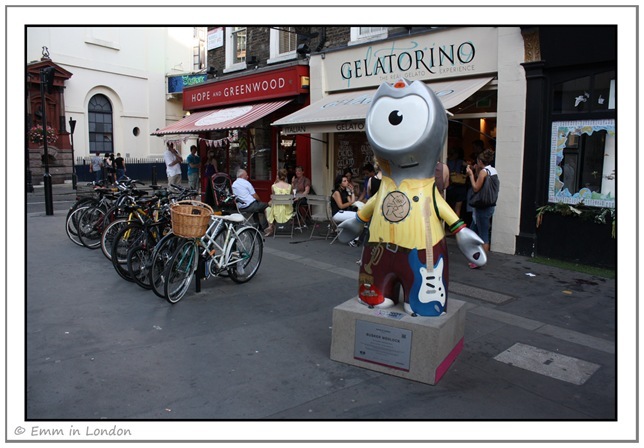 If you've ever travelled the London Underground, you will have listened to a busker at one point. They range from the spectacular to those that have room for improvement and Busker Wenlock stands for them all. He is located just at the edge of Covent Garden as you exit towards the Strand. 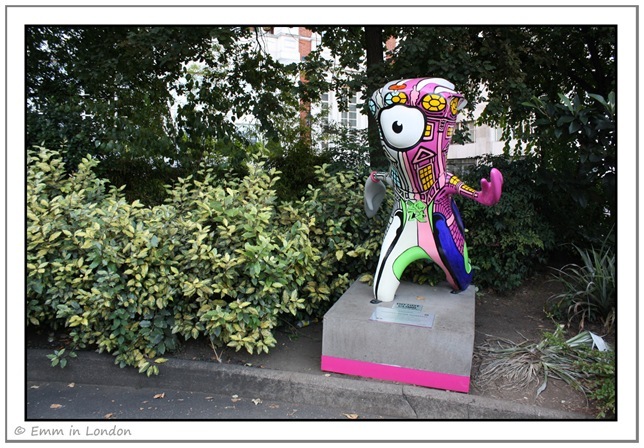 Somerset House Mandeville represents the famous Somerset House arts and cultural centre on The Strand. I have to admit that I have never been inside but now that I have looked it up, I am definitely going to make a plan! It is also round the corner from my office, so no excuses! 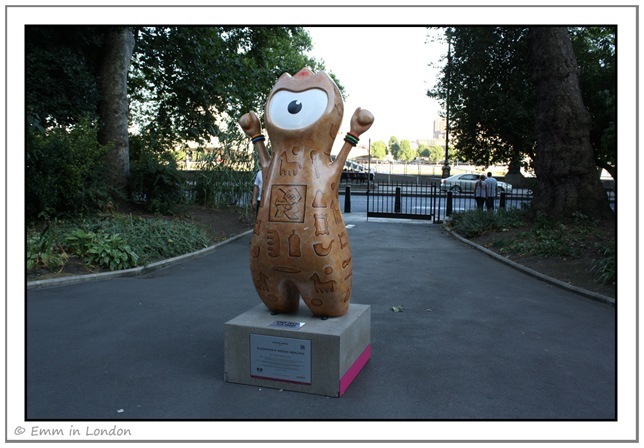 Perhaps the favourite of all of the Wenlocks I discovered on this walk was Cleopatra's Needle Wenlock. Cleopatra's Needle is one of those landmarks that I can't help photographing time and time again (the first time was here) and I just love this little thing with hieroglyphics all over his tummy. 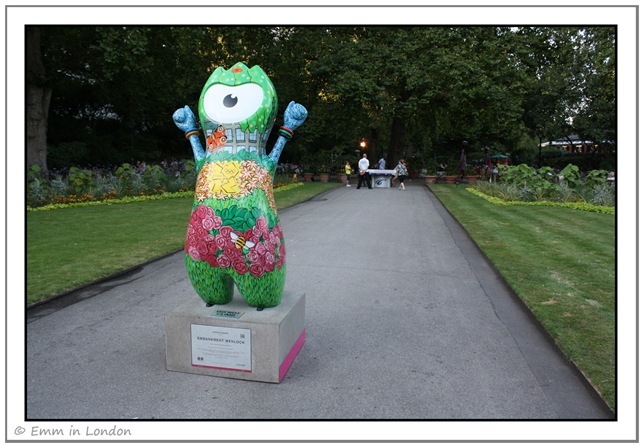 And our final Wenlock for today, Embankment Wenlock represents the Victoria Embankment Gardens and it beautiful sculptured gardens and the Embankment that was constructed to tame the north bank of the Thames during Victoria's reign.

So have I convinced you yet or do you still find Wenlock and Mandville creepy, ugly and slightly frightening? Well, I hope you won't mind too much when I take you on a Wenlock and Mandeville tour of Leadenhall, St Paul's Cathedral and Bankside.