A Fantastic Day Out at the Mayor’s Thames Festival 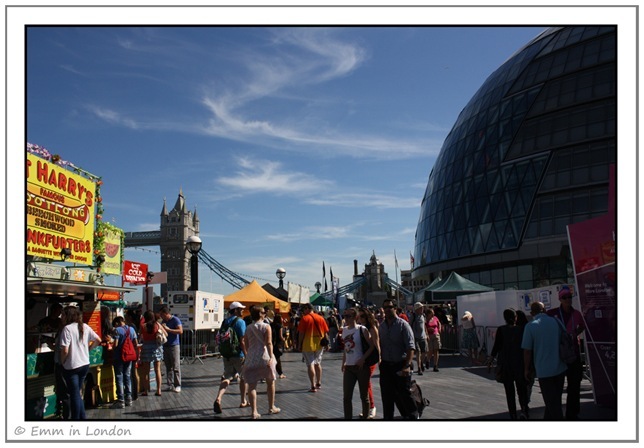 On Saturday afternoon, we made the most of the last great day of summer and headed to the Mayor’s Thames Festival.  The festival is held every year in September to mark the end of the summer and what a celebration it was! This year hundreds of thousands of people attended and London was packed!

We began our own tour at London Bridge and headed down past City Hall to Tower Bridge.  We wandered through the street market, marvelling at the gorgeous handbags, trinkets and fresh food stalls but kept going as we were just at the beginning of a long day. 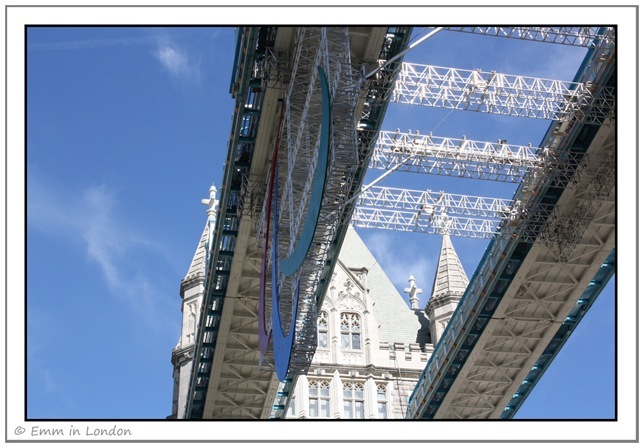 It was a lovely warm day and it occurred to me as I walked over Tower bridge that I can’t remember when last I did so.  It is such a grand old bridge and the atmosphere was festive and jolly. 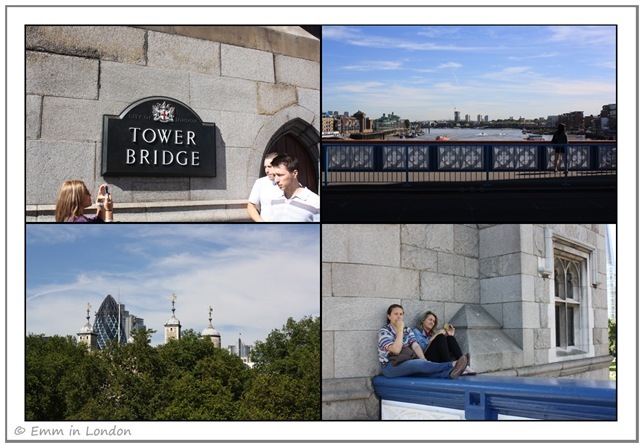 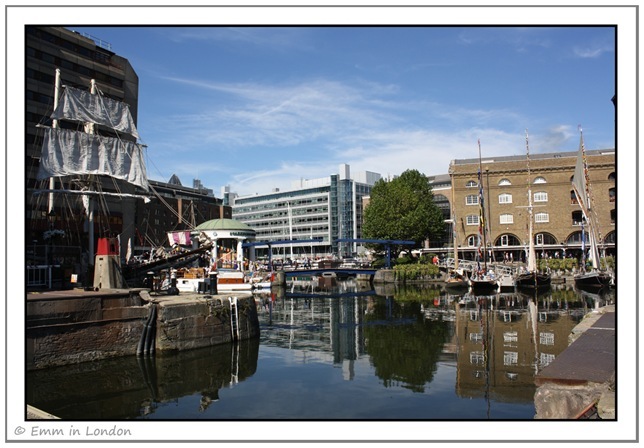 After walking around St Katharine’s Docks twice, we still had some time to spare and went in search of something to eat.  We were really lucky in that we ate some truly fabulous food.  First up was dessert, naturally, and I chose a banana fritter from a stall serving all kinds of vegan delights including crumbles, mud pies and fruit puddings.  Can I just say that the chaps serving were just lovely?

Next I had a Turkish feta flatbread from Kilikya's with spinach in yogurt, roasted red peppers, olives and hoummus.  It was simply astounding, perhaps the best Turkish food I have ever had. 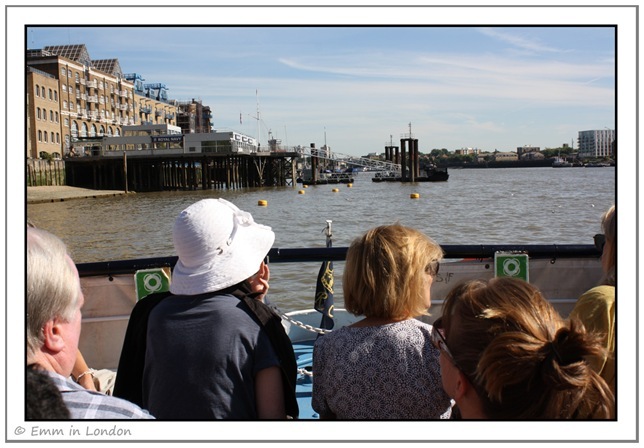 There was a free river taxi shuttle between St Katharine’s Docks and Festival Pier.  The Captain had us in stitches with his excellent and hilarious commentary in which he subtly included some pretty adult jokes!  It was just fantastic. 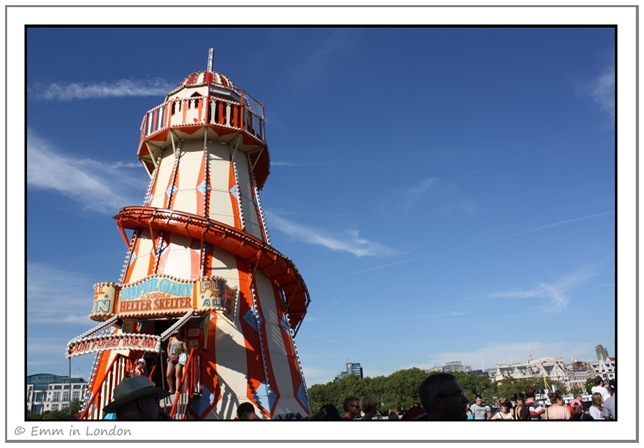 On arriving at Festival Pier, we made our way down to Gabriel’s Wharf.  This is a walk I take often in the mornings before work and it usually takes about ten minutes but on this occasion it took about half an hour!  The crowds were simply crazy and it was really hot too!  I was so thirsty and found that we were barely making it from stall to stall without buying more water or fruit juice  It was a really great summer’s day. 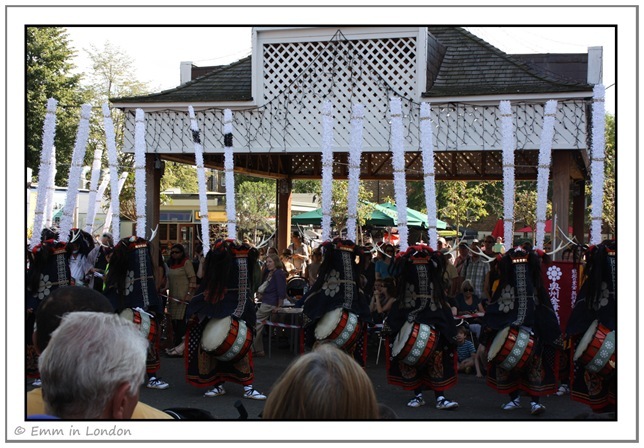 Our reasons for braving the crowds was to catch the Shishi-Odori dance by the Oshu Kanatsu-Ryu Dance Troupe.  It was a really good performance but was understandably short as the dancers needed to take a rest due to the heat and their elaborate costumes.  The crowds were ten-people-deep around the dancers and it is a pity that they weren’t in a more open area.  I would have liked to have seen them better (and there is a lovely, open park with a natural bowl next door to Gabriel’s Wharf). 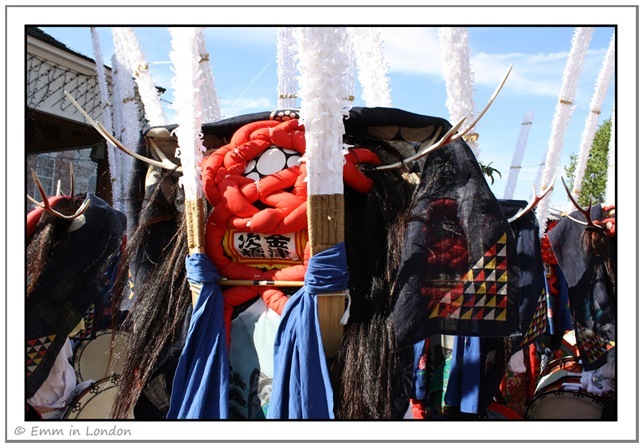 I did get a closer look at their costumes.  Can you imagine wearing that never mind dancing in it? 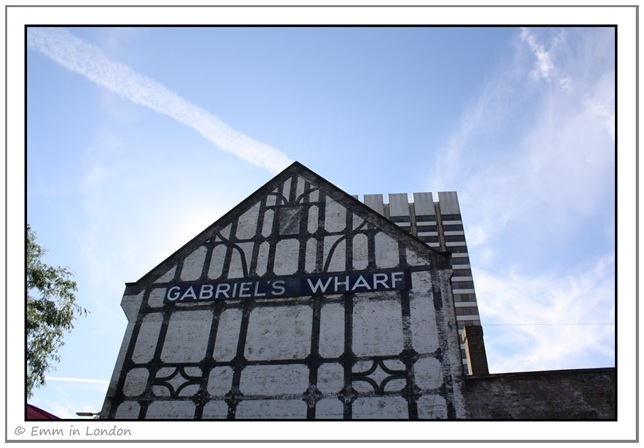 Have I mentioned how much I like Gabriel’s Wharf?  I’m usually walking through it at 8am or passing through on the weekends.  I do hope to spend an afternoon there one day. 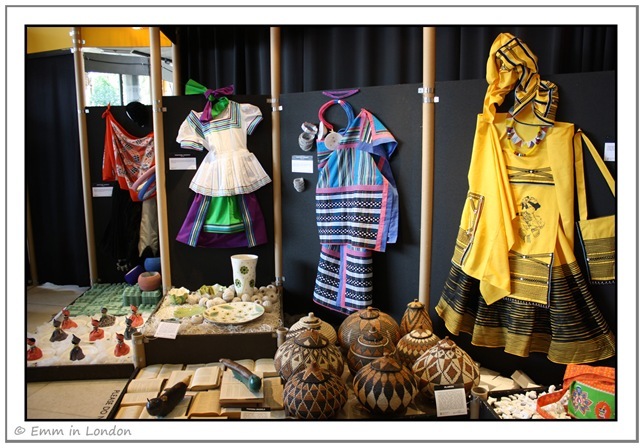 Our final stop wasn’t strictly part of the Mayor’s Thames festival but it was our last stop of the day. We went to Ekhaya (South Africa’s Home Away From Home during the Olympics) at the Elizabeth Hall in Southbank.  We have 11 official languages in South Africa reflecting all of our different cultures, so in the photo above, you can see the traditional dress of four of those cultural groups: SiSwati, SePedi, TshiVenda and IsiXhosa.

What a fabulous, colourful, warm and festive day.  And best of all? It was all free, except for our food and drinks of course.  I can’t wait until next year.

Of course, it seems that the whole of London received the end-of-summer memo because come Monday morning, it was cold, grey and gloomy and certainly not t-shirt weather anymore.  What a pity, it was a short but fabulous summer.